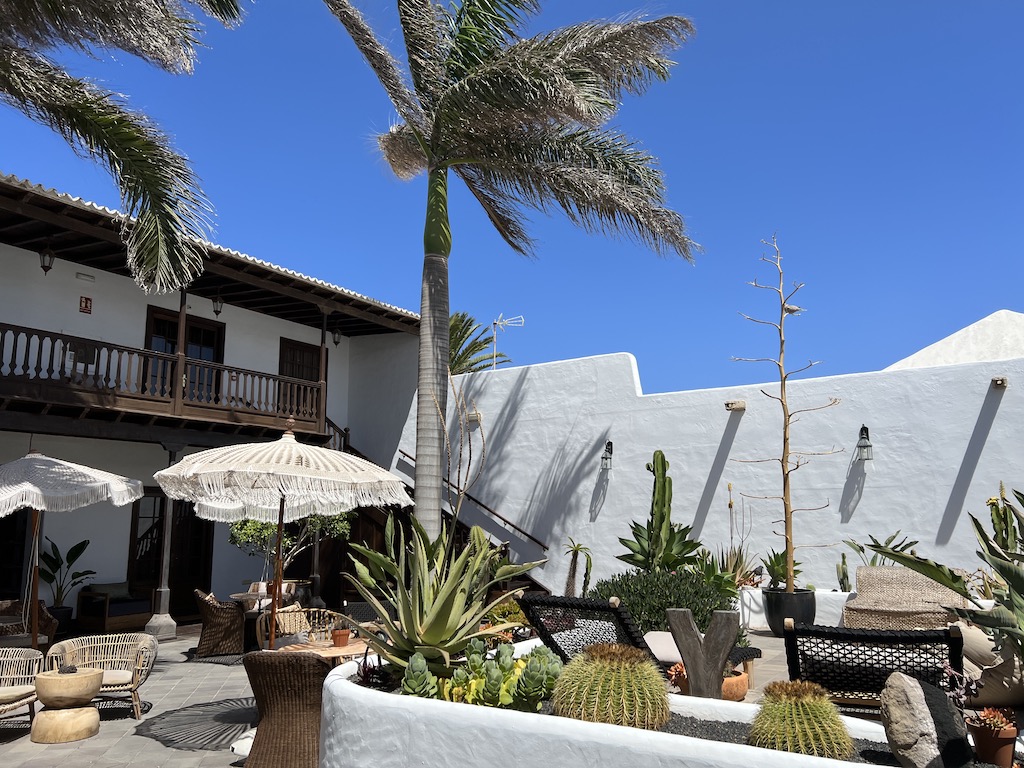 Palacio Ico is one of Teguise’s magnificent original buildings, built in 1690. It was extensively restored in the early 2000’s and is now a Boutique Hotel, with nine suites and a restaurant. Two things make it really special – the wonderful Canarian courtyard, and the incredible quality of the woodwork on the ceilings and balconies.

Soon after the restoration, we had an office in the building for a few years, and we were looking forward to seeing the place now that it has opened as a hotel.

We visited for lunch with friends. The restaurant is on the right as you enter through the main doors, and is a fairly large room, with views to the courtyard on one side and the cobbled street on the other. The decor is classy, the ceiling magnificent, and the ambience is tranquil.

The chef at Palacio Ico is Victor Valverde and the focus is on local, natural produce. We were offered a tasting menu, but we elected to choose our own dishes on this occasion. I’m always reassured when a menu only features a few items, and that’s the case here. Locally caught fish and produce from the island features in the selection, as well as Lanzarote wines.

Click and photo to open the gallery and see the descriptions.

Victor has worked in Michelin starred restaurants around the world, and it shows in the presentation of the food, and the interesting combinations.

We were given a complimentary tapa of Almogrote as the wine and water were delivered.

Julie chose a beetroot salad as a starter, which was huge! The beetroot was served three different ways, and topped with caramelised walnuts and balsamic vinegar.

I had Salmorejo, which is a dish I love, and this one was made with locally grown tomatoes from Tinajo, and served with a very unusual addition – passion fruit ice cream. It worked beautifully.

For mains, Julie went for fish ceviche, served with tropical fruits and a ginger and lemon dressing. She elected for the white fish version, but tuna and vegetarian options were also available. It was a really interesting dish, with crunchy corn kernels, contrasting with the fruit and the sharpness of the ceviche and very mouthful was a flavour bomb.

I had the Black Angus steak, which was perfectly cooked to pinkness, seasoned exactly as it should be and it was served with a rosemary gravy and tiny local potatoes and seasonal vegetables.

Our companions also tried the Uga Smoked salmon, which is always splendid, and the salmon sashimi, which they kindly let us try, and it was declared the dish of the day. It was served with crispy rice and a chipotle sauce.

We enjoyed a bottle of Vulcano Tinto wine, but we also wanted a white, and the waitress offered us one we haven’t tried before. This one is from Femes and is called Soco. It uses a blend of Malvasia, Diego and Listan Blanco grapes, and is very drinkable.

We weren’t planing to have desserts, but we were persuaded, based on the descriptions the waitress gave us, and boy, they were very good and so incredibly rich!

The service was a little slow to start with – we seemed to wait an age for menus and our first drinks, but it got better and better as we went along. It was as though we weren’t expected, despite the fact that we’d booked. But the food was very special, the presentation of it as good as I’ve ever seen, and the setting was wonderful. We especially loved the obviously hand made dishes used for each course.

Our bill worked out at €60 per person, including tip, but we didn’t skimp on anything, and you could eat well for much less.