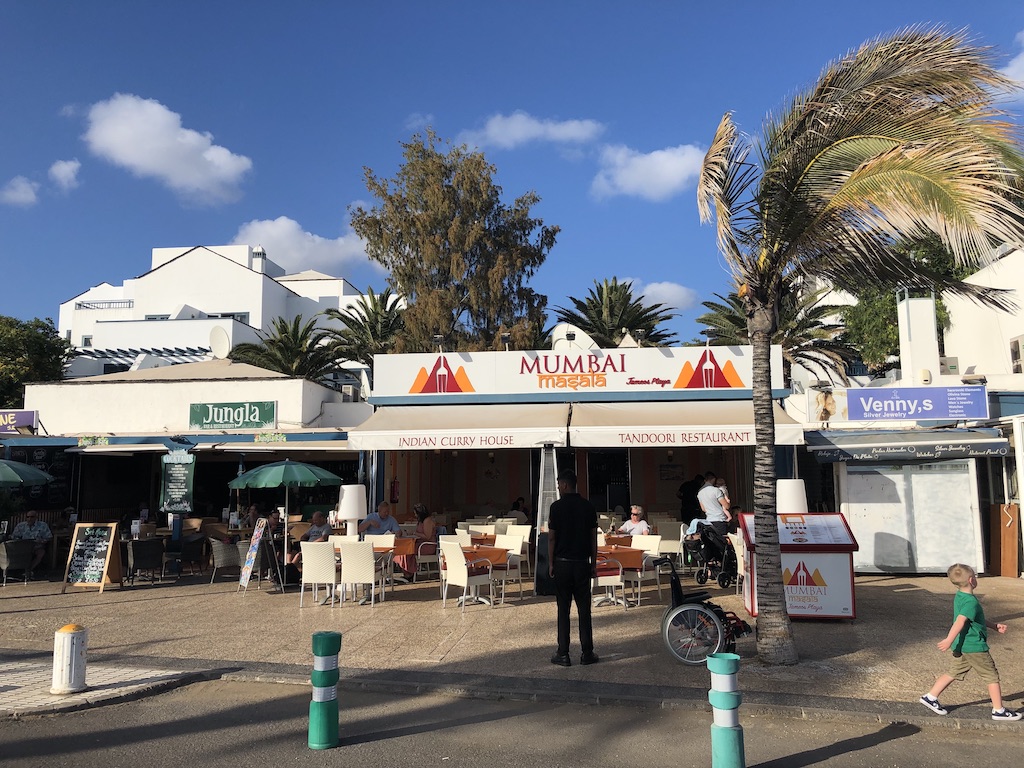 We were quite surprised to see a curry restaurant sitting firmly in the top three restaurants in Puerto del Carmen, according to reviews posted on Trip Advisor. So we decided to check out Mumbai Masala!

The Mumbai Masala is in the parade at Jameos Playa, directly across from Los Pocillos beach. It’s unusual for a curry restaurant in that the whole front is open and it’s decorated in a very light, airy style. The staff are very smartly dressed and the whole place feels modern, crisp and kind of cool.

You’ll find all the usual suspects on the menu, but we tend to look for something different when we go out for curry, so we both chose from the list of house specials.

For starters, after having crunched some poppadoms, we shared a Lamb Samosa and a dish of Ragda Pattice. The samosas had a fabulous crunchy pastry with very fragrant minced lamb. It was tasty, but I felt it could have done with more of a chilli kick. The Ragda Pattice was fabulous, though. Described as “Potato cutlets topped with chana masala,” I’d call it potato fritters (think rosti) served in a curried chickpea sauce. The potato was crunchy and tasty and the sauce glorious and rich, and finally the chickpeas, so often served mushy here, were perfectly cooked.

We enjoyed being offered the chance to take a break before our main courses, and we noticed the waiting staff engaging really well with every table, especially those with children. Curry restaurants can often seem quite dour and serious, but this one is very different in that respect.

For mains, I chose the Mumbai Masala tikka platter and Julie went for Afghani Gosht. Mine arrived in a sizzle dish with lots of smoke and consisted of chunks of beef and lamb tikka with “Chef’s secret touch.” The tikka marinade was delicious and quite delicate, and the onions and peppers had also been sizzled in it, so although it’s a dry curry, the flavour permeated well. The meat was tasty and rich, although the lamb chunks were pretty tough, and for that reason, I wouldn’t choose this dish the next time.

Julie’s Afghani Gosht was simply amazing! Lamb again, but this time very tender, served in a curry sauce with boiled eggs and Arabic spices. One of the best, and most innovative curry dishes I’ve tried.

We shared some perfectly cooked pilau rice, and a chilli nan, with the freshest greenest chillies in the mix, and we washed our meal down with a couple of bottles of Cobra beer.

I can see why Mumbai Masala scores well on Trip Advisor – it’s a cut above most of the curry restaurants we’ve been to on the island, and we love the ambience, the service and the different dishes on offer.

Our bill came to €64, but we did choose two of the more expensive main courses – knock €10 off that if you’re likely to go for Chicken Madras, a Korma or a Biriani.

Mumbai Masala Jameos is at Centro Comercial Los Jameos, Local 26, and they are open from 1200 until 2300.