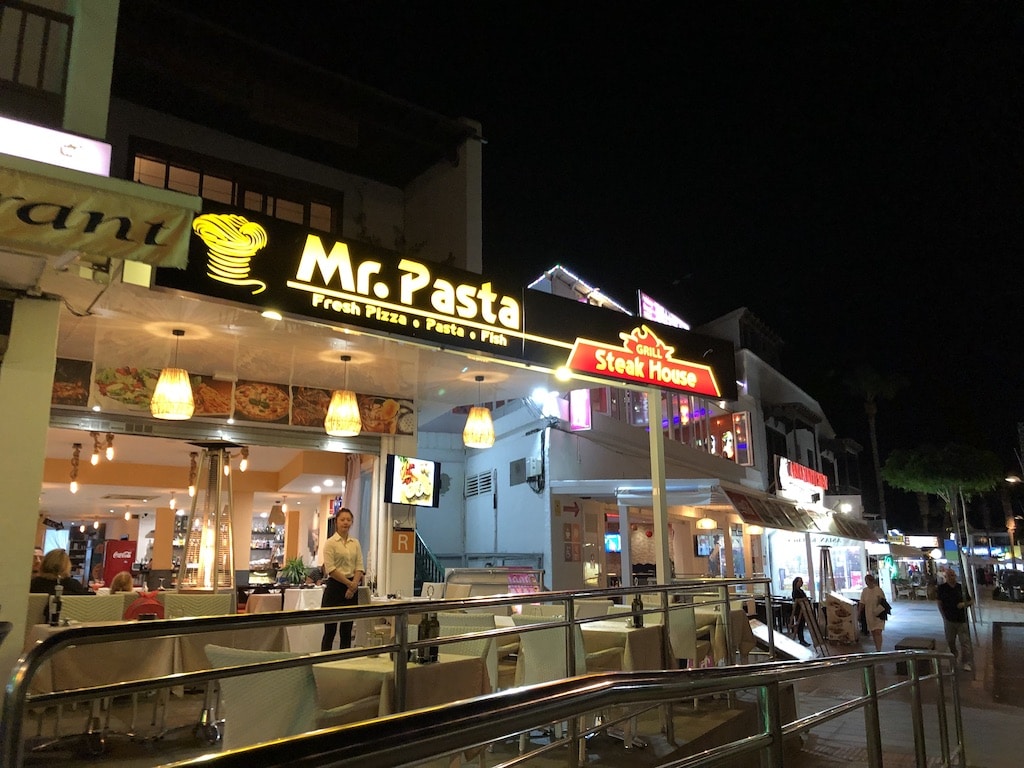 Several readers contacted us to suggest we visit Mr Pasta and so we headed to Puerto del Carmen one Friday evening.

I spent the day thinking about tagliatelle and ravioli, and wondering if they would have one of those full bodied Italian reds that go so well with a rich pasta sauce. But in the event, as you will see, I was more tempted by some of the large range of other food on offer.

Mr Pasta is well located in Puerto del Carmen, right on the avenida, and slightly above the main pavement, so you can watch the world go by. We chose to sit inside, although there’s a large terrace at the front. The restaurant didn’t have a PR waiting outside to entice us in, which I always think is a good sign. The front of house staff greeted us and offered us a choice of table.

I think the outside signage is a little garish, but the decor inside is tasteful and the whole place, including the washrooms, was incredibly clean and tidy.

The menu is extensive – as well as the obvious large range of pasta dishes, including some quite exotic offerings, there are pizzas, chicken dishes and a really big choice of steaks.

In her research, Julie had heard about a starter they do, which was deep fried banana wrapped in bacon. To her consternation, she couldn’t find it on the menu, but when she asked the waitress about it, she was immediately told she could have it.

It duly arrived, looking a little like spring rolls. Pieces of banana had been wrapped in bacon, coated in a very fine breadcrumb, and then deep fried. It sounds strange, but it was absolutely delicious!

For my starter, I chose deep fried camembert served with a redcurrant jelly. It came as triangles, again coated in crumb and then cooked until meltingly perfect. It was beautifully presented, with wafer thin pineapple slices in the centre.

Julie chose Chicken Cacciatore for her main – a dish I remember well from my youth, and one I haven’t seen on offer in Lanzarote before. It’s pieces of chicken breast with mushrooms, cooked in a very rich red wine sauce. The sauce was really special – full of flavour and perfectly seasoned.

Despite my plan to eat pasta, I was seduced by the range of different steaks on offer. Two in particular caught by eye – a filet mignon with a brandy and cream sauce and a fillet, again in a brandy sauce. I asked the waitress’s advice, and she didn’t hesitate in recommending the latter. The steak was a fabulous piece of meat – cooked just right, tender and tasty. The sauce was a little heavy on onions, and could have done with more of a kick – I like highly flavoured foods.

Both dishes were served with home made fries, and mixed vegetables served in a tempura batter, which was a pleasant surprise.

Neither of us went for desserts, but Mr Pasta has an extensive tea and coffee menu, so Julie went for a herbal tea, and I chose a Calypso coffee as it was her turn to drive.

The service really stood out for me – very attentive and professional, and both the waiter and waitress were chatty and took pleasure in our enjoyment of the food.

Our total bill was €65, including a beer, a glass of wine and water. We chose more expensive dishes from the menu, and you could eat there quite well for 30% less.

Next time, we’ll try the pasta!

Mr Pasta are on The Strip, at Avenida de las Playas 43 and they have a Facebook Page.

Playa Blanca
32
From £570 per week
Get our newsletter!