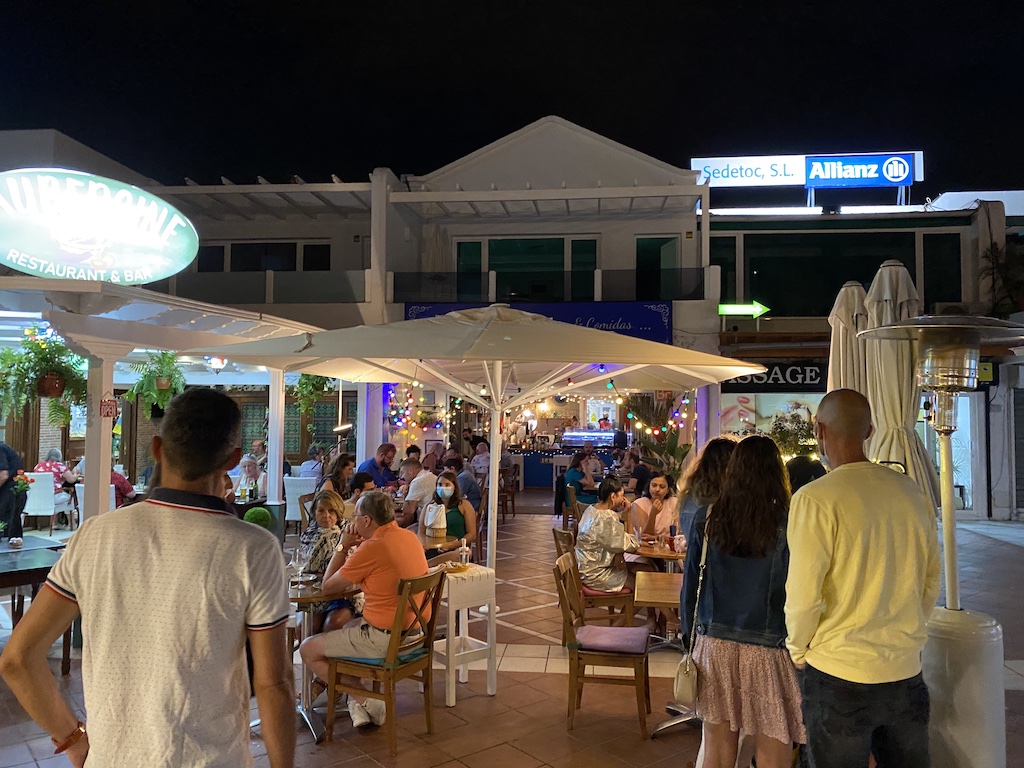 This one has been on our list for too long. We’ve noticed it’s consistently full of people when we’ve walked past, and we took the opportunity to try it out with some friends recently.

To give it the full name, it’s La Carmencita del Puerto, and it’s set slightly back from the avenida de las playas, in Centro Comercial Maritimo.

This is the story of La Carmencita del Puerto and after whom the restaurant is named.

Legend has it that Lanzaroteña Carmencita was a girl who was born into this world in the early 19th century, she was pure of heart and nature had been generous with her, she was the most beautiful girl in the village. She fell in love with a man they told her not to. Cienfuegos Perdomo, a smuggler and pirate.

He smuggled camels from the African mainland to Arrecife and preyed upon other boats as the opportunity presented itself.

Carmencitas’ love for Cienfuegos proved strong, he had decided to give up his wicked life after his next run, for a life with Carmencita. His luck didn’t hold out it seems and he never returned

Some say he died fighting other pirates, or he’d been enslaved, but most likely he was another of king Neptune’s victims.

For ten years Carmencita went to the port daily, waiting for her man, on the tenth year in despair, she threw herself to the mercy of the ocean. She was never seen again, except for the local fishermen who reported seeing her and hearing her wailing in pain, looking for her love.

Back to the restaurant……

We had pre booked, and I would strongly advise doing so – La Carmencita attracts both tourists and locals, which means they’re busy all through the evening, as locals tend to eat much later.

We were greeted by Irena, who asked if we had been before. When we told her we hadn’t she explained the philosophy of the restaurant and how things work there. She told us that their tapas is for sharing and recommended we order one dish each to start with. She explained they only offer good wine, and it’s €4.50 a glass or €20 a bottle. She also explained that if they brought anything to the table we didn’t like, we could return it and order something else, without charge. Irena did two things that really impressed me – when she spoke to us, she crouched down to be on the same level as us, and while we were perusing the menu, she walked past with dishes for other clients, but took a moment to show them to use and explain what they were.

The menu is tapas style, and quite limited, which I always think is a good thing! There are smoked meats and fish, tostadas, where the tapa is served on a toast, house specials and salads.

Between us, we chose Smoked tuna, Chorizo cooked in cider, pork cheeks in sweet sherry, coronation chicken tostada, a goats’s cheese tostada and Codifsh served on a bed of vegetables. Every dish was very good, and featured some interesting twists and a real depth of flavour. The standouts for me were the tuna (wind dried and salted,) the pork cheeks (incredibly rich gravy) and the cod, which was super tasty and firm. Six dishes was possibly a little over the top, and we could have managed with four or five. Click any image to open the gallery.

Six dishes were plenty for us, so we didn’t choose to have a dessert, but you can see a photo of the dessert menu above.

One unusual thing about La Carmencita is that they don’t offer coffee, but we did receive a small chocolate bar each, and a complimentary chupito with the bill.

We loved the whole experience – the service, the food and the ambience. We’ll be back for sure. our bill came to just under €50 per couple and included a bottle of wine and water.