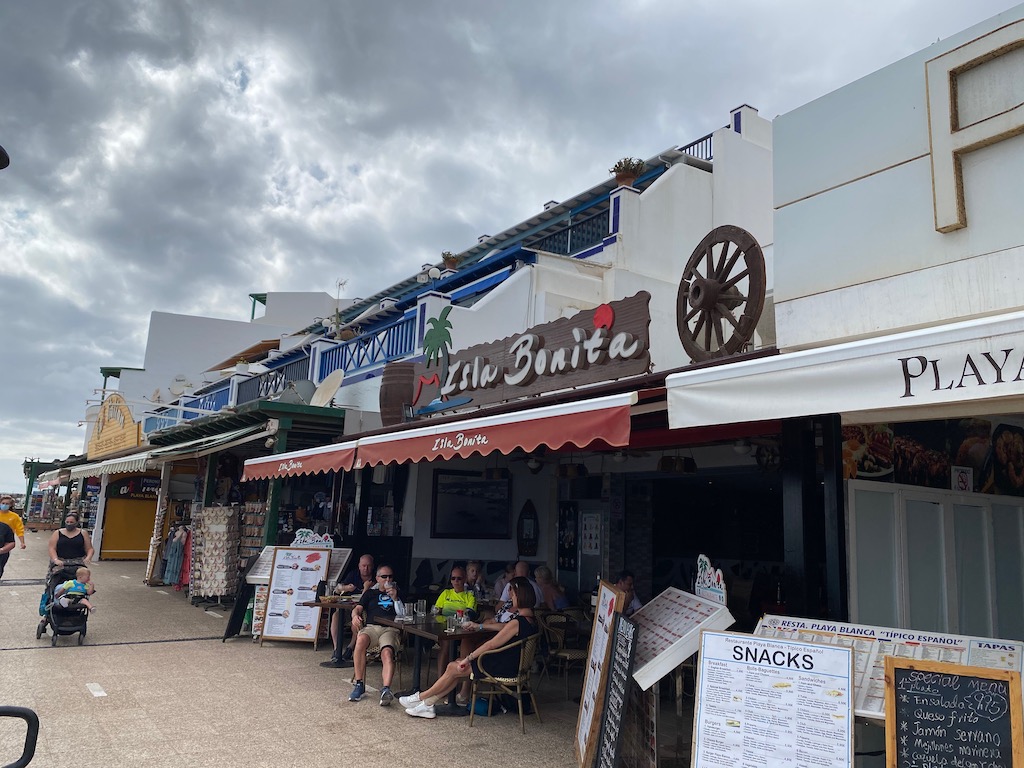 Isla Bonita has been recommended by a reader, so we decided to have lunch there as we had been working in Playa Blanca during the morning.

The location is great – one the Avenida Maritima, with fabulous views of the ocean and the comings and goings from the harbour. We chose a table in the shade but outside, and had the best of both worlds. It’s a small restaurant, but comfortable.

Our waiter for the day at Isla Bonita was Abdul, and he made us very welcome and took us through the menu del dia, as well as the a la carte options. I was hungry, and I’ve often found that menus del dia, while good value, offer small portions, so I decided to go for the normal menu and ordered Fajitas. Julie went for the menu, and I ended up with food envy! Not only were her portions “normal” sized, but the food was fabulous and it was incredible value for money at just €9.95 for three courses.

Julie chose garlic prawns with mushrooms as a starter – fat juicy prawns in lovely clear, garlicky and spicy oil – perfectly cooked and presented. She followed that with the fish of the day, which was grilled sea bass, which was served with a “proper” salad, rather than a garnish, and Canarian potatoes. The fish was well filleted and cooked, heavily seasoned, and served with two mojos and garlic mayo.

My fajitas arrived sizzling, and were served with tortillas, guacamole, sour cream and salsa. They were fabulous – the kind of gently increasing burn you only get with the freshest chillies – and full of flavour.

As part of Julie’s menu at Isla Bonita, she had a dessert of vanilla ice cream, and again it was a large portion, and with a really intense vanilla flavour.

I have no doubt that the menu del dia is the one to go for here – it’s astonishing value for money, the choice is good and there’s plenty of food. It’s also worth noting that they are very generous with the wine by the glass, and also give out large chupitos at the end of the meal, on the house. Sadly it was my turn to drive, so only Julie was able to enjoy their generosity.

It’s worth mentioning Abdul’s service – Isla Bonita was quite busy, but we didn’t wait for anything, and he dispensed it with good humour and lots of banter, switching effortlessly between Spanish, English and French.

A great find, and one we’d highly recommend. They also have a loyalty scheme – pick up a card, and when you’ve had three meals there, you’ll enjoy a 10% discount from the fourth onwards.

Isla Bonita is at Avenida Marítima 59 in Playa Blanca – quite close to the harbour end of the promenade.

Playa Bastian D4 is a high quality apartment, newly refurbished and on one of Costa Teguise’s premier front line communities.