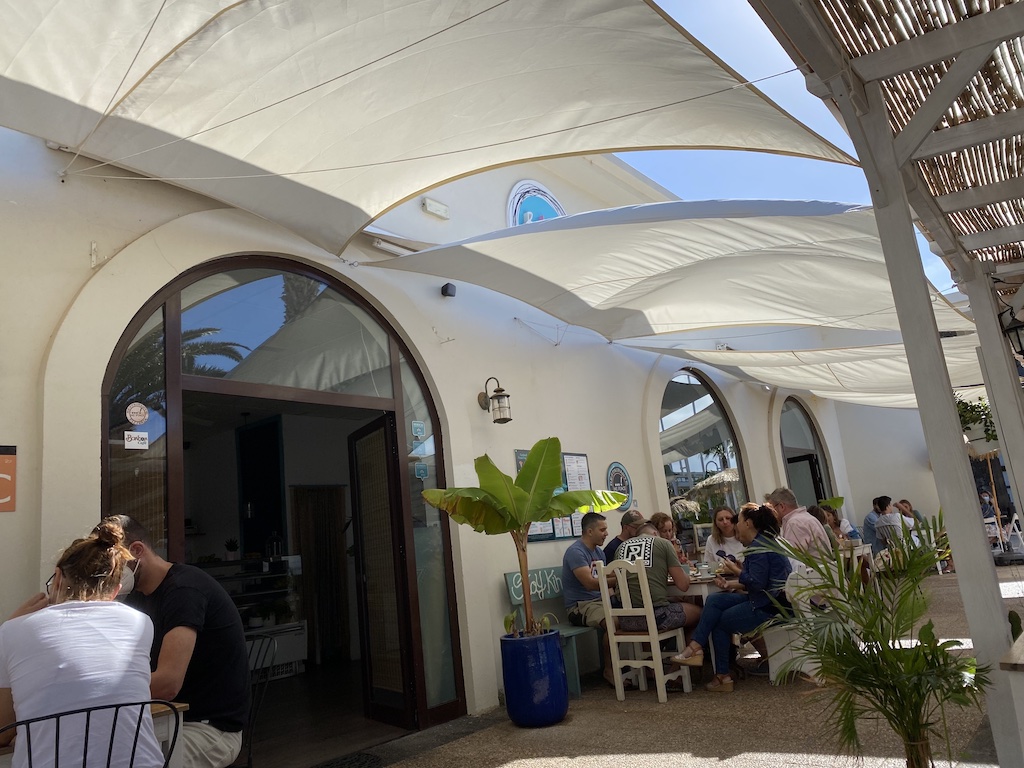 Bonbon Café has been one of the busiest places on the island all through the pandemic. Every time we’re driven past, there has been a queue of people sitting patiently outside, waiting for a table, so we knew we needed to visit, to find out why.

We enjoy a good brunch, so we headed down there on a Sunday morning to try out their offering. We arrived at 0930 and were able to nab a table straight away, although within half an hour there was once again a line of people waiting for a space. Bonbon Café is a street café, so all the tables are outside, but there’s a large canopy if you prefer to eat in the shade. There were loads of staff on duty, and we were quickly settled and given a QR code for the menu.

As it was brunch and we wouldn’t be eating again until the evening, we decided to go big! I went for toast with serrano ham, avocado and tomato, and Julie chose a toast with avocado and fried egg, and then we ordered a stack of pancakes each! I had a chocolate milkshake (delicious and thick) and Julie had freshly squeezed orange juice.

The toasts were spectacular. Julie’s was served on a seeded bread, perfectly cooked seasoned, and drizzled with olive oil, while mine came on half a baguette, with the freshest crushed tomatoes as a base for the avocado and a fabulous quality ham layered over the top. It was a winning start.

I had wanted a stack of pancakes with bacon, in the American style, but when I checked, there was no maple syrup available – Bonbon uses golden syrup instead, which I think is a poor substitute. Instead I went for a stack with Nutella, banana and crunchy almonds. The pancakes were beautifully cooked, and smothered in all kinds of goodness.

Julie chose the stack with bacon and syrup, and asked for her bacon to be crispy. She was a little disappointed that the bacon wasn’t crispy, and looked more like ham. We both felt we over ordered, and although I manfully cleared my plate, Julie was unable to do so. In retrospect we agreed that we should have stuck with the toasts and ordered a fruit bowl instead, to finish the meal off.

The service was excellent – as I said before, there were loads of staff, and they were smartly dressed, young, multi lingual and obviously happy to be at work.

We’ll be back, for sure!