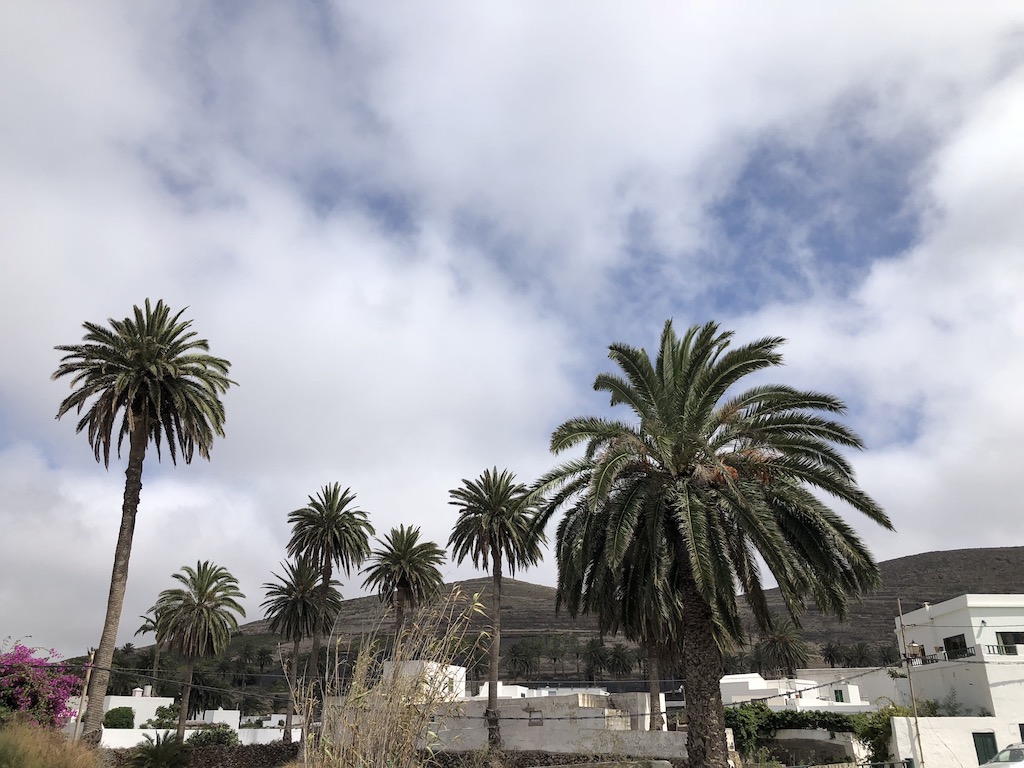 There are over 2000 species of palms in Lanzarote. But the two most common Lanzarote palms, which you will see everywhere on the island are The Canarian Palm and The Washingtonian.

This palm is a protected species and found all over the canary islands. They are slow growing but can reach a height of 20 metres over a hundred years and have a thick trunk which can be cut in various designs when trimming leaves. The leaves are over 6 metres in length with sharp spikes at the base of the stem, and the top is shaped like a fan or ball depending on when it was last trimmed. There are male and female specimens, the male has yellow/white flowers and the female produces orange red fruit during spring / summer. The támaras (fruit) look like small dates but are not generally eaten although edible. The Canarian palm was valued by the locals and is still utilised today, the guanches used to eat the young leaves and fruit and the leaves also were made into baskets, hats, brooms, fishing nets and even clothing. On La Gomera they extract the sap to produce palm honey.

The way to identify the Canarian palm is by the leaf, it is long and shaped like a banana!

The best place to see these Lanzarote palms is in Haría, the valley of a thousand palms.

There are two kinds of Washington palm found in the Canaries, the Washingtonia Filifera is better known as the Californian Fan Palm and the Washingtonia Robusta the Mexican Fan Palm. These trees are fast growing and with plenty of water can reach heights of up to 25 metres and can withstand being near the sea. Both of the Washingtonias  have leaves up to 2 metres in length, the Mexican species has a slimmer trunk. They have small white flowers that branch out from between the leaves and small brown fruit.

The way to identify the Washingtonia palm is that the leaf is fan shaped like an open hand!

The Red Weevil is a destructive palm tree pest, a female weevil will lay about 300 eggs in separate holes on a palm tree, these eggs hatch within 2-5 days and the grubs bore into the interior of the palm feeding on the soft tissue. The larvae stage lasts from 1-3 months and then the grub pupates into a cocoon for 14-21 days when the adult weevil emerges.

Weevils like new palms, ones under 20 years old as the flesh is still soft, it can be hard to determine if a palm tree is infested as the larvae are buried deep inside, an infected palm tree can often die. The Canarian government restricted the movement of the Canarian palm tree Phoenix Canariensis in an effort to control the pest, trees should be trimmed regularly but its important to leave 120cm from the base and treat the cut so that this open area does not attract the females to lay their eggs, any dead palms found to have the weevil are cut down and burned.

The island of La Gomera produces a syrup from the Canary Island palm tree (Phoenix Canariensis) called Miel de Palma. During the months from January to June, the farmers climb their trees and remove most of the leaves from the crown of the palm, they then cut a hole in the top to create a pore and each night climb up the tree to remove the crust and place a bucket under the drain where up to ten litres of sap can collect over night, in the morning the farmer returns to the palm to remove the bucket and waits until nightfall to begin the process again. The sap known as guarapo is harvested at night as it spoils in the sunlight, the removal of the sap doesn’t harm the trees, they resume normal growth after the harvesting period and can be tapped every 4-5 years. The sap is boiled for several hours until it forms a dark rich syrup when its bottled.

Here’s a walk where you’ll see lots of palms: From sea level to the top of Lanzarote.

If you enjoyed this article, you can get more just like in, it your inbox every week, bu subscribing to our famous Lanzarote Newsletter: