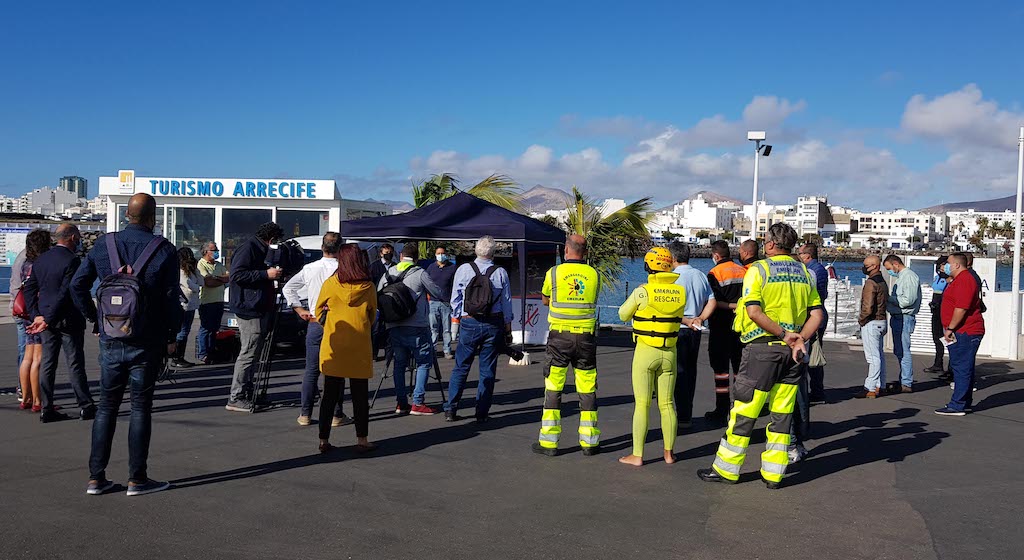 Lanzarote Back To Level 1

Lanzarote was moved back to level 1, the lowest level, of Covid restrictions this week. Fuerteventura is in Level 3, but all the other islands are now in 1.

The Cabildo has installed a buoy in the Chinijo Archipelago close to the islands of La Graciosa and Alegranza. It is fitted with pCO2, pH, temperature, salinity, oxygen and fluorescence sensors and a hydroacoustic instrument (ADCP) that will allow monitoring the currents of the area.

Businessman Juan Francisco Rosa, whose companies own both The Fariones and Prices Yaiza Hotels, is in hot water in the courts again, and will stand trial on multiple charges of financial irregularities. The prosecution is asking for 11 years in Jail time, if Rosa is found guilty, and the judge has sent bail at an astonishing €57 million to cover the civil liability if found guilty.

The largest Monkfish ever caught in Spain was landed off the coast of La Santa this week. It weighed a shopping 54 KG, when typically, those caught in this area are between 5 and 15 KG.

43 more Smart Bus stops are being installed across the island at a cost of €550,000. The new stops will show users arrivals updated in real time, using GPS trackers on the buses,

Travellers From Mainland Spain Now Have To Show Test Certificate

Travellers to The Canaries from mainland Spain now have to show either a vaccination certificate or proof of negative antigen test on arrival in The Canaries.

Human bones were found in a difficult to access cave near Famara by a walker recently. They have been dated to around 400 AD, 1,000 years before the Spanish conquest, and appear to be from an aboriginal burial site. The area has been earmarked for an archaeological dig.

As expected, tourism bounced back massively in October, with increases of 700% in income and 388% in arrivals during the month, compared to 2021. A total of 203,000 tourist visited the island during the month, and the occupancy rate on hotels and apartments was around 76%.

Vaccine Programme To Roll Out To 5 to 12 Year Olds

With the EDA’s approval of vaccines for 5 to 12 years olds, Spain will start offering jabs to this group on 15th December. They will be given two smaller doses than adults.

Passengers travelling to Spain from 1st December, from non EU countries will be required to be fully vaccinated with both doses of the vaccination. They will no longer be able to have a test, rather than proof of vaccination. Execptions are children under 12 and Spanish citizens and residents.

The UK has also changed their entry rules, which will affect visitors returning home from Lanzarote, who will now have to pre book a day 2 PCR test and self isolate until they receive a negative result, if they are fully vaccinated.

Rain arrived in Lanzarote over the weekend – the first substantial rain since last January. The amount across the island varied between 10 and 22 litres per square meter. The heaviest falls were in Tinajo and Famara.

The supermarket chain has confirmed that it will open 20 supermarkets in The Canary Islands over the next three years, including one in Lanzarote. The company will create around 400 jobs on the islands and these new stores will bring their total in Spain to 350.

One of Lanzarote’s best known residents turns 85 this week. Larry Yaskiel, who is British, has lived on the island since the 1970’s and he created and wrote Lanzarote’s first English language publication, Lancelot news in English. He also provides the English voice for the Timanfaya bus commentary and has written several books.