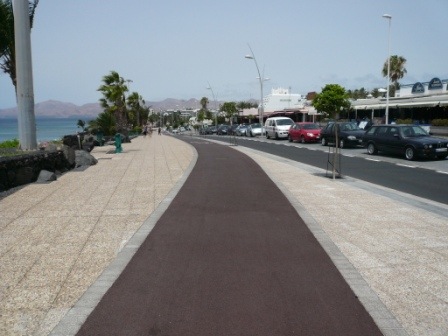 The driver of the car which went over a cliff at La Santa has died in hospital in Las Palmas, having failed to regain consciousness. The 75 year old was going to be investigated for possible homicide in relation to the death of her 80 year old passenger.

The yellow alert for high temperatures has been extended until Tuesday this week, with 36 degrees expected.

Air traffic between the islands is also on the rise, having increased by 2% versus 2021.

White Night In Teguise Attended By 15,000

Noche Blanca came back post pandemic with a real bang last weekend, as more than 15,000 attended the event at the old capital of Lanzarote.

A small team of German police will be working in Puerto del Carmen during the summer, alongside Guardia Civil colleagues. They will help to reinforce the local police service and help with communicating with foreign tourists.

Spain’s Prime Minister, Pedro Sanchez, will be spending his summer holidays on the island once again. Arriving on 2nd August, he will be accompanied by his wife and two daughters. Sanchez is a keen mountain biker, so you’ll be able to spot him on the trails around the island. The family will stay at the former King’s Home in Costa Teguise.

The German supermarket chain has confirmed that they will be opening their first store in Lanzarote. The store will be located on the Ramble Modular, and should be open in 2024.

Three flights had to be diverted to Fuerteventura on Wednesday, when gusts of up to 78kmh made landing at Cesar Manrique airport impossible. They were able to fly into Lanzarote within a few hours.

Lanzarote is bidding to become the headquarters of the European Tourism Agency, which will become operational in 2028 and will be dedicated to promoting sustainable tourism.

Buena Pesca has incredible views over the old town harbour of Puerto del Carmen and you can watch harbour activity from the balcony.