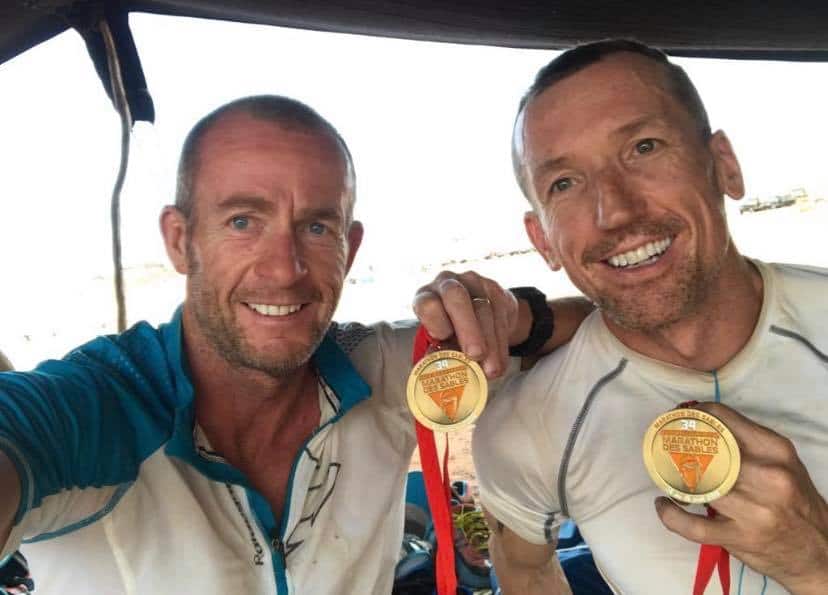 Many readers will have heard of Jason Wilkes. He’s one of the island’s most prolific endurance athletes, and is the founder and Managing Director of Car Reg.

Jason, his wife Jo, and sons Jack and Jorge have lived on the island for 15 years.

Not content with triathlons, he recently entered one of the toughest sports events on the planet – Marathon des Sables, also known as The Sahara Marathon. Based in the Sahara, in southern Morocco, and running since 1986, the six day event covers roughly the distance of 6 “normal” marathons, over six days, totalling about 250KM, or 150 miles.

We caught up with him on his return to Lanzarote to find out what it was like:

We know you’re a triathlete – how many Ironman events have you completed, and how many here in Lanzarote?
Yep, triathlon is where the passion is, I have done 12 full (7 in Lanzarote) around 25/30 half distance.

What gave you the idea to enter MDS?
Waking up to a message from a good friend of mine (Des, we raced Kona together). I actually had a hangover from hell but I said yep OK without really thinking! 😀

Tell us about the event and distances you have to cover
The distances and terrain vary from year to year, this year there was a couple of shorter (but tougher ones) 33/38/32/78/42/6KM (I think!). The terrain on all of them was tough, day 2 which was the dune day was double tough! Terrain varied from sand to rock, the rock was very tough on the feet!

You were raising money for the Ethan Maul Foundation. Tell us about that please.
Ethan, a friend’s son lost his life to cancer a couple of years ago. It does’nt get any worse than that, and is quite prominent in my mind having two boys. The charity helps families who are faced with the similar horrendous circumstances that Ethan and his family went through. I can not imagine the pain of that!

How did you prepare for the event?
Having never done anything like this before it was difficult, I mostly ran Monday to Friday taking the weekend off to recover with cycling. Monday, Wednesday and Friday were always long run days, building the distances then Tuesday and Wednesday I would use the treadmill and cross trainer for build and interval sessions. I also did quite a bit of gym work to strengthen the core, shoulders and glutes to carry the weight. Avoiding injury was very difficult with the volume!

What were the hardest parts for you?
Sounds strange but I / we always seem to forget the bad bits! Sleeping wasn’t the best, I do remember being very cold during a couple of nights with the sand/dust blowing in. I don’t remember thinking “WTF am I doing this for?” 😀

What was the best part?
I enjoyed the buzz of the long day, this was the longest I had run. It felt special being able to do what we were doing in that environment. The ultimate had to be the final parts of the last stage, crossing the last finish line 🙂 The banter in the “biviy” (tent) was awesome!

How many people competed this year, and were you able to make friends with other competitors?
I am not 100% sure how many people finished, I think around 700. We made lots of new crazy friends like Rob, he was a Forest Gump carbon copy right down to the beard and clothes, he was actually a vet from Liverpool! Henry & Howard who were ex-Army officers had many entertaining stories. We all had lots of laughs 😀 There were lots of extraordinary people!

Would you do it again?
If the circumstances were right, yes! It took lots of planning, I suppose next time I would know what I was doing a bit more and maybe wouldn’t faff so much. There are also many more other crazy things available to do….

Do you have any more adventures like this on your bucket list?
There are are a couple of other things I have been thinking about 😛

Jason, well done, we’re super proud of you and we look forward to covering your future adventures.

So far, Jason has raised over £4,000 for the Ethan Maul Foundation. You can still add to the total here: Just Giving.