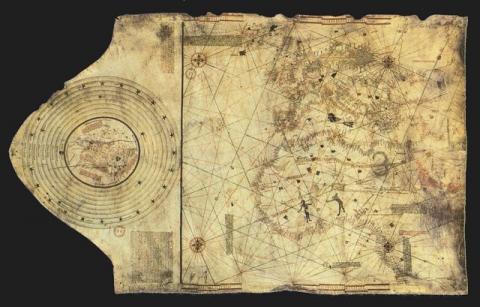 Did you know that Christopher Columbus set out from The Canaries for his journey to discover The Americas? He also called in to various islands here over the years, for food and fuel for his mammoth Atlantic crossings.

With the fall of Constantinople in 1453 the Europeans no longer had a safe passage over land to China and India, a valued source of goods such as silk and spices. Columbus was convinced that the passage was possible over the Atlantic sea, which covers around one fifth of the earth’s surface.

Columbus had problems gaining financial support for his plan, he had calculated the distance from the Canary Islands to Japan as 3,700km but the westward voyage was more likely to be around 19,600km and sailors did not believe any ship at that time would be able to make this journey without the crew dying of starvation and thirst. Columbus was very interested in the trade winds from the Canaries. Where he had been wrong in calculating the degrees and distance, he was to be proved right about the circular wind pattern in the Atlantic.

Columbus presented his plans to John II, the King of Portugal, Henry VII and Ferdinand II of Aragon & Isabella I of Castille (joint rulers of Spain). The King and Queen of Spain turned down Columbus’s plan as they decided he had misjudged the distance to Asia but to keep him on side in 1489, they gave him an annual payment of 12,000 maravedis and a letter stating that he could have free board and food at any Spanish city. Henry did agree to the plan after much consideration but Columbus had then committed himself to Spain.

In 1492 after Columbus had found private investors for half of the financing, Ferdinand and Isabella finally agreed that he would be made Admiral of the Seas and rewards for any new islands or mainland discovered. Columbus set sail from Palos in Huelva, Andalusia on the 3rd August 1492 where he headed for the Canary Islands to restock with provisions and on the 6th September he left San Sebastían in La Gomera. What is now called The Bahamas was sighted on October 12th, 5 weeks after setting sail from the Canary Islands. The Taíno (local people) were reported to be friendly. Columbus went on to explore and found the coast of Cuba on October 28th, later one of his ships ran aground and some of his men were left at Hispaniola, the second largest island of the Antilles between Cuba and Puerto Rico.

Christopher Columbus’s arrival in the Americas is celebrated on two different dates in October each year, there is Columbus Day in U.S.A., Discovery Day in the Bahamas, and Día de la Hispanidad in Spain.

Columbus went on with a number of voyages, each time stopping at the Canary Islands for food and water.

Columbus was imprisoned at the age of 53 for the atrocities whilst ruling Hispanola, it is said that within two and a half years of his rule 250,000 Taino were believed to have died. Columbus was rounding up the population and shipping them to Europe as slaves, those who remained tried to mount a resistance but in desperation they committed mass suicide to save them from the Spaniards. Columbus and his brothers were jailed for 6 weeks before being freed by Ferdinand. A new governor was appointed for the West Indies.

Christopher Columbus died at the age of 55 in Valladolid, Spain from a heart attack, he was suffering from Reiters Syndrome, a form of arthritis.

Read about the Spanish conquest of Lanzarote.