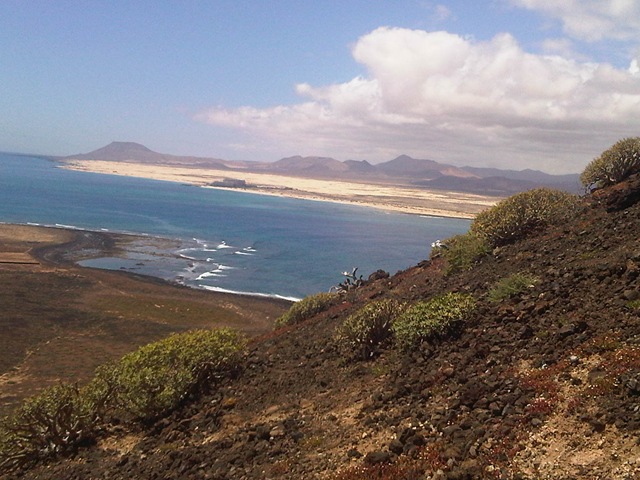 The island of Lobos is clearly seen from the East coast and South of Lanzarote, a nature reserve named after the seals that used to live there.

This tiny island is a sanctuary, it’s a peaceful place for walkers and nature lovers to enjoy. The Isla de Lobos is not inhabited, there is one restaurant to which the staff commute each day from Fuerteventura. The seals that used to inhabit the island were called “Lobos del Mar” which translates to the “Sea Wolves”, they were culled by the local fisherman many years ago so the only reference is now in the name and the seal family sculpture in front of the visitors centre. The Parque Natural Islote de Lobos was declared as a protected area back in 1982 with a special protection to cover the birdlife.

There are paths around the coastline of Lobos which covers a distance of 13.7km, the interlinking paths are all signposted with the time quoted in minutes to the destination. The highest point is Montaña La Caldera which translates to Cauldron Mountain, the climb of 127m is worth it for the panoramic view from the top.

We took a day trip to the island with Oscar from Rubicón Fishing, he takes parties of up to 12 people from Lanzarote to Lobos. We departed from Marina Rubicón in Playa Blanca at 09:30 to cross the 8km La Bocaina channel which separates Lanzarote from Fuerteventura. The crossing was smooth and it wasn’t long before we were cruising into the lagoon of El Puertito (small cute port). The water here was amazing, cristal clear and turquoise blue, when we arrived the tide was low and the no depth at all, Oscar explained there is a large tidal difference which is why the mooring pier was way above our heads!

We set off walking to the right, taking the route marked in an anti clockwise direction towards El Faro (the lighthouse), there are signs asking you not to leave the marked routes so please when you visit stick to the paths indicated. We passed the area of Las Lagunillas, the sea was out exposing the sandy bottom and leaving salty lakes cristalising in the sunshine. You must watch the video, we haven’t added music as you need to hear the peace – we hardly saw a sole out walking with just birdsong and the sound of the waves crashing onto shore whilst we walked. Between this area and the lighthouse we had a special moment where three “pollos” baby chicks called out from the hillside next to us, we initially thought they were pardelas but could also have been seagulls (again, you can see them on the video). We arrived at the most Northern point of Faro Martiño where we climbed the path up to the lighthouse, there is a geocache hidden here which we found (Lighthouse Fuerteventura Faro Lobos) whilst admiring the view back to Lanzarote where you could clearly make out the lighthouse in Playa Blanca.

A famous writer Josefina Pla was born in the lighthouse at Lobos in 1903 and there is a plaque marking this at El Faro plus a head sculpture outside the visitors centre. She moved to Paraguay after marrying artist Andres Campos Cervera where she lived until her death in 1999 having received many literary awards for her human rights work.

We continued our route towards the highest point of Montaña La Caldera, where we took the path up the corona. It would be advisable to wear trainers if you want to take this path, we were in flip flops and made it up the hill but it would have been much easier in sturdier footwear. Along the path to La Caldera is an information point explaining that this area is an important nesting site and if you want to climb to the top not to make any noise during the walk so that you don’t disturb the nesting birds.

There were many birds visibly nesting on the hillside, the stones along the pathway were splashed with what looked like white paint but of course were bird droppings – we didn’t receive any good luck charms of this nature during our climb up! The view from the top is fabulous, you can clearly see across the 2km stretch to Corralejo and Fuerteventura as well as the lay of the land of Lobos.

We began our descent and followed the path past the Salinas and camping area (requires special permission) to the beautiful beach of Playa de La Caleta which was crying out for us to stop and have a swim. We had ordered lunch at the restaurant for 13:30 so continued on our way calling in to the visitor centre which is a fabulous wooden chalet with lots of information about the island including leaflets to take away as well as toilet facilities.

The larger ferries stop at the pier here to drop off and collect their passengers each day. We checked the boat mooring with the rising tide, taking a moment to enjoy a cold beer before making our way to the Restaurante Los Lobos for lunch.

The menu consists of fresh fish or paella, Oscar had phoned ahead to order both for our party which was served as we were seated. We didn’t touch the bowl of potatoes, red mojo sauce or bread that accompanied the dishes as we thoroughly enjoyed the large portion of local fish which had been freshly caught that morning and deep fat fried plus the paella stuffed with prawns, mussels and a tangy squeeze of lemon. This fabulous food with wine, soft drinks and coffee was less than €10 per person.

The local transport consists of one quad bike for security and Cruz Roja cycles for medical emergencies! We just loved the laid back feel to this island that time has forgotten, thanks to Oscar a daily excursion is now available from Lanzarote. Oscar from Rubicón Fishing has fantastic English and is happy to either accompany clients around the island or wait for you to return at the end of your day exploring – you are the boss!

The boat is an 11 metre rib with twin engines which has a capability of 42 knots, passengers sit on the tubes or stand behind the console both of which are very comfortable for this short journey.