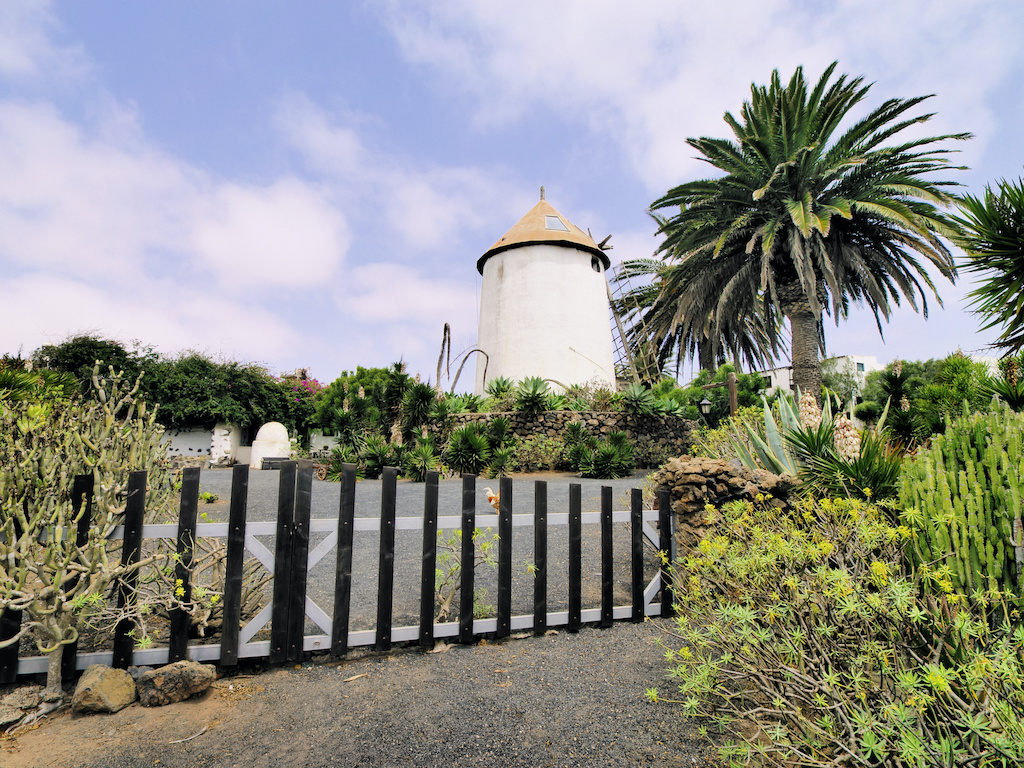 The Museo Agrícola El Patio is situated in the village of Tiagua in the central area of Lanzarote.

El Patio dates back to 1840 and is the oldest and largest farm in existence on the island, the land is still worked today to produce traditional crops. It began life when a group of poor farmers without their own land approached the Marqués de la Quina Roja (Don Francisco de Ponte) for help and began to cultivate the previously untouched landscape.

The farmers cultivated tobacco from 1845, apparently this crop was plentiful and of exquisite quality, the tobacco would be dried then transported to a plant in Tenerife where the cigars were made and packaged. There wasn’t any reference to this crop at the museum other than the photos of the workers smoking pipes.

It’s difficult to find more information from around this time, during a search online I came across an interview with Antonio Tejera Cabrera (1935) on the Memoria de Lanzarote website who talked about his life as a farmer in the municipality of Tinajo. They used to grow crops of barley, wheat, lentils, peas and corn to survive by living off the land. With tobacco he explains, it was different because you had to work all year cultivating the crop, it was something that you couldn’t eat and we got money from the sale at the end of the year. Antonio said that they stopped cultivating tobacco first because a cheaper variety was grown and then complaints were made about the quality, because the crop is sticky and sand would stick to it when the tobacco was drying. When the tobacco trade ceased people started growing watermelons, onions and garlic.

El Patio offers an interesting insight into traditional Canarian culture, you can step back in time in the Casa del Campesino (country house) to witness how locals lived. We found the Canarian still life characters a bit spooky in this building so beware for a turnip head staring back at you when you glance around the corner! The house is a perfect example of a dwelling of a farm worker in the 1940’s with the courtyard including a water filter, kitchen, bedroom and living room. The farm manager lived here until 1949, he was in charge of 20 workers and 15 camels and the farm was the best developed on the island at that time.

Notary José Hernández Arata sold the farm to the Barreto family in 1975. The museum was created by chance in 1980 when Dr.José María Barreto Feo restored a room within the house to display a photographic exhibition of volcanoes. His children José María and Germán opened the farm to the public in the mid 90’s as the Museo Agricola El Patio.

There are 15 places of interest marked on the map issued to visitors on arrival, the receptionist explained its best to start with the house.

The Museo Agrícola El Patio is a private museum and dedicated to the history of agriculture in Lanzarote, there are many artefacts to see and notice boards to read as well as some beautiful examples of Canarian architecture. Visitors to the museum can sample and buy the Lanzarote wines produced on their land which are only available to buy from this location.

The museum can be found on Calle Echeyde in Tiagua just off the main road from San Bartolomé to Tinajo, at the crossroads for Mancha Blanca, follow for Tiagua and the Museo Agrícola El Patio is signposted in a short distance on the right.

We’d recommend hiring a car to get to and from El Patio – information here: Lanzarote Car Hire.