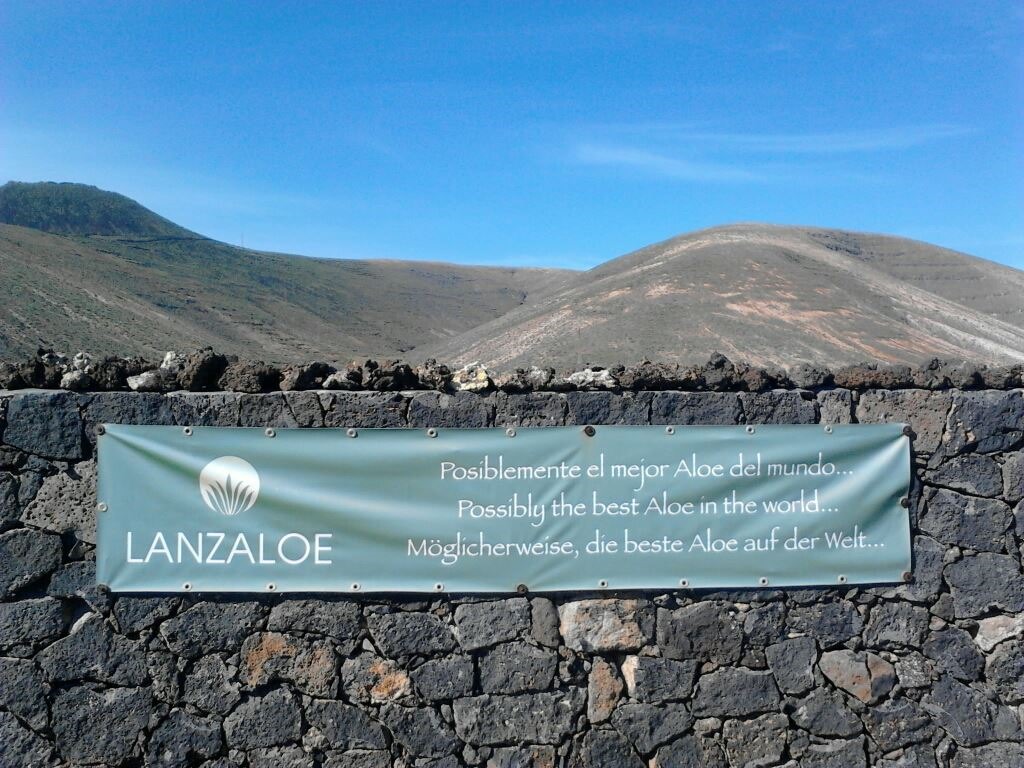 I have seen seen the sign for the Lanzaloe –   “Finca Ecológica Aloe Vera” pink sign on my way to Órzola’s harbour a few times and I kept thinking: “mmm, I wonder how far that is. I should check it out sometime”.

Well, it turns out it’s not very far at all. As you hit the T-junction entering the village of Órzola, coming from Arrieta on the LZ-1, you turn left into the LZ-204 for about a kilometer, heading in the opposite direction from the harbour, you can’t miss it. It’s approximately 15Km following this coast route.  You can also make it from Haría heading towards Mirador del Río and then passing through Yé which is about 17Km or from Arrieta but inland, taking the LZ-201, which is around 10Km.

The visit to Lanzaloe’s plantation is free of charge and you can turn up any time from Monday to Saturday from 10:30 to 17:00h without having to make a booking. A friendly multilingual tour guide welcomed us as soon as we got off the car and asked us if wanted to visit the plantation first or sample the also free homemade cake and Aloe Vera liqueur.

We choose to wander first, which we were allowed to do freely for as long as we wanted to. Initially that surprised me, but we didn’t feel unattended because big sign between the car park that points out the different areas of the plantation. There is also several pillars with a book with explanations in Spanish, English and German so people can read a bit more details if they choose to do so.

The picón trail goes through the fields of Aloe Vera plants, all lined up in rows that create a very geometrical pattern which is topped up with sea views.

The GR131 route from Órzola to Playa Blanca actually passes through the plantation, as we could see from several posts distributed through its gentle hills and banks.

There is also a covered picnic area between the car park and the shop, so people can sit and relax a bit after the gentle trek through the plants if they wish to do so.

Upon return to the original point, the car park, the friendly tour guide greeted us again as she enquired about our little expedition as she ushered us into the shop.  As we told her that we were already familiar with Aloe Vera, she “only” gave us a quick explanation on the plants natural properties and it’s many applications when mixed with other natural ingredients. I suspect it would have been more extensive if we had been Aloe Vera” “virgins”. She kindly answered any questions and doubts that we had about the plantation or the products they manufacture. I didn’t feel rushed in any way or pressured to buy anything which certainly makes a difference.

The bravest of our small party of four even tried a small bit sized piece of the gel, which she had cut there and then. It’s very bitter and it has the consistency of jelly, a bit more “meaty” perhaps. My advise, try the gel first and down the shot of liqueur and / or the cake afterwards to wash off the peculiar taste afterwards!  The cake is only about half an square inch, mind you. The liqueur is which served in a small shot glass is quite sweet. We were offered second helpings of both, though.

Lanzaloe has 6 hectares of plantation that they harvest on a weekly basis and it’s one of the biggest organic and traditionally cultivated Aloe Vera plantations in the Canary Islands, and the only one in Lanzarote that both grows and transforms the plant on the island, we were told.

The plantation has also some fig trees and they are growing a small olive grove and some Argan trees which are also ingredients of some of their products. This is at the moment on an experimental phase. The plantation has a solar power system installed and as you can appreciate from the olive grove photo, a small wind turbine. So we are happy to see that not only they are ecological, but environmentally friendly.

Their processing plant is in Playa Honda, opposite the airport and it can be visited too, free of charge, but by appointment only. There they manufacture a wide range of beauty and health products that can be bought in their own shop at the plantation, or at a shop for cruises only in the harbour in Arrecife, online and in selected perfume shops and pharmacies. Lanzaloe do not have their own chain of shops, shall I say, unfortunately.

You can now order Lanzaloe products online from Amazon to be delivered to your home:

Abbeylara is a well established holiday home from home including a private pool, within 5 minutes walk of the beaches and town of Costa Teguise, Lanzarote.