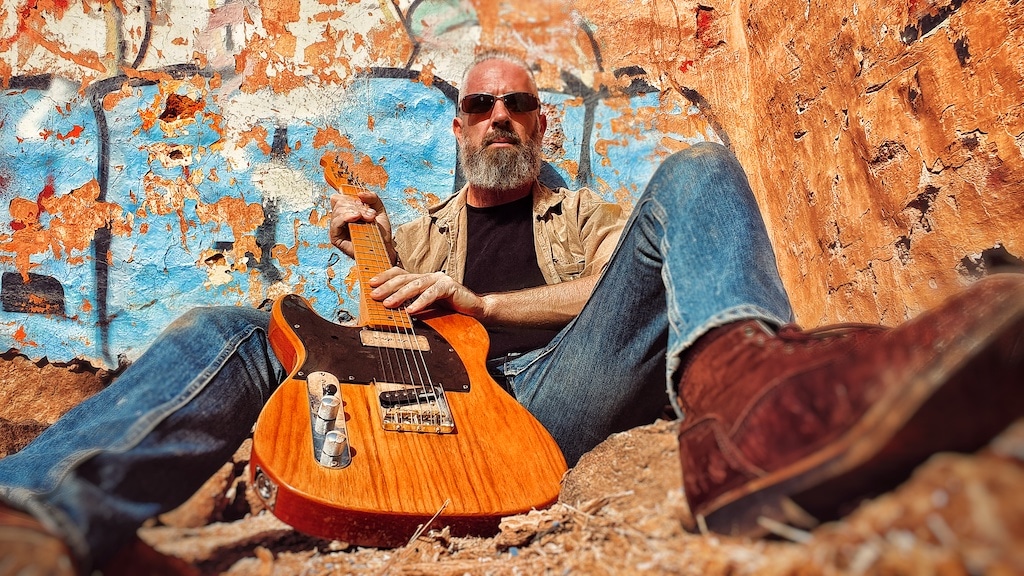 Pete Tilbury-Fowler is one of those musicians who for some reason I started seeing their names pop up right, left and center. It specially intrigued me to see that he seems to be in different bands… I had to found out more:

Where are you from originally, Pete?
I was born in London and grew up around Oxford. After Uni in Aberystwyth I spent a year in California, then came back and did the 9-5 thing. Met my wife Jodie and moved up to Northamptonshire. We came here from there.

How long have you lived in Lanzarote?
We arrived in November 2014 so just over 6 years now.

What brought you here in the first place?
Jodie’s family had been holidaying here for years and her parents moved out in around 2011. Her father passed away here in 2014 which prompted us to finally make the move out. We put the house up for sale and said we’d come out “if it sells”. It sold in 4 weeks and before we knew it we were on a plane!

Wow, that was fast! What do you like about the island?
So much! Our biggest worry when we moved was that we would do everything there was to be done on such a small island and then get bored – but the longer we’re here and the more people we meet, the more things we find to get involved in. It feels like we haven’t really scratched the surface yet! People are friendly, obviously the weather is great, and for me it’s been a chance to turn my hobby into a profession and become a full-time musician.

What is your favourite place in Lanzarote?
We live in Haría. Just above the “pueblo” is the “Mirador de Haría” which overlooks Famara and down to Teguise, as well as out across the ocean. It’s a breathtaking view and I could happily just sit there for hours.

I can picture it in my head. Beautiful spot indeed! Tell us, what do you play and / or sing?
I’m a guitarist and singer in various guises. I started working here as a solo performer and joined several projects before settling on my current gigs. Right now (well, when the world isn’t coming to an end!) I play guitar and sing with the Band of Gypsies trio at Decades in Costa Teguise, and I’m the sheriff, compere and part of the house band The Texas Bandits at Rancho Texas’ Country & Western Nights. Two very different gigs! The Gypsies play a mix of rock, blues and soul, covering everything from Bill Withers to Lynyrd Skynyrd and Jimi Hendrix to Blink 182, whilst the Bandits are all about Country! From time to time, I still do some music with my wife Jodie under the banner of Calisto – we’re an acoustic duo featuring guitar, vocals and piano.

Very different styles indeed! Who is your idol?
Hard to pick a single hero! I first picked up a guitar at age 8 after listening to Lindsey Buckingham on Fleetwood Mac’s Rumours album. Eric Clapton is an obvious hero for many guitarists, and I’m heavily influenced by blues players like Gary Moore and Joe Bonamassa.

How would you describe your gigs and your music for someone who’s never heard you before?
I was once described by an audience member as a musician who’s also “a little bit sort of like a kind of comedian”. I think it was a compliment! I put a lot of energy into performing, but between songs I like to have a giggle with the crowd. A typical Gypsies show is pretty full on, and the Bandits are part of a great cabaret night out.

You have already told us about your pre-Pandemic gigs. Do you get recognised on the street?
I get recognized from Rancho a lot. We play to around 20,000 people a year, so tourists will often come up and say hi. The kids are always a bit confused that I’m not wearing a Stetson and carrying a pistol when they see me in HiperDino!

Hahaha, I bet they are a bit puzzled, alright! Are you doing online gigs at the moment?
I’m a bit of a technophobe, so I haven’t tried my hand at online gigs. Also, banter with the audience is a big part of the fun of performing for me and playing to my phone just wouldn’t be the same!

Well, I have seen some of your videos and you are doing pretty well, technology-wise. But I get what you say about it not being the same… Do you have any special projects coming up?
I’ve been getting involved in some really fun projects during lockdown. Most recently I’ve been co-writing an album on the subject of climate change that’s taken my musical tastes in some great new directions!

Sounds very interesting. How can our readers keep up to date with this and future project and gigs?
When it opens, the Texas Bandits will be back to playing at Rancho Texas every Tuesday and Friday night, plus Saturdays over the summer.
Band of Gypsies post all our gigs via Facebook @bandofgypsieslanzarote.
Calisto events and links to recordings and videos on Facebook @calistouk.

Tell us something your fans/followers might not know about you (yet!)
I’m obsessed with motorbikes! I used to ride in the UK come rain or snow, but now I like to go off-road riding around Lanzarote with friends. You haven’t lived until you’ve ridden over a volcano on 2 wheels!

That must be some rush indeed! To finish up, anything else you’d like to tell our readers?
I’m the luckiest man on earth! I live on this incredible island and get to spend my days and nights indulging in the hobby I’ve loved for over 40 years. It’s introduced me to some amazing people and I can’t wait to get back to entertaining once “normal” returns!

Thank you very much indeed for your time, Pete, and hopefully see you perform live sometime soon!