How To Cook An Octopus 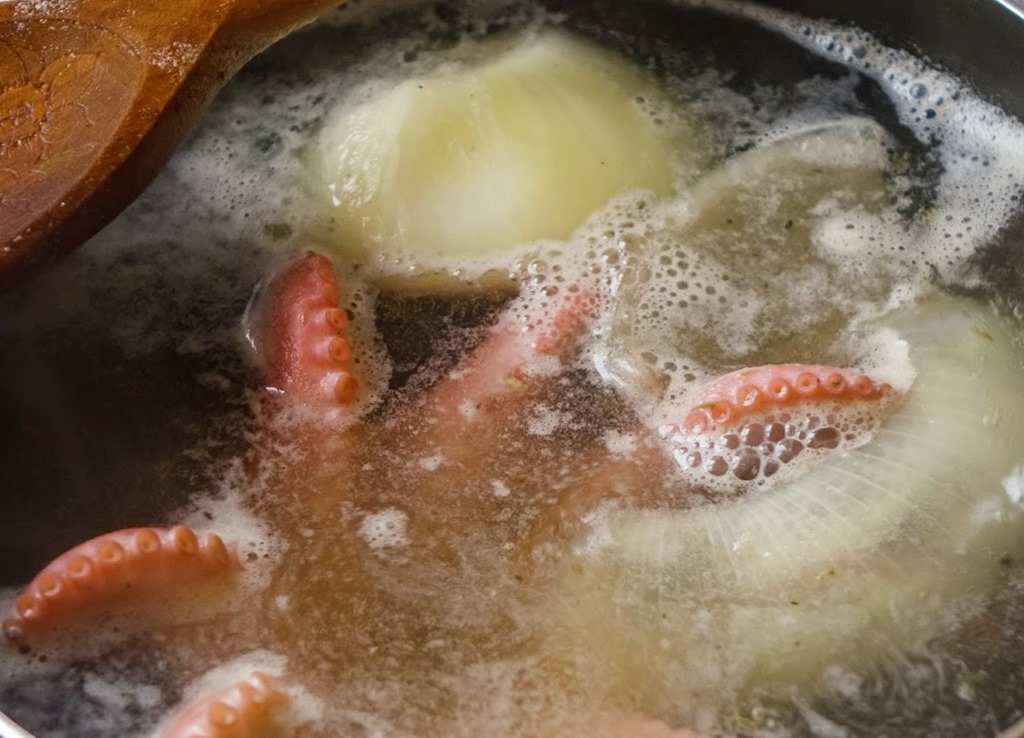 Octopus, or pulpo as its known locally, is a key ingredient of many dishes and is delicious hot or cold.

They are readily available on the island from fishmongers and also frozen from supermarkets.

Slice off the octopus’ head, so that you end up with what looks like an eight legged starfish – all the taste is in those legs.

Next, you’ll need to remove the beak – you’ll find this in the dead centre – simply run a very sharp knife around it and push the beak through until it pops out.

Bring a large pan of water to the boil, add salt, a couple of bay leaves an onion cut in half and a wine cork. The cork is supposed to prevent the octopus from getting tough. I’ve never cooked one without a cork, and I’ve never had a tough one! I’ve no idea what kind of voodoo is at play here, but just do it!

Dunk the octopus into the boiling water three times, counting 20 between each dunk. This will curl the legs and seal the outside.

Once the water is back up to the boil drop the whole octopus in and reduce the heat until you have a simmer. Poach for between 30 and 40 minutes, depending on how large the octopus is.

Put on a plate and allow to cool.

Once the octopus is cool, you need to remove the skin on the underside of the legs – this is easy to do, just rub it with some kitchen paper and it will come off.

What you do next is up to you – there are dozens of ways to serve octopus, here are a few of our favourites:

Sliced into a salad and served cold.

Slice the legs into thin slices at the thick part, leaving longer sections at the end of the legs. We serve it with a prawn, lettuce and green pepper salad dressed with olive oil and vinegar.

Again we slice the octopus as above and arrange it on a plate. Heat some non virgin olive oil to hot, but not smoking, then add two teaspoons of smoked paprika and half a teaspoon of chilli powder. Stir and pour over the sliced octopus and serve with fresh bread.

We keep the legs whole, drizzle with non virgin olive oil, dust with smoked paprika, and sear them on a very hot barbecue.