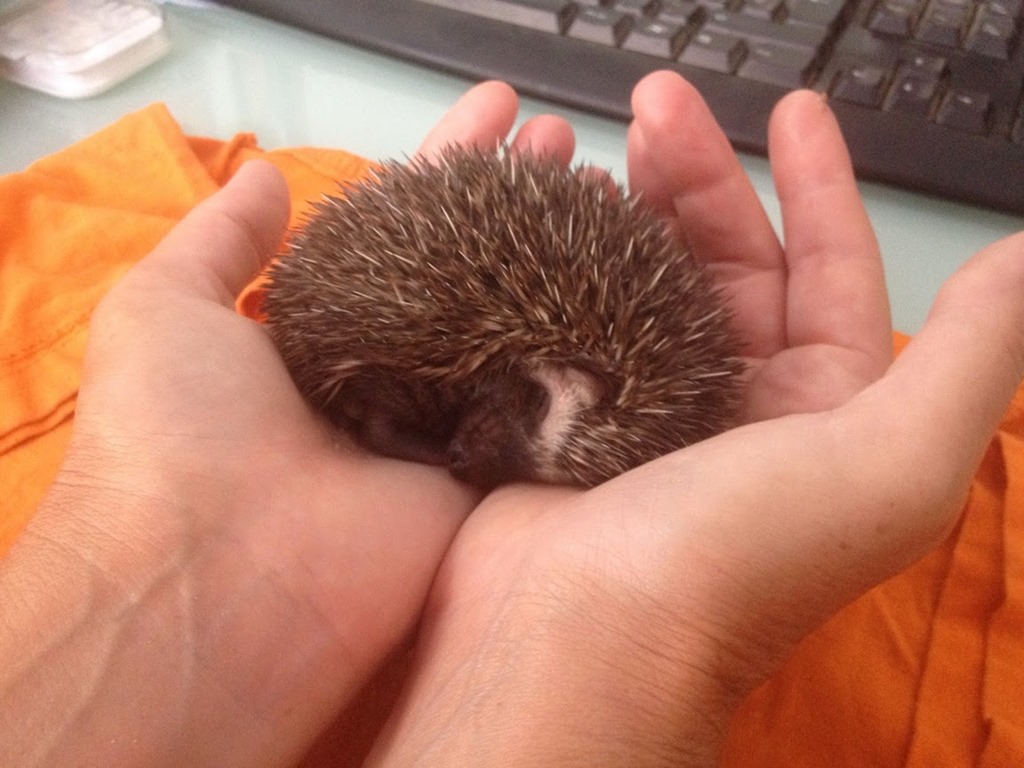 I was out in our garden one morning in July watching the sunrise when my attention was drawn to something squeaking. On closer inspection I found it was a tiny hedgehog who had clearly lost it’s mum as they shouldn’t be out in the open during daylight.

After observing the hedgehog for a while it was just rocking back and too, squeaking in the picón,so  I wrapped a towel around it and brought it inside. I didn’t have a clue what to do next! Unlike the UK, there’s no hedgehog rescue centres in Lanzarote, so I put the baby in a cardboard box with a towel whilst I carried out some research on the internet.

It was not good news, hoglets are hard to rear. This little mite was obviously hungry and distressed, still emitting pitiful squeaks I read that the rescue centres in the UK give them puppy formula, goat’s milk was also mentioned as a short term solution. I thought finding a goat’s milk source locally would be easy, but after asking in the village, short of trekking up to one of the goat farms there was none for sale that day, it could only be ordered in for tomorrow. I drove down to our local vets where to my surprise they had a tin of the formula recommended in the UK – Royal Canin Babydog milk.

Despite my best efforts on day one, I could not get the hedgehog to drink the milk, it just ignored it, walking through the dish, taking no interest.  By day two I was really worried, somehow I had to get food into the baby who was deteriorating. There was another problem, it hadn’t been to the toilet, normally the mother persuades the young babies to go by licking them, this can be replicated by using a wet cotton bud, I hoped that once drinking this problem would be solved.

Time was running out, I decided to get hands on. The hoglet wouldn’t feed direct from a syringe but after a bit of experimenting, I discovered he/she would lap hot milk out of my hand. I weighed the hedgehog, at 123g I estimated it was 3-4 weeks old. Finally the hoglet settled, by day three we had a routine, it would lap fairly hot milk out of my hand then snuggle up in my hand or t-shirt for a snooze, we were beginning to understand each other.

On day four the baby hedgehog was much more perky, still very wobbly on his legs, but toileting and occasionally grooming itself.

Over the next ten days we continued the milk feeding and gave the hedgehog more space for exercise which gave me a chance to observe his habits, he had also progressed to drink the warm milk direct out of glass jar tops now, rather than my hand.  When food arrived, he could be heard sniffing and licking, his way around the den, the full 20ml dish would be consumed greedily. After eating the hoglet would wander around to toilet and then snuggle back under a towel to go back to sleep.

I’d been leaving mashed up cat food in a lid along with the milk but this had been ignored even when mixed with milk. Then suddenly two weeks after his rescue he started eating the meat and within a few days hoglet preferred the meat, eating that first then drinking the milk.

Hoglet was developing, his nose had changed shape, he sprouted ears and his face became furry, his spines rather than tickling were hardening up and left a slight irritation on my skin after handling. We were also hearing some different noises, he started to emit a squeak when picked up and purred almost like a cat when content. If I put my hand flat, hoglet would come over and stand on it for a cuddle, he liked the soft fur on his belly being stroked.

It was time for a weigh in, Hoglet had almost doubled in weight and was now a whopping 325g.

It was almost time for hoglet to be returned to the wild, we built a hedgehog house for the garden but blocked the tunnel for a few days, so that hoglet could realise this was a safe place with food. Then it was time for his release, we waited until dark and placed food in the house, uncovering the tunnel at the same time. Hoglet came for a sniff and stroke, then made way down the tunnel to the garden, after a quick snuffle around, he went back in to eat the food before venturing out again. We left at that point and waited until morning to see if hoglet had returned to sleep in the house.

The next day I was initially disappointed that hoglet wasn’t curled up sleeping in the house, we’ve left food and water each night for a week since but there’s been no sign of him. Part of me is sad that he didn’t hang around but I’m also happy because it meant that I’ve raised a healthy, strong and independent hedgehog who is living back out in the countryside where he belongs.

Casa Margarita is a lovely rural retreat with private swimming pool, close to Famara and Tinajo.