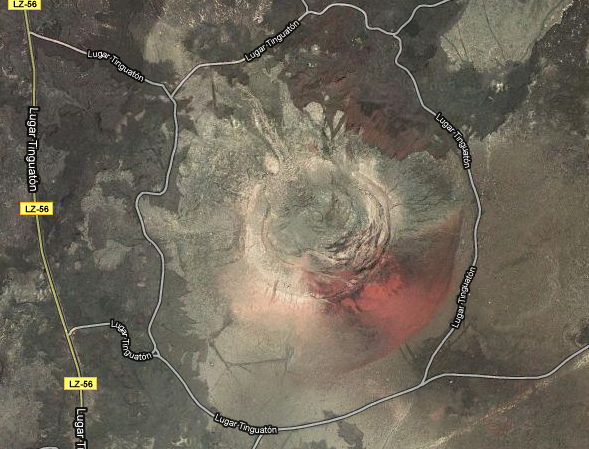 La Bomba is a stunning place and worthy of a visit even if you don’t enjoy walking!

Montaña Colorada is the bright red mountain that you can see from the LZ-30 road which passes through La Geria. To access the parking area, turn onto the LZ-56 towards Tinguaton and the Timanfaya National Park, look for the dirt track turn off on your right as you approach the base of the corona.

We were here to find the geocache called La Bomba, it was planted back in January 2007 and has been found by 518 people since.

There is an official walk here which is one of the Sendero de Lava (lava paths), the Montaña Colorada walk is 4km long, a circular route around the base of the volcano with 15 different information points. Montaña Colorado was formed in the later stages of the 1730 t0 1736 eruptions and the volcano is 100m high. We followed the path around to the right in the direction indicated, it’s less than a 10 minute walk to the phenomenon called La Bomba. Pyroclasts are rocks that are formed from the molten lava and shot up out of the erupting volcano like volcanic bombs.

We found the cache on arrival, this one was disappointingly easy. We continued our walk, the landscape here is simply stunning, there are sections where nothing is visible but volcanic landscape, no sign of modern man.

Read more about volcanoes and eruptions in Lanzarote.