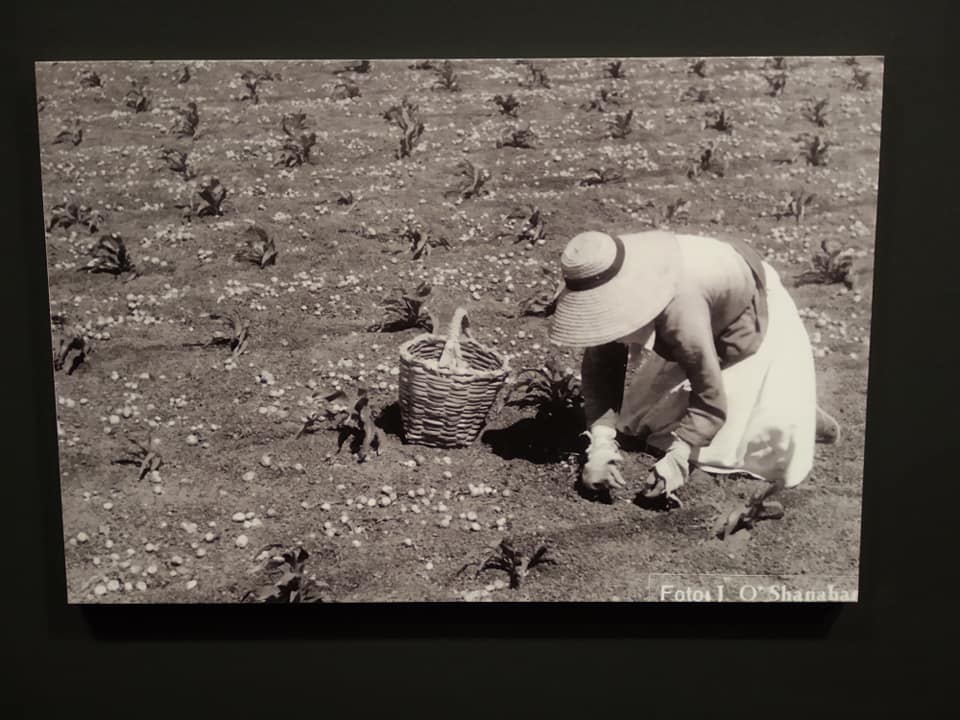 I went to see this incredibly well set up exhibition, which is a tribute to the rural and coastal women of Lanzarote, just before the Lockdown so there was little point in telling you about it then. Luckily the exhibition reopened on the 22nd of June. There is no end date at the moment but it’s expected to be on for a few months. A protocol to prevent the transmission of Covid-19 has been put in place.

“Sombrera” is basically the hat traditionally used in Lanzarote by women to prospect them from the sun but it also casts a shadow on their face, hiding their identity.

This exhibition combines an informative side with an artistic one, its goal is to make visible and give value to the role of women in Lanzarote’s society. A role that was often anonymous but essential for the survival in such a hostile island with strong hours of sunshine, constant wind and lack of water.

To start with, the female role started in childhood when girls were prepared to become wives and mothers. This life aim was not restricted to the house chores but also many rural women carried out trades generally considered female: such as midwives, healers, washerwomen and maids.

They also were in charge of making the most of the natural materials available to make the required objects for everyday life like: pottery pieces, baskets, looms or the famous “rosetas” (Canarian doilies), dresses. Even if the financial compensation was scarce and often replaced by a barter system, these contributions were fundamental to supplement the precarious family economy. It’s very interesting to see that they were jobs particularly typical of the island, due to its natural resources, throughout history like cochineal collectors, fish factory and salt pans workers.

Finally, the image of the woman in art, touristic publicity and literature is analised as these areas are valuable sources of information and contribute to the public imagination. There are reproductions of artists such as Pancho Lasso, César Manrique, Santiago Alemán or Jane Millares; touristic postcards from the 50s on and texts by writers like Clavijo y Fajardo, Rafael Arozarena or Ángel Guerra.

This was my first visit to the “Casa Amarilla” (I know, shame on me!) so it was very interesting to go in and explore the different rooms and their sections, which was set up as a one-way system. Plenty of written information, both in Spanish and English for those who thrive in finding out more details but with loads of visual aids, layouts and many details waiting for you at every corner that you could spend ages checking out.

I was also very impressed at how nicely new technologies were used in some instances like QR codes to access more information, not to mention the clever creation of the portrait of the “Lanzarote woman” using multiple photographs as breath-taking as the one that presides the entrance of the exhibition.

From the moment you walk through the first doorway, mysteriously flanked by thick black curtains to the music and audios that follow you through the exhibition, you are transported to the olden times and what a trip it is. Even if museums are not your thing, I would almost challenge you, dare you even!, to go and see if you are not able to find something that catches your imagination.

******
“Sombrera” can be visited at the “Casa Amarilla” museum, also known as the Old Cabildo on Calle León y Castillo, number 6 in Arrecife, from Monday to Friday from 10am to 6pm and on Saturdays from 10am to 2pm. Entrance is free of charge.

This exhibition has been curated by historian Arminda Arteta and graphic designer Vanessa González. A crucial part of their work consisted in interviewing women in the island who with their testimonies have helped to configure much of the project’s content.

It also has about thirty images of great documentary an esthetic value by different photographers such as Fachico Rojas, Paco Elvira, Jaime O’Shannahan or Javier Reyes to name but a few. Many of the tools and original objects have been provided by different collectors.