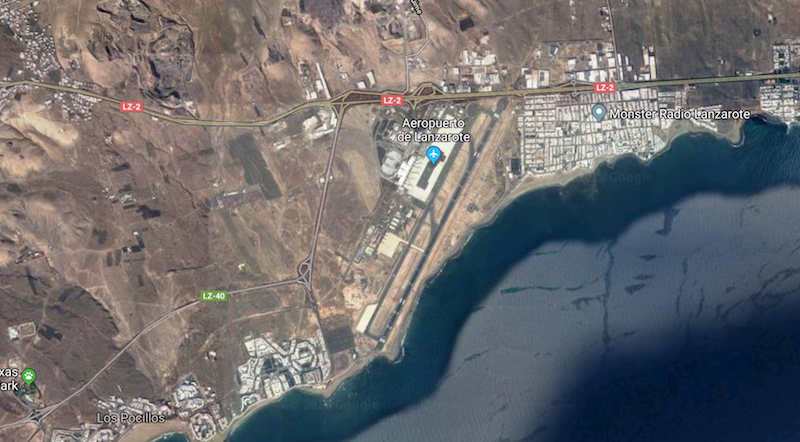 Sometimes, when the wind is wrong, aircraft landing at Lanzarote airport end up diverting to Fuerteventura.

Here’s an explanation of the set up:

There is only one runway at Lanzarote airport, and according to the wind direction, aircraft can land either from the sea (Designated 03), or over land (designated 21). Our wind is almost (!) always from the north, which is why the runway coming from the sea is generally used.

But aircraft need to be able to land and take off “into” wind, so when the wind backs to a southerly, the runway is switched so that the planes come in over land.

And now we have the problem:

The runway only has ILS (Instrument landing system) from the sea side. ILS means pilots get a visual display showing the required direction and glide slope. It can even be coupled with the automatic pilot.

Using ILS, the pilot doesn’t have to be able to see the runway to fly down to it.

But using the land approach, without ILS, pilots have to be able to make a visual approach. They must be able to actually see the runway, and depending on the aircraft type, they have to do so at a specific height. If they can’t see it, they can’t continue the approach – the rules are very clear – and they must carry out a “Missed approach” procedure, commonly called a “go around.”

The problem can be exacerbated when southerly winds, which require landings from the land side without ILS, are combined with low cloud on the final approach, making it impossible to see the runway. The pilots have no choice, they have to go around, and ultimately, divert to the nearest accessible runway, in our case Fuerteventura.

Because of the steepness and layout of the terrain on the approach to runway 21, it is not possible to install ILS. The only way to do so would be to extend the runway some considerable distance into the ocean.

Fortunately, this is pretty rare, and something we’ve always just coped with. But it can can cause some issues with passengers and aircraft displaced.

Did you know Concord had been to Lanzarote? Concord visits Lanzarote.