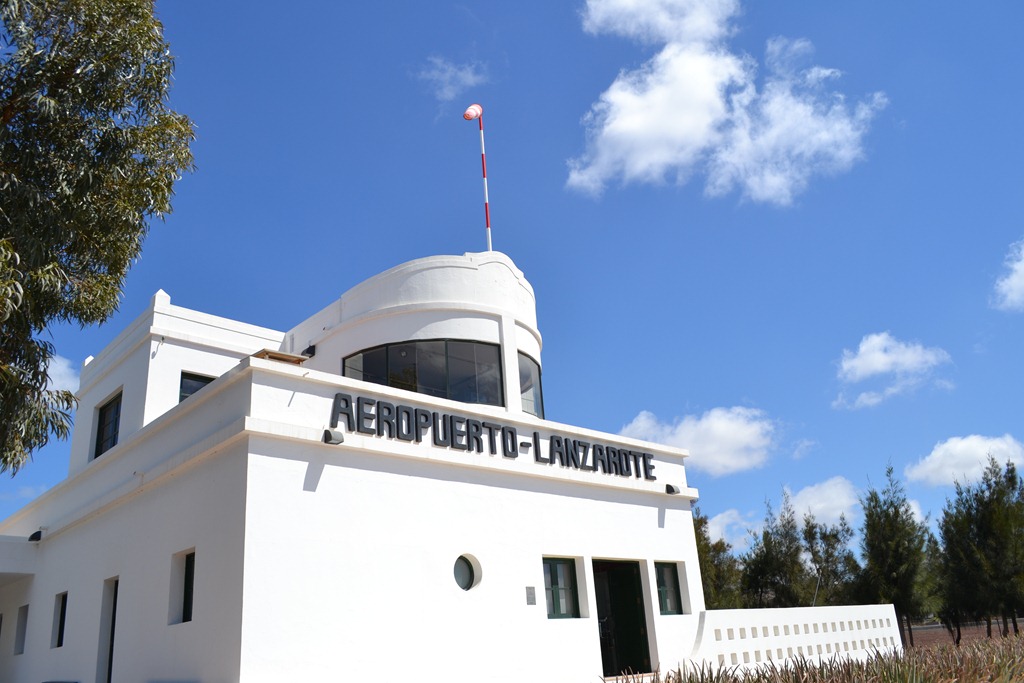 Lanzarote’s original airport building is situated within the grounds of the current airport just next to the dual carriageway into Arrecife, now home to the Museo Aeronáutico del Aeropuerto, or aeronautical museum.

This tiny building handled the passengers from 1946 to 1970 when the larger airport facility was built,  which we know now as Terminal 2.  Entrance to the aeronautical museum is free, simply give your name and nationality to the staff on reception when you arrive. There are ten rooms within the museum which have been segregated into different areas of information.

This explains the early years of aviation in the Canary Islands, the first plane to cross the skies over the Canaries was in 1913, the first airports were not built here until the 1940’s. Due to our strategic geographical location as with the ships, the islands became a stop over point for planes crossing from Europe to America. The Graf Zeppelin airship used to pass over the island dropping mail by parachute on it’s voyage to America. The first regular flights between the islands and Madrid started in 1930 with the company CLASSA operating to Gran Canaria and Tenerife.

Room 2 – The First Flights in Lanzarote

It was seaplanes that first landed in Lanzarote, the first flight was in 1919 when French pilots Henry Lefranc and James Roujand set down on Playa del Reducto in Arrecife in a GL-40 biplane. Five years later in 1924 it was a party including Ramón Franco the brother of the Spanish dictator who landed a military seaplane Dornier Wal in the harbour at Arrecife. Franco was accompanied by Captain Alejandro Más, Commander Guillermo Delgado and a photographer Leopoldo Alonso.

The old airport has an open planned design, the rooms interlinking through rounded archways. The largest room has a stunning colourful mural on the wall entitled “Lanzarote” created by César Manrique specifically for the passenger terminal in 1953. Here we watched a short old film about flying in the 1950’s following the pilot through the checks before flight, take off and landing.

The airport was opened on the 12th June in 1946, residents leaving the island would enter the building by the side door on the right hand side of the terminal, exiting to the front of the building where they would climb up the steps of the wall to board the aircraft.

Lots of memorabilia from the airport is on display including pilots log books and old machinery. There were two boards listing the years where individual photographs were pinned depicting historical images and magic moments like the visits from Concorde, the museum would be delighted to add one of your photographs to the collection if you have one to fill in the gaps.

You can take the stairs up to the control tower, remnants of the old machinery is still in situ as well as a panoramic view towards terminals 1 & 2.

There is also a library of aviation books which visitors are welcome to sit and browse.

A visit to this aeronautical museum was fascinating, we would suggest that you need an interest in the history of Lanzarote or aviation to enjoy it fully and you do need to take your time to absorb the information available. Both Johann and Coral from the museum were brilliant, we received a warm welcome and offered a guided tour if we would like one, they were also on hand to answer any questions. We learned some interesting facts such as the airport is home to 2 eagles and 9 falcons that fly three times a day to keep the air space free from migratory birds.

The terminal was replaced in 1970 when the building now known as Terminal 2 was opened to cope with the expansion into tourism. There is a photo album in the museum of the new terminal which was decorated in Lanzarote green and white with striped canvas ceiling and bright green check in desks.

The aeronautical museum is open from Monday to Saturday from 10am to 2pm.