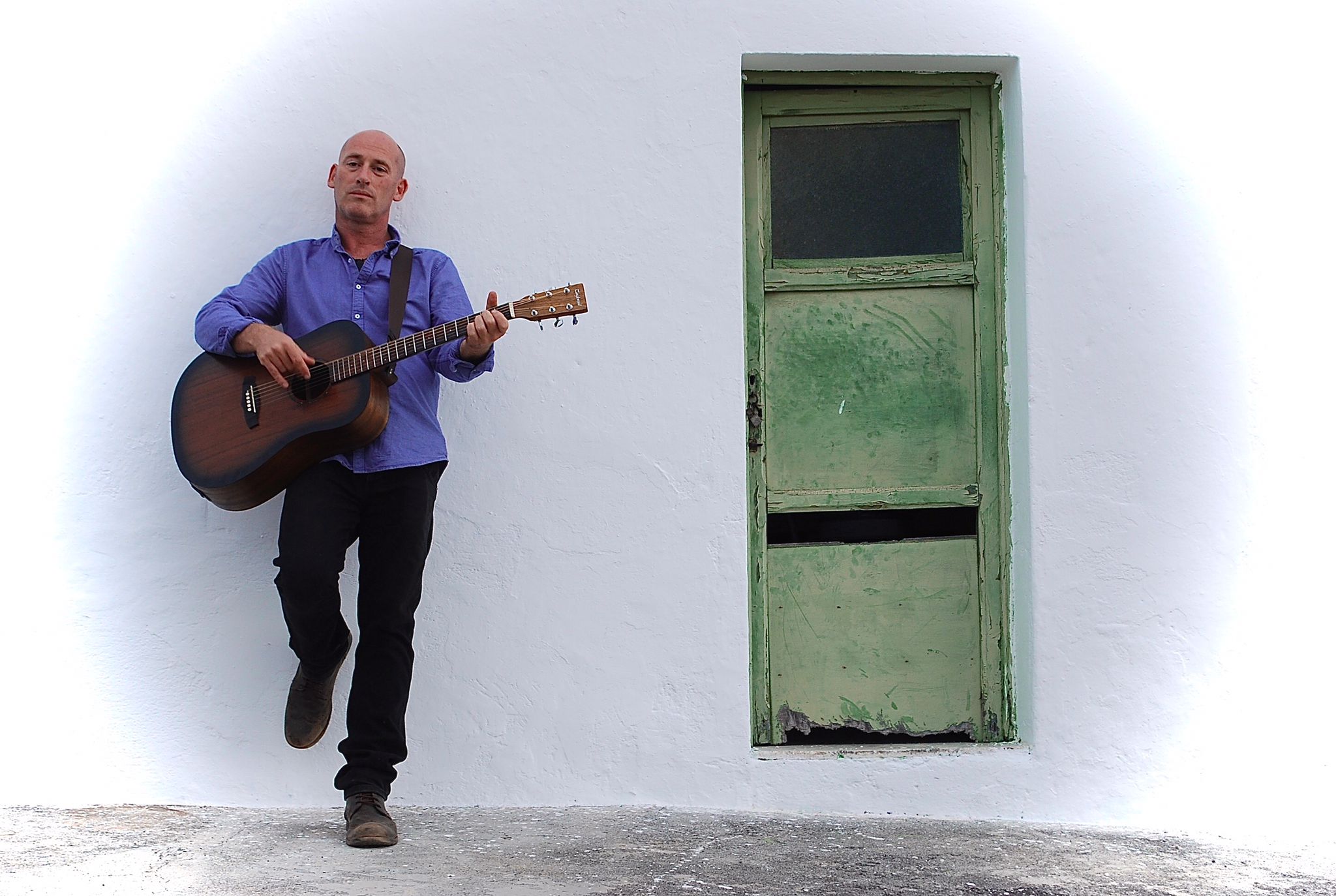 I met Dan Trayers for the first time only last month, when the Lanzarote Musicians Unite group organised their first Originals Night in the Heineken Bar in the Harbour in Puerto del Carmen. He was one of the few musicians I didn’t know until then. I was impressed by his versatility between genres, his very own style being quite gentle yet robust. Not to mention how catchy some of his tunes were. By the end of some of his songs, the crowd was already singing along to them, despite of not having heard them before! I found out that he was from very close to where I lived when I was in Ireland. So, I knew I had to find out more about him…

Hi Dan, where are you from originally?
I’m from Tuam, Co. Galway in Ireland.

How long have you lived in Lanzarote?
I moved here in 2017, so about 4 and a half years ago.

What brought you here in the first place?
My first stint in the island was when I was about 24 or 25. Overnight I got the chance to come over to play with a 3-piece band. One of the members had dropped off at the last minute so I jumped at the opportunity to come over to play in Lanzarote with a 2-month contract.

After the summer, my brother, who is also a musician, joined me from Australia where he had been living for a while. I stayed for another 20 months or so. We formed a band, Stone Lakes. Back in Ireland, we had a growing collection original of songs. The idea was to keep performing and to travel but when the recession hit, we were down to bread and butter / cover gigs. My brother eventually changed careers -he is in IT now- and moved to Canada. And here I am.

Welcome back! Tell us, what’s is your favourite place in Lanzarote?
I loved the North of the island, this year after the rain it was so green it reminded me of home. And for the best sunset, nothing beats the way to El Golfo with a flask of tea!

What do you like doing when you are not working?
I like to walk my dog Bruce on the countryside. He is an 11-year-old Jack Russell rescue from MADRA, a dog rescue & adoption association in Galway.

What do you play and / or sing?
I write songs, play the guitar and sing. I do solo acts, a duo act with a female singer Amy Knight, a duo act with Garry Giff as well, and a 3-piece reggae band who do covers of popular songs in a relaxed, reggae style. And also, I’m in an acoustic 3-piece Beatles tribute band.

You are a busy man! Who is your inspiration when writing songs?
Anything and anybody can trigger the inspiration. I could be working on an idea for 2 years and never really finish it. Other times, in 20 minutes, I’d have the song written and recorded!

How would you describe your style, when playing?
I am more into the harmony, melody than guitar riffs. I am happiest when playing solo in the corner of a restaurant or a market, people just enjoying their overall atmosphere more than playing a stage with people focused on what I’m doing.

And how did you get started in the music world, may I ask?
I actually come from a very musical background, especially on my mothers’ side. From an early age I saw that you could make a living with music. In fact, it was my father who encouraged me to combine my work in a hotel with my first gigs to give it a go.

Obviously, it did work out.
I have been lucky enough to support Irish bands and acts like Aslan, Damien Dempsey, Hothouse Flowers, The Saw Doctors, touring & travelling with them. But the ultimate goal had always been playing my music in the sun…

…which how you’ve ended up back in Lanzarote. When and where did you have regularly play here?
Before the whole pandemic I was mainly gigging in Playa Blanca but the places I used to play haven’t re-opened yet. Just before the Lockdown I bought my place in Tías so I am very centrally based now.

Do you have any special projects coming up?
Well, I’m always writing new material. Currently I am also re-recording my hit “Buenas Noches”, which made it into no. 1 in the Irish Reggae Charts. Although the song was originally released in 2012, some of its lyrics are very relevant to what we are all living through at the moment.

Interesting, can’t wait to hear the new version. By the way, how can our readers listen to your music?
They can check https://soundcloud.com/stonelakes.

And to keep up to date with any of your musical news?
They can check my Facebook page: https://www.facebook.com/daniel.gerard.127201.

Tell us something your fans / followers might not know about you (yet!)
Well, I am actually quite keen on fishing, I barely go anywhere without my flask of tea in one hand and a fishing rod in the other.

Oh, another one is that I’m related to Danny DeVito. (Editor: This needs a follow up question! We need to more about this story.) 🙂

There you go, that is some claim to fame! Thank you very much for your time, Dan, and keep writing songs – we look forward to hearing them.