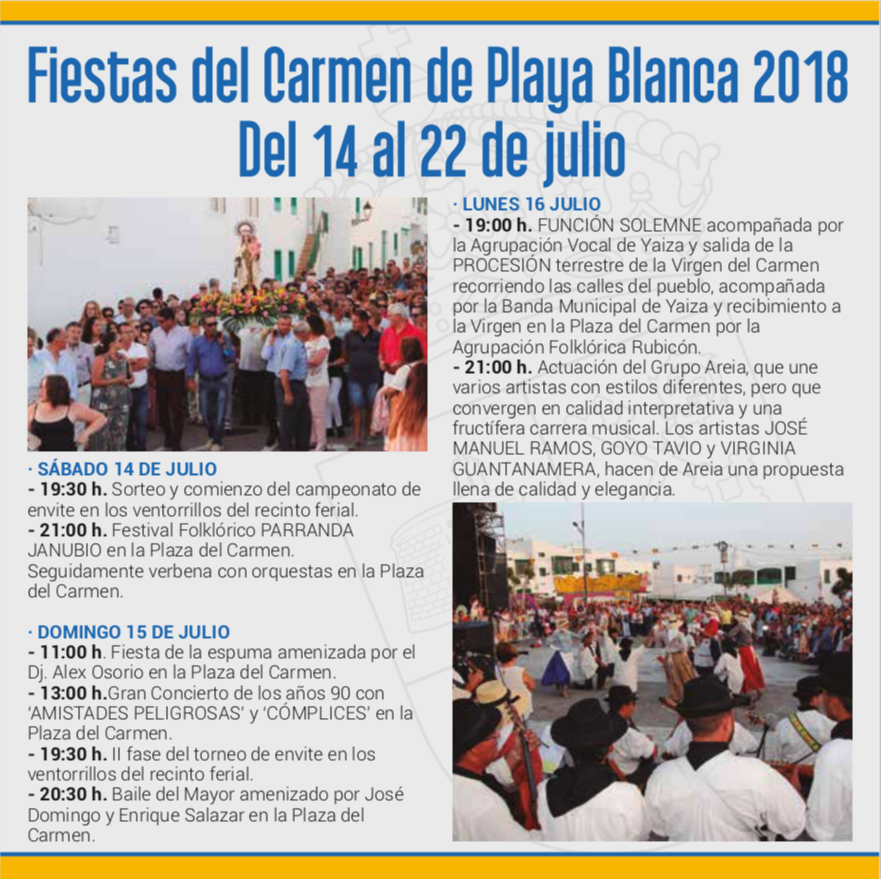 The Virgin of Carmen, which gives the name to the Festivities, the patron saint of sailors and given the fishing roots of some of the villages in Lanzarote, it’s not surprising that “Fiestas del Carmen” are celebrated in different coastal towns in the island including, of course, Playa Blanca.

The church in Playa Blanca is also dedicated to Our Lady of Carmen. The actual official Saints Day is the 16th July and the “Fiestas” are celebrated around that date. The events combines religious traditions, like the land-based procession and the much anticipated and flamboyant maritime processions, and more modern activities such as concerts, both folkloric and modern, children’s activities and sports.

SATURDAY 14TH JULY
19:30 Draw and start of the “envite” tournament in the stands of the “Recinto Ferial” (Fair Grounds).
21:00 Folkloric Festival with “Parranda Janubio” in Plaza del Carmen, followed by the “verbena” (party) with orchestras.

MONDAY 16TH JULY
19:00 Solemn Ceremony accompanied by the Yaiza Vocal Group and departure of the land-based procession of the Virgen of Carmen through the streets of the town, accompanied by Yaiza’s Municipal Band and reception of the Virgen in Plaza del Carmen by the Folkoric Band “Rubicón”.
21:00 Performance of the band “Areia” formed by artists with different styles, such as José Manuel Ramos, Goyo Tavio an Virginia Guantanamera”, that come together with an elegant proposal of quality.

TUESDAY 17TH JULY
18:00 Children’s Party with games, pace-painting and baloon animals in Plaza del Carmen.
20:00 Magic Show with Joseì Aìngel and performance of the Association “Creciendo Yaiza” in Plaza del Carmen.
19.00 Draw and start of the “chinchón” tournament at the stands of the “Recinto Ferial” (Fair Grounds).
20:00 3rd phase of the “envite” tournament.

WEDNESDAY 18TH JULY
18:30 Desserts Contest with prizes for the three best ones. (Note: desserts must be delivered 30 minutes before at “La Aurora”).
19:30 Draw and start of the “ronda” tournament at the stands of the “Recinto Ferial” (Fair Grounds).
21:30 Performae of Yaiza’s Elderlies Play Back in Plaza del Carmen.

FRIDAY 20TH JULY
18:00 Children’s Cinema with pop corn at “La Aurora”
19:30 Summer Zumba Master Class in Plaza del Carmen.
21:30 Star of the “Noche Joven” presented by Alci Rivero from Happy F.M., with the performance of Ballet Dance Pop,local DJs Pedro Morales and Izan Fernaìndez, Elvis and from Madrid DJ José Delasheras, one of the most powerful DJs of urban music currently. And from Barcelona, Adrián Rodríguez, singer, multifaceted artist and contestant of “Supervivientes”that will present his new single.

NB. The Ayuntamiento de Yaiza has published the above programme details for July 2018.