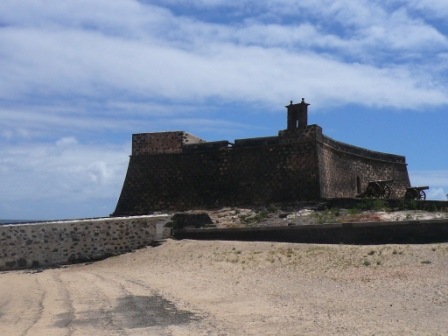 Arrecife has two castles, Castillo San Gabriel is the one situated right in the centre of town on the end of the main shopping street Leon y Castillo. The castle was originally a wooden fortress, built in 1573 to defend Arrecife from pirates and attacks from North Africa, unfortunately it was destroyed by fire a few years later by the pirate – Morato Arráez.

Felipe II awarded the project to rebuild Castillo San Gabriel to an Italian engineer, Leonardo Torriani, who selected the honey coloured stone and added the Puente de las Bolas drawbridge to the castillo. The drawbridge is the only one of its kind in the Canary Islands, its name means Ball Bridge, there is a cannonball on the top of each pillar.

The castle has undergone major restoration works over the years, it is a striking landmark in Arrecife and worth taking time out from your trip to the capital to walk out to the tiny island called Islote de los Ingleses. Entrance is free and at the moment there is a spectacular black and white photo display of Lanzaroteños in traditional clothing fishing and working, living their every day life.

Next time you visit Arrecife, make sure you take a walk along the waterfront and out to the castle, its fascinating and a great view of the capital.

Visiting Arrecife For The First Time

Casa Volcan is a stunning split level villa which has been decorated to a high standard with hand picked furniture from around the globe.