We Looked Back, Now Looking Ahead 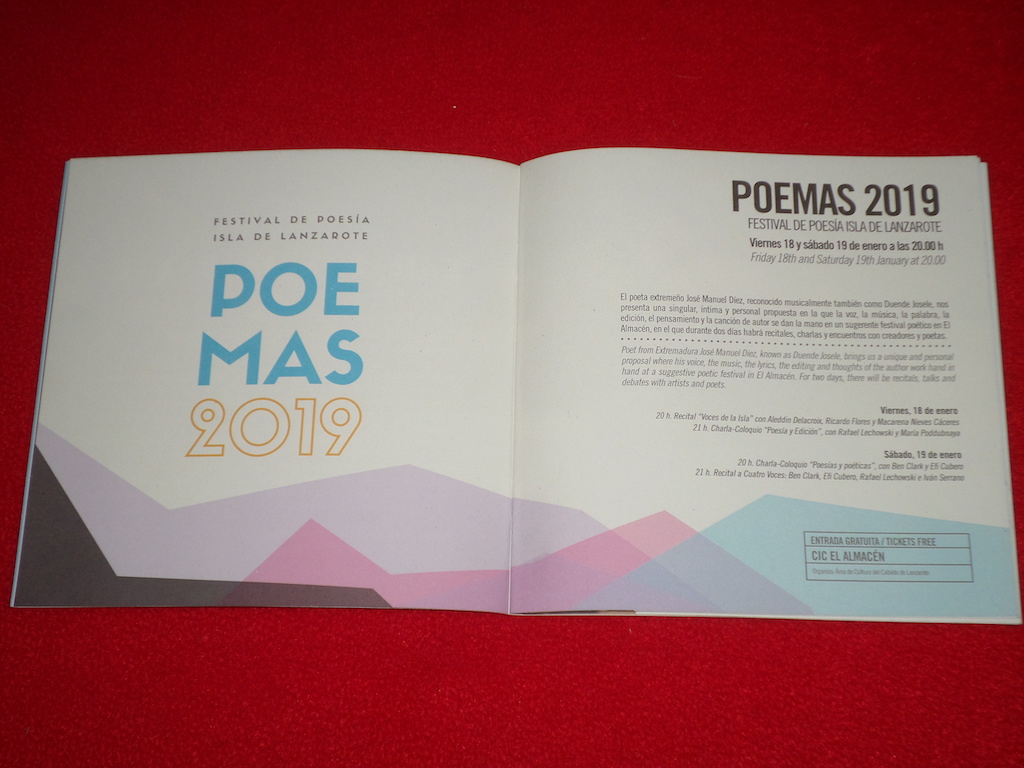 You are aware, no doubt, that Miguel lists all the events we get to know about in the what’s on section on the Lanzarote Information web site, which can also be reached via a hyperlink from HIS weekly newsletters. The information given to Miguel is usually more reliable than the news about the arts I pick up in mere conversation so it is always worth checking out his what’s on entries, and you can always verify the information on these pages through Tourist Information Offices or via your computer search engine. Pre-event publicity of arts on the island, though, is often published late in the day, so keep your eyes and ears open. Invariably, though, these events reward the bit of extra effort you might have to take to seek them out. However, because pre-event publicity doesn’t always reach us in time for publication, I am happy whenever readers we might have who know artists or who have news of forthcoming events decide to drop an e mail to me at normanwarwick22@yahoo.com

Fot instance I have recently learned that The Festival de Poesia is being held in the Cic El Almacen in Arrecife on 18th and 19th January. In  what sounds an intriguing event, poet Jose Manuel Diez, also known as Duende Josele, will facilitate unique blends of poetry, lyric, and music, ´illustrating artistic perceptions´. Throughout the two day event there will be recitals, discussions and workshops with the participation of several professional artists and poets. Highlights of Poemas 2019 will be a recital, on Friday 18th at 8.00 pm, of Voces de la Isla by Aleddin Delacroix with Ricardo Flores and Macarena Nieves Caceres, to be immediately followed by a poetry based event at 9.00 pm. This format will then be adapted slightly on the Saturday evening of 19th January at the same times with the concerts then to address different subject matter. All this for free admission!

There will also be an interesting contemporary visual arts exhibition by Raquel Plans at Cic El Amacen, officially opening on 30th January at 8,30 pm and running through until 23rd March. By incorporating small sculptures, illustrations sketches and ‘micro-stories’ the artist will address the notion of ‘falling’, and whatever that word means to us as individuals. Admission is free.

The performance arts will be well represented throughout the coming year, beginning with a production by Compana Roberto Garcia De Mesa of Outside. This work is written by the author after whom the stage company is named and is a ‘daring and convincing’ play, presenting brief sketches in different formats. Actresses Ana Reig, Irene Alvarez and Lioba Hererra will seek to confront us with our deepest emotions about issues such as National flags and borders, and fears and prejudices. This challenging but entertaining work is to be staged on Thursday 24th January at 8.30 pm at Teatro Victor Fernandez Gopar ‘El Salinero’ in Arrecife, and admission is only ten euros.

The comedic social commentator Kike Pereza then appears at El Salinero on Friday, January 25th. He feels he has spent so long looking back that it has become time to look forward. He seeks, in his inimitable fashion, to come to terms with his fears of fatherhood and responsibility and tries to resolve some of the many doubts he has (for all of us) about the uncertain future. Tickets for this event, entitled Mira Pa’Lante, are 15 euros.

The Classical Music Festival each year delivers a programme of showcase concerts across The Canary Islands, and from January to March 2019 we hope to bring you selected reviews of some of the Lanzarote events. In the meantime we can point out to you the various concerts in the forthcoming 35th Annual Canary Islands Festival of Classical Music due to begin this month. This annual Festival is assembled by the government of The Canary Islands through its ministry for Tourism, Culture And Sport and the company Canary Culture In Red, under the direction of Jorge Pellett. Performances will take place in a number of venues on Lanzarote and La Graciosa.

After only recently being awarded The National Music Award for 2018, Cuarteto Quiroga are highly likely to provide one of the highlights of the event. These musicians will open the Festival before appearing in the church of San Roque in Tinajo on 20th January at 8-30 pm.

Considered to be leading players amongst what critics are hailing as a ‘golden  generation,’ the orchestra will open their performance with a piece by the Tenerife composer, Cecelia Diaz, who studied at The Royal Palace Of Madrid. This is a selection typical of an ensemble famous for its ‘courageous and reformist’ performances and they will also include selections of works by Haydn, Bartók, Arriaga and Ginastera. Astoundingly, this concert is advertised as ‘free until full’ so it might be advisable to arrive early.

Another Festival event will be presented on Tuesday, January 22nd at the Teatro San Bartolomé, with a concert by The London Conchord Ensemble, one of the most prestigious chamber formations in Europe. Especially valued for their imaginative programs and their charismatic performances, they have won numerous awards over the years, and will bring to Lanzarote a repertoire including works by Shubert, Francaix and Beethoven.

On Friday 1st February, The Orchestra Of Cadaqués perform in the auditorium of Jameos del Agua. Formed by many of the best Spanish musicians of their time, most with more than thirty years of experience on the stage, the orchestra returns to the festival under its director, Anu Tali, to perform Mendelssohn and Beethoven. For work by the latter, the orchestra will be joined by the legendary master pianist Joaquín Achúcarro, still performing at 85 years of age. Tickets are 40 euros for this venue, with its superb acoustics.

The 35th annual Classical Music Festival will continue on Sunday 3rd February when The Convent of Santo Domingo of Teguise welcomes The Baroque Orchestra of Tenerife.

This group of the first generation of young interpreters to benefit from a residency scheme established here a year ago will be performing their first concert. From Monteverdi to Bach they intend to gather the best of 17th and 18th Century music for new audiences. Tickets are only 15 euros to hear this emerging and ambitious orchestra.

The closing concert of the Festival in Lanzarote will be on February 7th, at Teatro el Salinero, in Arrecife, with The Minsk Philharmonic Chamber Orchestra. Created two years ago by soloists from other musical formations from the Belarusian capital, their public appearances create a huge anticipation, so they are currently performing regularly in concerts and festivals throughout Europe. In Lanzarote they will interpret a repertoire that includes a piece that could prove another highlight of the Festival, by the Gran Canarian composer, Carlos Gonzales, in addition to works by Britten and Shostakovich.

This year will no doubt bring us new artists and events in diverse forms of music. There are plenty of restaurants around the island that provide live entertainment and, although I don’t usually enjoy cabaret style presentations, I am looking forward to visiting The Italica restaurant in Matagorda for one of their Wednesday evening ´Rat Pack´ tribute events.

In my childhood, The Rat Pack, or some of its individual members, gave me three of greatest televised arts events I have ever seen, in performances that inspired me to later follow a career in music journalism.

Sinatra singing a lazy, slightly inebriated Set Ém Up Joe, and asking for ´one for my baby and one more for the road´ has lived in my memory ever since I saw it on mum and dad´s little telly when I was nine or ten years old. Dean Martin´s Little Old Wine Drinker Me, sitting half on and half off of a high bar stool, was another great performance piece but it was Sammy Davis Junior who topped the lot. There is grainy old black and white footage of him singing (and dancing to) Mr. Bojangles and I reckon I saw this at about that same age.

Several years later, almost a grown up, taking my first tentative steps as a freelance journalist, I learned that the song was written by a white American songwriter called Jerry Jeff Walker. I came to interview Jerry Jeff a couple of years later and to talk with him about the writing of the song and its incredible interpretation by Sammy. So, a night in the company of a tribute-act Rat Pack should at least draw on some special memories.

An evening listening to that kind of music, and to some of the Rat Pack’s repartee, whilst looking out on a sea lit by the Matagorda moon sounds pretty good to me. We’ll be going with a couple of friends, so Roy and I can play the parts of the mobsters who reportedly frequented Frankie’s shows. I don’t know if our ladies will play the part of gangsters’ molls or of glamorous film-stars of the time like Marilyn Monroe or Lauren Bacall.

Our review in a couple of weeks, though, will probably reveal Dee and I to be less like Frank and Marilyn and more like Jack and Vera (Duckworth) !

I am sure there will be live arts events over the next few weeks to please whatever your artistic tastes might be. If you decide to support any of these gigs,  and you notice a guy sitting in the audience nervously nibbling his biro, with his wife digging him in the ribs and reminding him that instead of sitting there star-struck he should be making a few notes, please come over and say hello. We´ll be pleased to see you.