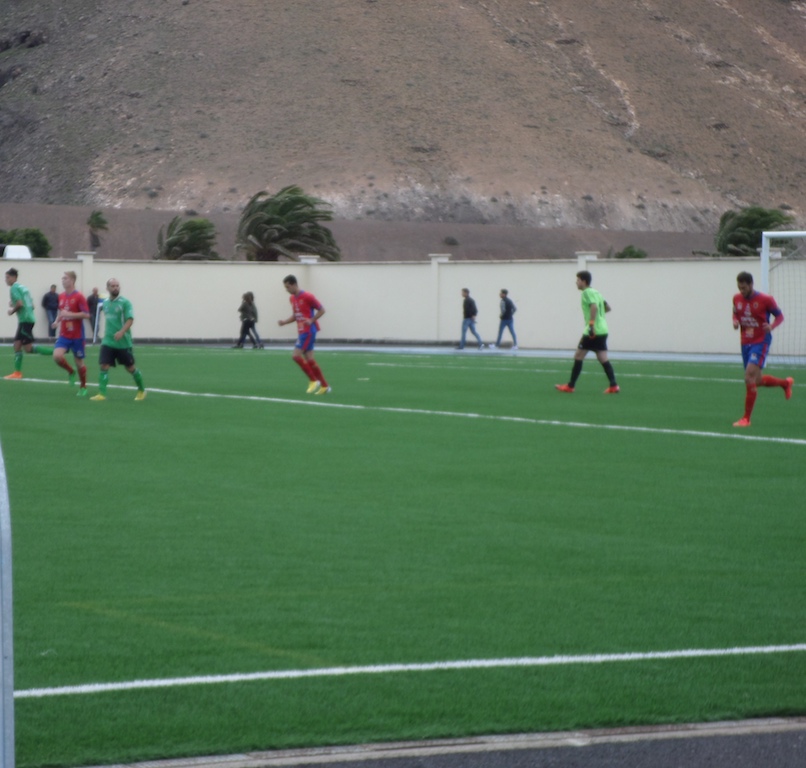 There is a wonderful canon of English literature acknowledged as such around the world but Spain, too, has produced great literary works, from Cervantes’ Don Quixote to the poetry of Lorca. For most of us born in England it is only thanks to the work of translators that we can fully enjoy those writings by reading them in English. My own lack of ability to speak and read in Spanish though, was obviously, one of my major concerns before moving over here to Lanzarote.

We have indigenous Lanzaroteños on the island, and second and third generation mainlanders from Spain, of course, as well as tourists from Germany, Holland, Italy, China and all curves of the globe. Spoken and understood by nearly all of them is the universal language of football.

Last weekend Lanzarote’s two strongest football clubs announced their 2018 / 19 season tickets were for sale and the web site for Union Deportivo Lanzarote (just search engine U D Lanzarote football home page and up it comes) proudly displayed their new kit for the season as well as details, in English, of their new signings. The club play in Arrecife at a ground that is clearly signposted as you exit junction 2 of the circunvalacion and head for the town centre. The ground, less than fifty yards from the bus station, has seating on two sides and thanks to excellent publicity and promo work, including the aforementioned web site, by Ian Lane, a British man now a resident over here, the club have the backing of a large contingent of similar English residents and even holiday makers as well as plenty of other ‘foreign support.’

There is plenty of parking around the ground and something of a carnival atmosphere. There is an elderly gentleman who has long connections with the club and who, on match days, seems to define the club to newer supporters.

He races, by my standards, along the touchline and his rants and anger at what he sees as foul play and wrong decisions can be heard at all four corner flags. He kicks water bottles, and bangs on the advertising boards. I’m a man from Manchester and he reminds me of someone from Old Trafford. Who can it be?

With an average attendance of around 1,500 the atmosphere is generated in part by this man and by two local ‘entertainers’ who use megaphones to urge the crowd into long and loud songs of support. Lanzarote stadium is a safe place to watch your football, though. The few visiting fans from other islands who come to watch their local team play on Lanzarote do so in safety and frequently join in the vibrant atmosphere.

There are food bars serving drinks and snacks, much needed in the Lanzarote heat. Although the roofed stand offers at least some respite and shade the noon kick offs on a Sunday seem to defy the local siesta logic. There is always a cooling breeze, though, and t shirt and shorts is a great attire in which to watch football, compared to the two pairs of long johns beneath jeans and trackie bottoms, two vests, shirt, pullover, anorak, overcoat and balaclava, thick woollen socks and wellington boots fans had to wear to watch my beloved Bolton Wanderers in the UK. Luckily, working for twenty six years for the club on match days as crowd safety cctv operator I had the best seat in the house, in the control room with the match command team.

Lanzarote play on a high grade artificial pitch and deliver good quality stuff. For what is effectively a semi pro league, fitness levels are incredibly high and the game over here is a tough and athletic one. Lanzarote have twice reached the play off places for promotion in the last three years but have thus far been unable to make the leap that would see them taking on sides from mainland Spain.

My season ticket costs me a round twenty five pounds as a pensioner with a residencia card. I park right outside the ground and can invariably find a seat looking along the half way line.
The colours and replica kits of the crowd, half time raffles and presentations to junior players and tributes to retired players make each match a special occasion and my trips to the ground and back to Playa Blanca take me only forty minutes each way. Admission without a season ticket is less than ten euros per game so it’s well worth turning up to try it out, and if you are resident here, then a season ticket might prove a wise investment.

The opening home league game of the season for UD Lanzarote is on Sunday 26th August and is a humdinger of a local derby against the only other Lanzarote team in the division, with US Yaiza the visitors. For those who have not yet sampled football on the island, this would be a cracking sampler.

It is one of the two matches per season that cause me some discomfort, however, as I am a season ticket holder at both clubs, and don’t know how to honour my loyalties. I shouldn’t really be swayed by the fact that when I purchased my first Yaiza season ticket a couple of years ago it was handed to me by the club president who also gave me a green and white team coloured club cap. I am sixty odd years old but like a young kid I put in on immediately and have worn it with pride to every home game ever since.

Yaiza’s is a smaller ground than Lanzarote’s and is built adjoining the town’s police station. That would have been useful at Bolton Wanderers over the years but a police presence of any kind is a rare sight at any of the matches in this league. Not only is Yaiza a small ground but its encasing walls are also fairly low, meaning that a hefty goal line clearance can easily sail on the island’s wind and be carried out of the ground, where it begins an inexorable roll to the sea at El Golfo or Playa Blanca several miles, downhill, away. There is, however, a plentiful supply of balls on the touchline so one is thrown on whenever this should happen. Then a club stalwart volunteer goes running out of the ground to look for the lost ball. At the final whistle, if he hasn’t returned, a search party is despatched, though whether to look for him or the ball isn’t always clear.

My journey up to Yaiza is one of only fifteen minutes and with their crowds of around three hundred or so, I can park right outside the entrance gate, and step out of the car into the ground. I did this for weeks until it dawned on me that I was parking right on the spot where those wayward clearances tended to land.

The ground doesn’t boast a roofed stand, and only the far side of the ground from the entrance has rows of seating. I prefer, instead, to take my own fold up chair, that you may have read about in a previous review, and set up on the more shaded side of the pitch, knowing it never rains over here. There was one occasion, though, when it began to pour down from a clear blue sky. Not knowing the local protocol, nor what to do with my chair, I sat out in a freezing storm while two hundred fans all huddled under a restaurant canopy that could shelter only twenty. So, four Spanish guys I had never spoken to crept out to stand behind me and, with each of them holding an umbrella over me, started Singing In The Rain ,… in Spanish !

The ground sits at the foot of the impressive Montana la Cinda which, at occasional mid season night fixtures, takes on a somewhat eerie and holy hue.

Yaiza, like UD Lanzarote have flirted with promotion recently but there must be cost efficiency impact in achieving promotion to a league that demands much higher running costs. Working in the next division above would, though, see opposition including Real Madrid and Barcelona second teams!

Sharing status with UD Lanzarote and US Yaiza last year, but sadly for one season only, were Haria from the North of the island. Their young side couldn’t avoid a swift return to from whence they came, so I am glad of the two opportunities I took to visit their lovely ground, nestled in the vale of the town, with fantastic views of the hills of the region. Being more geographically remote than the other two clubs, Haria attract a very local, and very vocal, fan base.

In my usual compare and contrast mode, I look at the model of football over beside that I saw change so much in my forty year life time in the UK.

Attending a match over here seems to be much more a family tradition and it is a pleasure to see mums and dads with their young children, who have free rein to wander around, and even to play on the pitch at half time.

In fact, Yaiza fans see kids on the pitch not only at half time but also occasionally when a father scores. It is not uncommon to see a small child running on to celebrate with daddy ! In fact seeing one of the side’s toughest characters, … the striker I personally dub ‘moaning Miguel’ because of how he moans at defenders who tackle him, screams at referees who don’t give him a free kick or penalty, yells at team mates who don’t see him when he is in space and berates those do see him, but then can’t pass the ball to him with sufficient accuracy,… running away, after scoring his weekly wonder goal, to hoist a young child into his arms.

As in the UK, football is part of culture and family life over here but on Lanzarote you can support a team, not a franchise. Your side represents with pride their town or village and play passing football on the ground. And below the first teams of UD Lanzarote and US Yaiza stands a firm infrastructure of junior football teaching youngsters of both genders a set of life skills that will enable them to become adults who contribute to society.

It can be a bit difficult keeping up with club news as there no match day programmes and other than from Ian Lane on the UD Lanzarote home page it can be hard to keep updated on injuries, signings and team selections. And you do need to check kick off times as they can be altered at the last moment due to suddenly altered flight or ferry schedules.

However, by supporting football on Lanzarote you become part of the present and future of the island, and in so doing, even learn to speak better Spanish. For instance I have discovered in only three seasons that in Spanish, as in English, there are hundreds of adjectives that describe a referee.