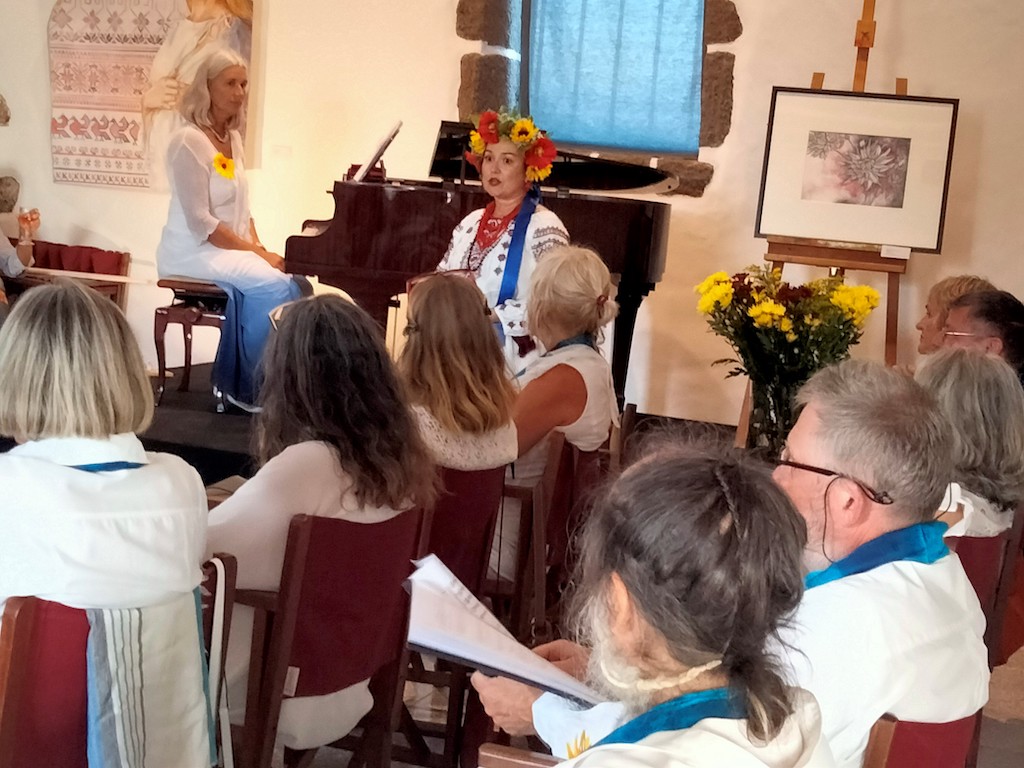 It was a badge of honour in our youth to sing Give Peace a Chance and anti Vietnam-War songs.Tom Paxton wrote songs like Wake Up Jimmy Newman that told of the horrors of that war and Talking Vietnam Pot Luck Blues that told of how American soldiers sought respite. Those were the days of CND marches and we sang our protests loud and proud. We were fighting a war against war,… which ultimately we lost. War and wars continue, we are still here, just about, but the voice of protest have faded, too tired, too scared, too old to dare. In some ways that made the Fund-Raising Event For Ukraine that we attended on Lanzarote recently all the more significant. So come follow your art down sidetracks & detours to a beautiful cliff top villa that offers views, literally and figuratively, that must surely prevail.

On the evening of Friday 24th June we attended a Fund Raising For Ukraine event. it was actually the inauguration of an arts exhibition which was then scheduled to run for some time.. There was a brief choral performance too, which we also immensely enjoyed.

The In Dulce Jubilo Choir grew out a German Church in Puerto Del Carmen here on Lanzarote. These days, however, having become an independent choir, it is now under the direction of Marianne Whelpdale, a lady we have featured on these pages in the past. Marianne had been a member of a number of choirs, before accepting the request to direct In Dulce Jubilo in works that are mostly classical in genre. The choir has a playing squad of about twenty members but there are occasions, of course when members are away from the island perhaps visiting the homelands of Ukranian, Austrian, Spanish, British, Swiss, Polish and German.

Marianne recently explained her directing style to Gazette Life Lanzarote, a monthly, glossy magazine. Apparently she thinks of the role of musical direction of a choir is more of a dictatorship than a democracy, before laughing and saying she likes to think she ´orders them around in a loving way !´ She often directs from her position at the piano with the choir, and when not in performance or in rehearsal she is planning, in advance, new playlists and is even now creating a programme for Christmas performances.

Prior to covid, the choir, of course, sang in Lanzarote Churches, and even on other Canary Islands, over religious periods such as Easter and Christmas but the choir was unable to rehearse during lockdown and Marianne didn´t feel able to direct properly via Zoom. The rehearsals they were able to conduct outside as restrictions eased must have felt like a lifeline to a choir that is now looking for male singers and promises to make welcome anyone who would like to join them to sing, … especially bass and baritones !

Marianne would also like to hear from anyone who has ideas for special performances of any kind, and this event at The Camel House on Friday 24th June proved just such an occasion.

One member in particular had a special, reason to take part in the concert, as she is constantly worrying about her family back in Ukraine. She was sad no doubt, but very proud, that the choir was wearing blue sashes and the brilliant yellow sunflowers that symbolise Ukraine.. She is originally from the country´s Poltova region but was living in the city of Kyiv when she met her Spanish husband before he got a job here in Lanzarote, and the couple moved over here.

That city they left behind is now horribly damaged, as we have seen on our tv reports. Natalia Tunik arrived on Lanzarote over ten years ago. Since the Russian invasion of her country she has been campaigning and fundraising to aid Ukraine, whilst taking part in concert like tonight´s over on mainland Spain as well.

Natalia spoke in some depth about her thoughts on Putin and the invasion to Gazette Life Lanzarote but it would be invidious for us to extrapolate here from what was an exclusive interview. It is a sad and damning piece and we would urge you to read it in full in the June edition.

Based in Spain, Olena works with all the drawing and painting media. She uses the full palette and has a number of distinct styles ranging from surreal through neo industrial to real life.

Olena says of her methodology:

´I am like an architect in my creative space´, she says. ´I like to build the painting in my mind. I need the vision locked in, it has to be defined, I then decide on the media I want to use, then the size of the work and finally the layout´.

The Camel House, pre-covid, hosted quarterly classical music events in its gorgeous main hall. In fact we reported on several of them here at Lanzarote Information / Sidetracks & Detours, including a very special piano recital by Russian player and mentor Veronika Shoot. I guess that suggests that music recognises no border patrols but instead will play around the world, with no prejudice and no political agenda.

Beautiful venue though the Camel House might be, it is difficult to locate as most places of paradise, but it is worth the last mile of the journey, down a twisty single track road over the cliff tops at Macher that can feel pretty hairy at times, and you breathe a sigh of relief as you follow the signs into the ´car park´ adjacent to a sprawling property of secret gardens, many rooms and outbuildings, a major concert hall and even a couple of retreat rental venues to let.

The car park, though, is the final part of the adventure, with randomly placed palm trees to make your way round, as well as the odd carelessly parked vehicles, bigger and brighter than mine and much more expensive to remove dents and scratches from. The car park is even a little bit uphill and down dale but although the picon sometimes slips beneath the wheels its better than Glastonbury mud.

Once we had parked up we followed one of the single-path trails round into one of the courtyards, drawn there by the gentle buzz of conversation that suggested that was where the audience was gathered. The choir, male and female, dressed al in white with Ukranian colours motifs, were mingling with the audience. There was a colourful and busy table serving typical Ukranian sweets and savouries. There was also wine, sangria and fruit punch sin alcohol that was lovely, and apparently good for my diabetes.

Having partaken of a glass (or two) Dee and I wandered into a concert room we hadn´t seen before, and looked at the intriguing and thought provoking art work on display and available for purchase, to rasie funds for Ukraine. As we stepped inside the afore-mentioned Natalia, in full national costume, handed us a free programme with lyrics in three languages of the pieces that world be performed in a few minutes time.

The audience were called in with the choir already seated, and the artist, Olena, formally welcomed us all to her exhibition. She teared up a couple of times as she referenced family and friends she remains so worried about and uncertain of their safety in Ukraine. She managed to say all the right things, with some useful to us smatterings of English, to remind us of what tonight´s concert was all about. You might think that would be unneccesary but no matter hopw horrific are the image we see on our screens nothing prepares us to see and hear somebody directly affected by those horrors.

Then In Dulce Jubilo performed a sombre, evocative and very moving opening piece.

Natalia then stepped forward again, and somehow, with Marianne at the piano to accompany her, managed to paint on a smile and sing clearly and proudly a carefully chosen selection of music that spoke of the heart and soul and pride of her country. with its ´vast skies, filled with stars´, in a dreamy but defiant voice.

As we drove home we discussed how a concert brought about as a response to war could have been so uplifting, and whether or not we should feel guilty at having so ejoyed it under these dreadful circumstances. However, the artist, the choir, the vocalist and Marianne at the piano had done their job. They had sent us home to count our blessings that we enjoy here on Lanzarote and to wonder all over again how Mankind seems hell-bent on destroying a world that offer Mankind so much.

Just before I close this piece I ought to say that a notification has just flashed on to my screen to say that a band in Russia have just submitted their anti-war song for consideration fot he forthcoming Eurovision Song Contest, and have had to immediately flee the country for fear of resprisals.