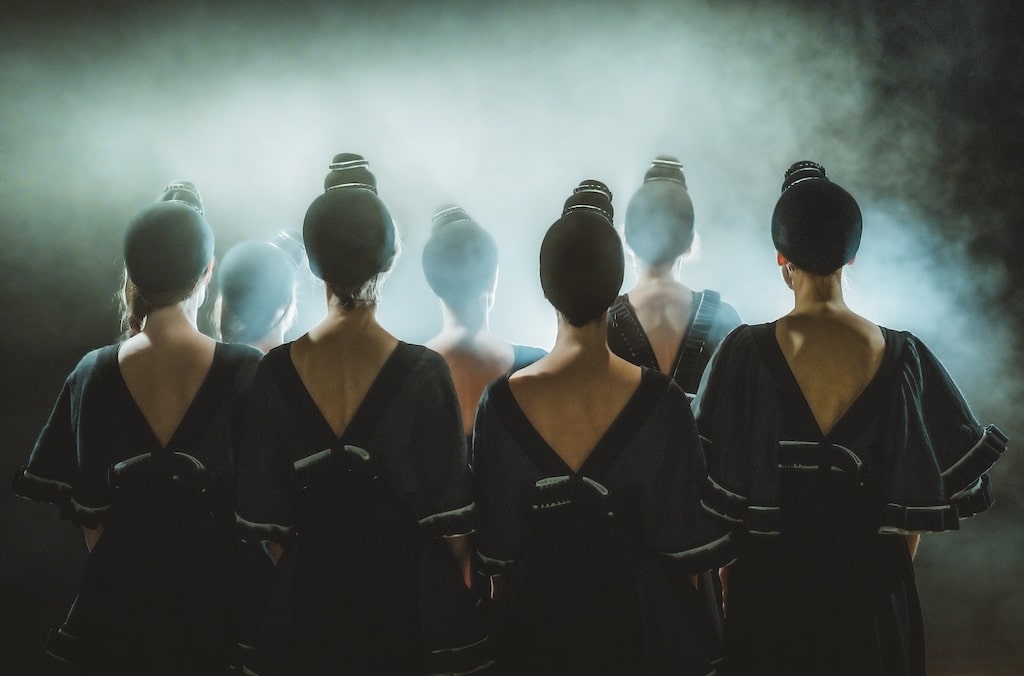 The seventy minute performance tonight was called Rooms And Rituals and began only after it was explained to the audience that all we would be hearing was ´of the here and now,´ meaning we were told that every sound would be produced by the six ladies we would see performing. There would be no pre-recorded backing tracks or tricks, no inclusion of sound effects slotted in and no outside interference.

Then, the lights in this centuries old convent went out, or were switched off, and we were immediately plunged into a darkness that somehow took away our conception of Time. Silence descended. Slowly, low spotlights illuminated huge paintings or photographs, hung around the high and wide walls of the room, of rock-scape of cracks and crevasses, edges and falls, fissures and fusions. Uninhabited. Yet from beyond the one hundred and fifty or so people I had seen in the audience before darkness fell, we could see tiny lights moving slowly towards us. As they approached we could hear whisperings; unintelligible but non-threatening, unidentifiable but strangely familiar. As they arrived in the centre of the floor it was already apparent this was not to be a performance but instead was to be a journey through times and places we had never seen and would not be able to easily identify.

Anyone else in the audience who had, like us, visited the wonderful Agua exhibition by Ildefonso Aguilla in the Cic EL Almacen recently might have been reminded of the sonic recordings the artist had made of the sounds of the earth heaving and moaning and shifting. His recordings seemed to call us back, or forward, to a time before, or after, Mankind.

Similarly these Trondheim Voices took us on a trip through apprehension, into wonderment, and out into an infinity created by, but defiant of, technology. Their voices, with no words, seemed to be rising from the bowels of an earth, through its heart and soul and out into space.

Weirdly, in this place not yet invented, untainted, that seemed to be of a world being born, or re-born, and that might have been either utopian or dystopian depending on how each of us received their message of no vocabulary, it was almost as if they were ´calling occupants of inter-planetary, most extraordinary craft.´ That was a song, by Klaatu, that opened the night transmissions of Radio Caroline in the nineteen sixties, the decade of the space race. The song was subsequently recorded by The Carpenters, with a supporting cast of 160 musicians and risers and faders, fluffers and tweeters looped music and segued music and graphic equalisers.

Tonight six voices, and seven microphones, recreated similar sounds from an age before Man created gods and God created Man, from an era before, or after, there had been life on our planet. These sounds were a message to, or from, life out among the stars to or from an earth mewling its birth cries or suffering its death throes.

This might have been ´mood music´ from millions of years before that phrase had ever been invented, or from ages after that phrase had been forgotten, but musical it all certainly was. And to call it moody does not do it justice. There was greeting and rejection, confidance and conspiracy among these notes that were yelling ´we are here´ or perhaps ´don’t let them find us.´

´Words´ were whispered, hissed, breathed and broken in confrontation and conciliation.

In perhaps the most accessible part of the performance a few pieces of almost recognisable language spoke of fire and the need for it, a clue perhaps to a historical time-line, and suddenly all these sounds became evocative, and comforting, and might have described a collective identity. For a while it was if we are all a close knit community, sitting round a campfire singing the old songs together, sharing memories we had made, and dreaming the same dream. Of course, the fire crackled and spluttered and sparked arguments and hisses from the people around it.

The light of the fire burned out, the voices and the sounds faded, and the communication between Man and his God, or from God to his Angels, or from Time to Time was over.

I was left with no firm idea of what we had heard and have failed miserably to formulate one in this ´review.´ It had been scaring but reassuring, detached but somehow embracing of us, and had been beautifully, tunefully, majestically and magnificently performed.

And then they were gone, leaving us all to wonder what we had been listening to. The lights came up and as the audience filed out we recognised some good friends, from Dee’s yoga group, with whom we share not one word of common language,

¨Non flamenco,´ Marco said as he shook my hand.

We hadn’t been invited to a dance though. We had been invited to communicate, and somehow at the end of it all Marco and I had shared a brief joke in a way we might never have previously been able to.

Actually, though, maybe it had all been a dance. For as has been said of Anthony Burgess´ work, A Dance Through The Music Of Time, this delivery had been ´unique, playful, liveable and literary.´ Uttered by Norwegians to a mainly Spanish audience, these sounds had been ´inelectubaly English´ and ´wonderfully funny.´ They carried an ´entire world history.´

The appropriateness of that title of Rooms And Rituals has not yet come to me, for my head is still too full of concerns about the sacred and profane and other reflections on the light years of travel I journeyed on last night.

Perhaps, though, I had not travelled that far, but had simply lived through a moment in a universe.

Trondheim Voices will soon have been in existence for twenty years and in that time have become widely famed as a vocal group delivering improvised performances in the jazz genre. The Norwegian group was formed to take part in a Christmas Concert in 2001 that had been initiated by Minnorsk jazzsentre (MNJ) in 2001. They have since established themselves, with a consistent vocal ensemble delivering bespoke material or arrangements. A little bit like our own Lanzarote Ensemble, they are state-supported and include a core of around fifteen singers, although the crew and artistic directors vary from project to project.

Tone Ase is the current artistic leader of an ensemble held in high regard by MNJ. The group’s performance of compositions by esteemed composers like Live Marie Roggan and Eldbjorg Raknes was nationally broadcast live by NRK P2. They also appeared at Moldejazz in 2003 and again in 2006 in a production of Norwegian Sanctus by Tien Bierklund. In this, Trondheim Voices interacted with Trondheim Soloists, Arva Hennksen and Stuan Westerhus. In 2008, they then premiered a performance called Bingo, which featured lyrics by Sin Gjaere and music by Elin Rosseland, Stale Storlokken and Live Maria Roggen.

After releasing their first album in 2010, Trondheim Voices worked with the percussion group, Batagraf, on a piece written especially for that pairing by pianist and composer John Balke. It was performed live at Moldejazz 2011.

Jon Balke, by the way is, like Trondheim Voices over here on Lanzarote this month to take part in the 16th Festiva De Musica Visual, and performed his work, Warp, in The Auditorio De Los Jameos Del Agua on Saturday 12th October.

Trondheim Voices & Asle Karstad were officially bringing the Festival to a close, tonight here in the Convent of Santo Domingo de Teguise, on Saturday 19th October.

The sound effects, created by Karstad, are designed to allow the twelve voices of the group to move freely through space, making each performance a unique experience.

Bearing in mind the assertion by the late American songwriter, John Stewart, that ´people like what they know but don’t know what they like´ the promise in the programme might have been seen as disconcerting. The information that ´Trondheim Voices challenge the limits and conventional format of a vocal concert, in constant search of new avenues of interaction between singers, audiences, environments and new technologies´ had my wife, Dee, on edge from the beginning. Interaction is not her thing.

Rooms And Rituals was composed to allow the vocal technique and timbre of each of the singers to create wide soundscapes loaded with subtle sounds, ambient rhythms and “disturbingly beautiful choral moments”. More to the point, the use of exclusive sound effects devices, designed by Asle Karstad, which allow each singer to move freely through the room, generate an enveloping atmosphere and break the barrier of the conventional stage. This gives the audience a unique listening experience in which both singers and the audience enter a constant state of discovery.

Musician Asle Karstad was in charge of sound effects.