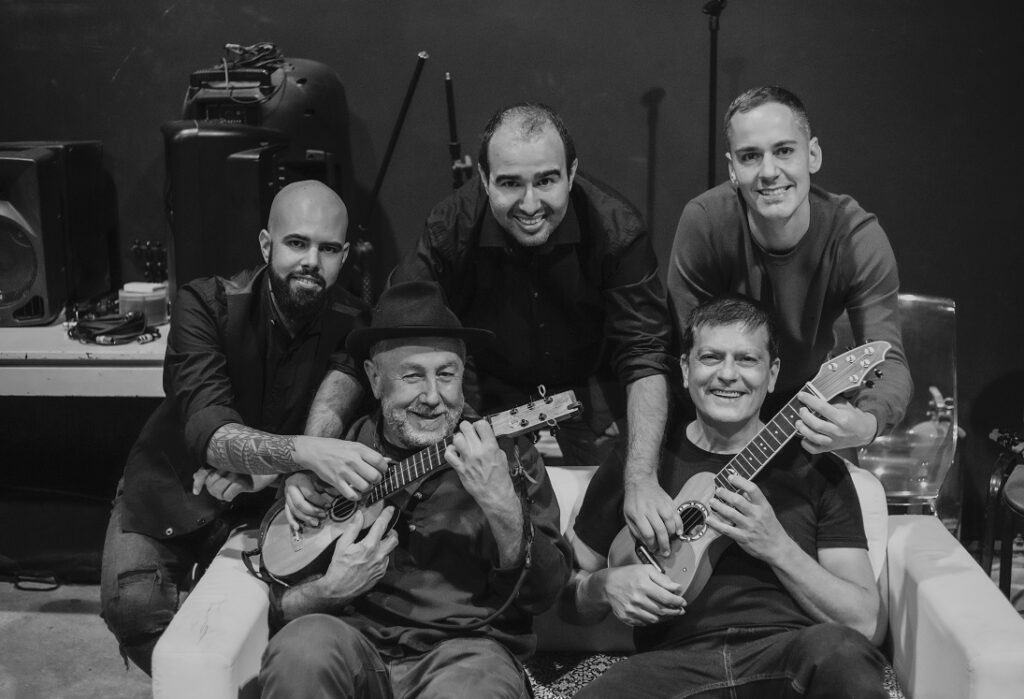 Twenty years after the premiere of Timples @ 2000,  Benito Cabrera  and  Domingo Rodríguez- ‘El Colorao’-  returned to share the stage. This time they were joined by  Germán López ,  Yone Rodríguez  and  Althay Páez . This was a commitment to Canarian music and popular culture, updating the evolution of Lanzarote´s most emblematic instrument.

Tradition and contemporaneity once again strolled hand in hand with the timple as a vehicle; a direct witness to the transit of our roots in these first years of the new millennium. The songs, carefully chosen, were arranged for the occasion by Manuel Bonino, Carlos Vega, Yul Ballesteros and José Brito.

Four timplistas took front row seats with an orchestra containing brass and wind and stringed instruments including acoustic guitar, Spanish guitar, and violin as well as upright bass. There was percussion and hand held sound-.makers and bass and also. and most amazingly. a female vocal shape-maker.

The production values on the night were of the top level. A wonderful, shifting and shadowing light show and an always interesting backdrop of timeless images of The Canary Islands as well as abstract moving pictures seemed to me to reflect the universe in which this world exists. As each separate piece of music began there were graphics shown giving the title of the work and the names of its composer and arranger.

Conducted by a lively, always smiling and charismatic musical director this ensemble brilliantly found ways to follow, lead and assimilate the sound of the timple into the more familiar orchestral sounds. Each song has been arranged to leave a  more popular or contemporary imprint, always with the leading role of the timple, capable of empathize with genres such as jazz, world music or classical music.

The music delivered was more than ancient and modern. It was somehow prehistoric and futuristic with echoes of the sounds of the Amazaon Rain Forest, asd captured by Dremacather all those years ago. There were also several hues of the blues, some of the grand scope of Aaron Copeland and even Latin American rhythm. The inclusion of the vocalist in this soundscape wsas only occasional and always brief but every time it took me back to similar music I fell in love with during the seventies, eighties and nineties in the UK. I found myself thinking of The Chieftains of Ireland, The Rankin Family of Canada, and even some Cajun sounds of the like of Beausoliel from America. I loved the banjo of Bela Fleck at that time, too, and I know from my son in South Korea who still follows his work avidly that Fleck has moved now towards these sort of occasional ensemble soundscapes-

The closing number here tonight at the El Salinero Theatre in Arrecife actually took me back to halcyon nights when friends like Steve Jones, an Australian multi stringed-instrumentalist would lead guitartists, pipe players, bhodran players. fiddle players and scores of table top tappers and whistlers in the interval jam session at the Tuesday night folk clubs at The Gallows pub  in Milnrow near Rochdale in the UK. These would last often for half an hour or until all the raffle tickets had been sold and would conclude with a medley of reels and airs. They felt, perhaps rather than always sounded, wonderful and bouncy and atmospheric but were being played, not without skill or energy, by musicians who were merely legends on their own street, whereas tonight´s programme, including its closing jam session-like piece, was played by international, world class musicians, offering inspiration to, but also laying down a marker for the next generation to carry Lanzarotan and Canarian music into the future.

The young graduate musicians we saw delivering a public performance in Teguise the following day demonstrated enough musical skill, empathy and personality to suggest their generation is ready to pick up the baton.

We saw and heard a performance by some of the best and most promising students from the timple schools of Lanzarote And The Canary Islands under the strange ensemble name of Gingers Timplists. This took place at Convent Of Danto Domingo in Teguise, Lanzarote.

Around twenty five young students, accompanied by a professional mentor and guitarist, demonstrated their skills on timple of guitar, with on of the highlights being a student from Aula De Musica Gabriel Cubas playing the Mark Knopfler music of Why Worry. This song by the former leader of Dire Straits is usually played behind the lyrics that speak of of comforting loved ones but here is played slowly and beautifully as a stand alone piece of music.

Knopfler included this song on the Dire Straits album Brothers In Arms and the eight minute track was also covered by The Everly Brothers on a 1985 album. Knopfler also duetted the song with Emmylou Harris on their Real Live Roadrunning album.

The island´s Minister for arts and culture made presentations to school teaching representatives from the schools involved and to each of the performing musicians as well a framed poster of the band to the ubiquitous master of ceremonies at such events. We have seen him so many times, smiling and gracious as he introduces the acts and gives details (unfortunately in Spanish that we cannot translate) of careers and recordings to date and the like. He should be fully employed for the next several years. He is the best there is at the job.