This Is Christmas With A Light Touch 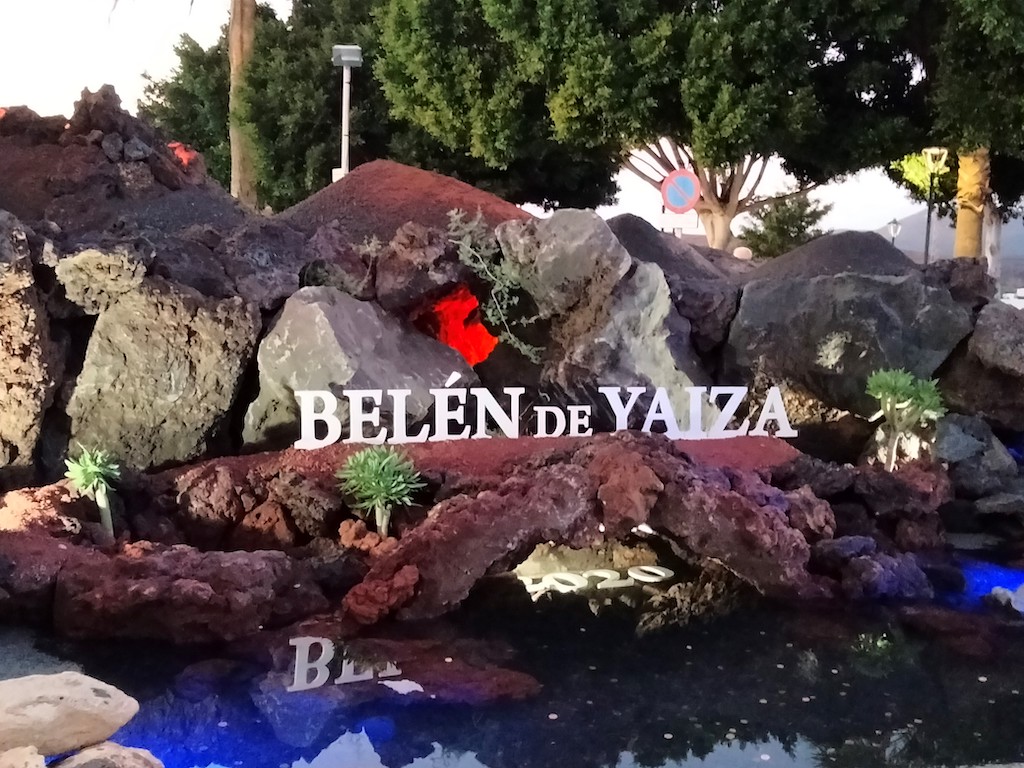 These are dark days right around the world at the moment and wherever we currently travel we are met by an eerie silence, so it was a joy to drive round Lanzarote after nightfall one evening this week and gasp at the simplicity and splendour of the Christmas lighting and Belens that have been installed in every town and village on the island. So, come follow your art like a wise man following a star, down the off-road sidetracks & detours that rise and fall and zig zag around our coastlines and up and over our mountains and volcanoes. Look at the Christmas trees. Read about a Christmas delivered with a light touch.

Lights and Christmas tree now adorn all the motorways and streets, town centres and village squares all across Lanzarote and create a splendid sight. Travelling from one end of the island to the other in the darkness is a far more rewarding and much quicker experience than crawling along Blackpool’s famous golden mile of illuminations.

It all seems perfectly understated. Artificial trees are tall and strong but not imposing, lights depicting angelic figures or festive images fly at every lamp-post and stringed lights are draped above every road at sensible intervals. Colours and shades are perfectly blended and nothing flashes.

Every town and village has its own Belén. These are the equivalent of, but on a somewhat grander and more artistic scale, the small nativity scenes of Jesus in the manger that decorate UK communities, too.

On Thursday 11th December, the Yaiza Nativity Scene was officially inaugurated. Traditionally this Belen is the island’s largest outdoors installation and often attracts the most visitors The blessing, by the local parish priest, Juan Antonio Gallego, was made on the preceding Tuesday.

Designed by Alexander Dorta, the Belen occupies 120 square meters of outdoor floor space and contains emblematic locations of Yaiza such as The Mountains of Fire, Salinas de Janubio, La Geria and the Charco de los Clicos; as well as representation of all the municipalities of the island through its characteristic hermitages and churches.

So what we see before us as we walk around the construction is effectively a multi-dimensional route map for the journey we are about to take in our car. We will cross the Timanyfaya Volcano field that are The Mountains Of Fire and we will skirt round the salt pans of Salinas De Janubio, and drive through the vineyards of La Geria where the numerous bodegas each have their own light show strewn across their gates and we will take a figure eight circuit through beautifully decorated towns and villages. Some of the most effective and affecting scenes are at venues where the Belens have been placed as adjacent as possible to the tiny and beautiful white-walled churches of the towns such as in Tias. The proximity of church and the installation adds a spiritual gravitas.

Apart from the lights and belens installed by the municipalities there are also lighting and Christmas tree displays created by commercial venues and the scene at the Biosphere shopping centre in Puerto Del Carmen is beautiful and aimed very much at children whilst the indoor shopping complex at Dailand in Playa Honda contains two enormous artificial trees adorned with artificial presents, and foam-constructions of elves and gnomes and Santa´s little helpers seem to be running around all over the place.

The hanging of gift boxes (presumably empty) on trees in people’s gardens is a tradition we have previously seen enacted in towns like Tachiche and Tinajo but this year, as around the world we´d guess, trees have been left bare in this covid ravaged Christmas.

Neither have we seen groups of carol singers, or even any formally organised Christmas recitations by municipal choirs, but before setting off on our trip round the island we did call in at the Casa de Culture in Yaiza for a performance by Rancho de Pasquas.

This was a ten strong musical ensemble and vocalists, and there was an upbeat percussive and uplifting sound provided by the eight men and two women on a number of guitars and timples, as well as a percussive instrument and what looked like a round-backed mandolin. That these musicians were prepared to give a performance at all was remarkable. They had to wear masks, and could remove them only if they had a singing part in a song, to an audience of only twenty five people, themselves all wearing masks and spaced widely apart in a room that normally comfortably holds audiences in excess of a hundred. The musical combination deserved the prolonged applause at the end of the show, and so too did the staff who had not only overseen fair distribution of free tickets but also had, on the night, ensured observation of all covid protocols.

We had time for a lovely meal with our friends Iain and Margaret at the Seven Leaves restaurant in Yaiza. My huge steak was beautifully cooked, Dee’s fish-of-the day, probably caught at El Golfo earlier in the morning she proclaimed as ´excellent´as did Margaret who had the same. Iain had his favourites dish there of a kind of pork stew. With a good bottle of local red wine and a couple of beers and apple cake and ice cream for dessert, we were, like the camels in the daytime over Timanfaya, carrying reserves in our hump for the rest of our journey.

As we enjoyed our drive we noticed that even the road-roundabouts that have permanent arts installation (mostly of Manrique’s wind toys) had Christmas lighting added too, magnifying the wonder of it all.

One particular such Manrique piece, on the roundabout in Matagorda, is about to be repaired in the new year as it’s ´all-moving parts´ seem to have stopped moving. It looks beautiful even whilst stationary, but such is the public respect for the late artist that it will be fully restored.

The stone sculpture of a sailing boat, listing starboard, with three occupants hanging over its side, is lit by blue lights beneath it to depict the sea and it is this clever little enhancement that gives the piece an incredible extra element during hours of darkness.

The drive through Arrecife was splendid, surrounded by what Miguel had described in his Lanzarote Information weekly newsletter as ´the best decorations I’ve ever seen there and is a riot of colour with red and cream poinsettias everywhere´.

Of course, Lanzarote has swathes of arid and harsh landscape, much of it inhospitable to settlement, so there are huge voids of darkness, over the volcano road, the twenty miles or so of which is totally unlit and also on the roads down to La Santa. That, however, renders the dotted lights in the small villages we can see up in the hills as diamonds in the dark, and with the sky unpolluted by earthly light in these areas the celestial lights are also sparkling, and there, that star just beyond our village of Nazaret, must surely be the star of Bethlehem, from where our belens take their name.

As we slow-drive through the tunnels and twisting, winding roads of Haria we see the beautifully lit market streets of the town, with ´fairy lights´ wrapped round palm trees, trunks and fronds !

We head back to Playa Blanca by the coast road of Matagorda, currently as under threat from road works as from covid, on to the one way system through the tourist area of Peurto Del Carmen. This mile long stretch has always been somewhat lively, nay gaudy, with its scores of restaurants, commercial shopping centre, and casino all terminating in a busy harbour, but this year it is silenced by the coronavirus, its streets empty and quiet and the lights themselves seem to be almost bereft without the tourists there to admire their splendour.

We eventually arrive back in our area of Playa Blanca signalled by the roundabouts at the end of the LZ2 motorway with its feliz navidad welcoming in lit lettering along the foot of the windmill cottage that is its permanent installation.

The small roundabout a quarter of a mile further on is adorned with lit representations of parcel boxes, and we turn left there to take a look at the Marina Rubicon area of town. Here too, we find a somewhat dis-spiriting, end-of-season atmosphere as only a few hours earlier restaurant owners and their workforces had learned of the new rules in the UK that would mean there would be few or no flights on to the island over the holiday period. Nevertheless, the lights around the scores of (closed) restaurants around the harbour seemed to symbolise a hope for the new year and offer a reminder of the glory that is Lanzarote.

We drove right around the roundabout off the car park and headed the last couple of miles back to our home. We passed the Rubicon Palace hotel, bejewelled like an Indian Princess, her huge front doors topped by a tiara effect, dripping with diamond lights.

As we left that sight behind, we were struck, almost literally, by the biggest light of them all, that of Faro De Pachiguera, the light house at the tip of the south east peninsula on the island. All night, every night, its revolving light (always redolent to me of the much more malevolent but very similar light that featured in the horror film, The Fog), shines every sixty seconds right into our bedroom window. I had no idea forty years ago that the song Colin Lever and I wrote (in Lendanear, called Nightlight, and now available at www.lendanearmusic on the Two Islands album,) and based on that film, was also an anticipation that one day a lighthouse on the ´land’s end´ of Lanzarote would, in the words of the song´s chorus, ´hold me in its arms and keep me safe from harm.´

The best way for me to conclude this article then, might be to quote again words from Miguel. The guy who so kindly offers me the opportunity to follow my art down sidetracks and detours from the platform of Lanzarote Information, put in his newsletter, in far fewer words than I could ever have managed, that ´It’s a real joy seeing the Christmas decorations up everywhere. It looks like all the ayuntamientos have really gone to town this year, presumably to cheer us all up after the unrelenting march of Covid around the world.´

Dee and I send best wishes from Shangrila Park for the very happiest Christmas to all the management, writers, staff and the thousands of readers of Lanzarote Information.

Thank you Norman, for your fabulous contribution to the website all year, in what has been such a strange period for Lanzarote. I know readers look forward to your weekly articles, and I’m sure 2021 will give you a chance to get back to reviewing the fabulous cultural events on the island. With best wishes to you and Dee for a peaceful and joyous Lanzarote Christmas. Miguel.