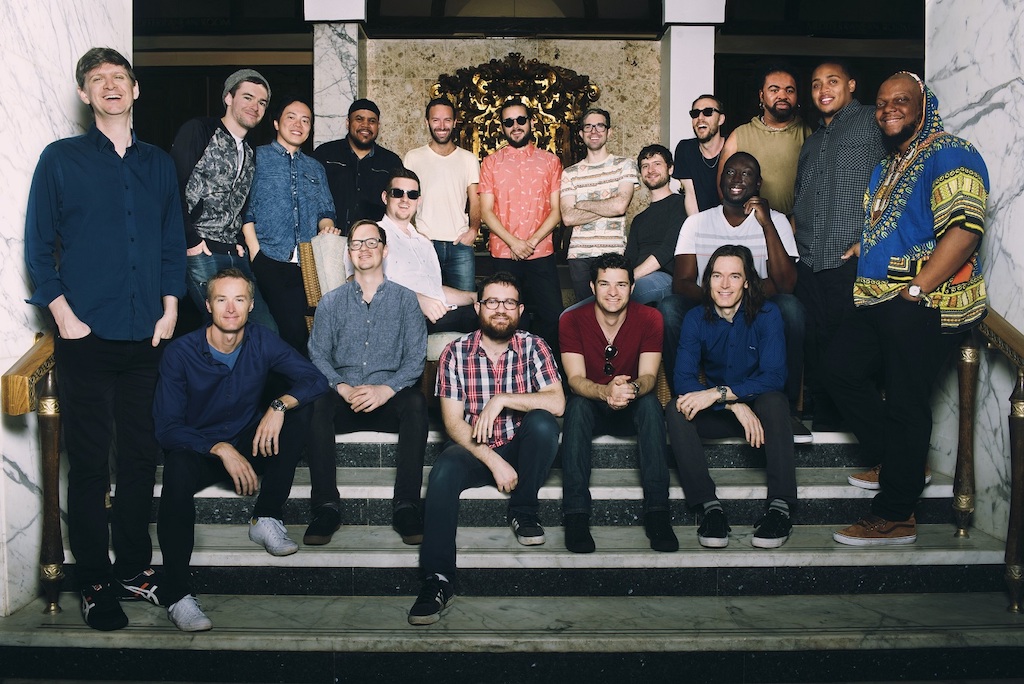 At the end of June, it was fantastic to receive a press release announcing fourteen different major arts events scheduled to take place in July and reflect our increased confidence here in re-adapting to living with a semblance of normality under a hopefully receding covid cloud. The item that most excited us was the announcement that Snarky Puppy would be appearing at El Salinero, Victor Gupa Theatre in our capital city of Arrecife, just thirty km up the road from us on Friday 23rd July. We were promised a 75 minute performance as part of the 30th International Festival de Canarias Jazz And Más.

After a decade of incessant tours and recordings, the collective formed in Texas by Michael League in 2003 and composed of about 25 musicians is considered by the press and the public as one of the leading jazz bands. In the last decade it has won four Grammy Awards (Best R&B Performance in 2014, and Best Contemporary Instrumental Album in 2016, 2017 and 2021), categories that prove that Snarky Puppy isn’t exactly a jazz band. But it’s not a fusion band either, and it’s definitely not an improvisational band.
Snarky Puppy will present the themes of their latest work, Immigrance, in which they combine an extraordinary variety of idioms of jazz, rock, world music and funk.

We have seen concerts at the same El Salinero theatre in the past month which have brought us the songs of Lorca, delivered brilliantly by vocal, guitar and trombone reviewed in our archives at Love Of Lorca dated 11th June 2021) as well as real string-jazz from Alexis Lemes, Javier Infante and Javier Collina which we reviewed under the title of Two Become Three on 12th June 2021.

Earlier, in May, we had marvelled at an incredible partnership between piano and guitar featuring Chano Dominguez and Hamilton De Holande, which we reviewed later that month in an article entitled Rhythm And Language in an article still available in our music archives.

More recently we had heard similar inclusions of slinky jazz in the repertoire of the incredibly diverse Bohemia Lanzarote and their guests. Our review of that was posted on 9th July, and remains available in or easy to follow music archives, where it is filed under the title of Language Of The Gods.

We have also delivered reviews of numerous elements of the 37th Canary Islands International Festival of Music that have taken place here on Lanzarote, so look in our files for Trio Aggiara, The Bavarian Philharmonic Chamber Orchestra and The Frieburg Baroque Orchestra.
So, we have enjoyed a wonderful few weeks of folk lore, jazz, chamber, baroque and classical music but nothing quite prepared us for this.

But, this was Snarky Puppy, a band formed as a 10-piece group by Michael League in Denton, Texas, after his second year at the University of North Texas, in 2004.

´Because I was so bad´, he recalled, ´I didn’t place into any of the school ensembles. So Snarky Puppy was my way of getting to play´.

The group has grown into an international super-band made up of ´…a wide-ranging assemblage of musicians known affectionately as ´The Fam’ In more than fifteen years since its founding, about 40 players have performed in ´The Fam´. on guitar, bass, keyboards, woodwinds, brass, strings, drums, and percussion, but six of the 10 members on the first studio album, The Only Constant, remain on the regular roster. Many past and present band members were students at the University of North Texas.

Members have performed with Erykah Badu, Marcus Miller, Justin Timberlake, Stanley Clarke, Kirk Franklin, Ari Hoenig, Roy Hargrove, David Crosby, Snoop Dogg, and many other artists. While touring, the band has given clinics, workshops, and master classes in North America, South America, Europe, Asia, and Australia, and most members either lead or are primary players in other working recording bands.

In 2005, League self-released the band’s unofficial first album Live at Uncommon Ground. Snarky Puppy’s next three albums were released independently, after which Tell Your Friends, groundUP, Family Dinner: Volume One, and We Like It Here were released on the band’s GroundUP imprint on Ropeadope.
The album We Like It Here was performed and recorded live in October 2013 at the artistic compound Kytopia in Utrecht, Netherlands.

“We’re more into setting up nice grooves that we like and sitting with things a bit longer´.

Although the band had recorded several albums with a small audience of friends, family, and guests in the studio with them, its first true “live, in-concert” album was Live at the Royal Albert Hall, recorded before a sold-out crowd at the historic London venue. The album won the 2021 Grammy Award for Best Contemporary Instrumental Album.

So, this was Snarky Puppy and we were soon wondering who let the dogs out.

They came to the stage to the sound of a pre-recorded spoken introduction, reminding us of their major career events of great shows, grammy awards and impressive sales figures. The audience went wild, although we were the oldest amongst around two hundred middle-aged hipsters as the eight musicians came out. They all had that loose-limbed gait of the jazz player,…..and then they reached for their instruments, percussion, of hand, brush and stick, piano, trumpets, saxophone, violin, guitar, and bass and a machine ! Immediately, the sound was enormous, although in the opening track there was a very deliberate cacophony to signal that the musicians were searching for, or creating, something,….. probably one of those ´nice grooves´ that they like and that they sit with a little longer. It was soon found, and over the next hour I was taken on a loud, roller-coaster of a ride through my sixty eight years of music´-listening. There was a Beatles riff that I almost identified before it floated away seconds later into what might have been a 10cc piece, but really it had a touch of Pink Floyd, Jefferson Airplane and there was a bit that sounded like The Byrds when they flew Eight Miles High. Steve Wonder was in there, I´m sure, and some of the jazz greats like Miles Davis. The previous three concert we had seen had been of the Canary Islands International Music Festival, and compared to the composure of the music of The Bavaria Philharmonic Chamber Orchestra and The Frieburg Baroque Orchestra this was a more deliberately induced chaos. The playing, though, on each instrument and by each musician was magnificent and the sounds they made were massive and majestic. It moved seamlessly: bouncing over borders, breaking down barriers, crashing through categories, demolishing division.

I couldn´t catch my breath. I turned round because I thought I´d heard Rye Cooder over there somewhere, and surely Blood Sweat And Tears must have been playing behind the curtain. I could hear all this music, but I caught everything only after three or four bars and by then it had gone, and I was in another record store, another classification and another era altogether. But all this sound and motion produced glorious, long piano melodies, stunningly beautiful sounds form the brass section, a guitar and bass in total empathy and a violin that cried sometimes like a midnight freight train and glowed sometimes like the morning sun. Tom Toms tip-toed and high hats were tipped in a percussion section that not only kept perfect time but created fascinating rhythms in support of their colleagues. And whenever the white t-shorted guy lay down his weary tune for a while he re-energised everything by finding ways on his touch-button machine to what we were hearing. Surely that was Dvorak or Copeland , wasn´t it, I turned to ask my wife but before I could form my question those two classical composers of the America we know had gone. to be replaced (in my mind) by Robbie Robertson and Doctor John and the music had changed again to a different time and place.

When the programme was brought to a close the audience rose to their feet, whooping and hollering as if this was Glastonbury or a Newport Jazz Festival. My wife jumped out of her seat in synchronicity with the rest of the audience and was beaming, behind her mask. The calls for an encore were irresistible and the lads loped out again in laid back, demonstrated some incredibly complex hand clap rhythms to us and asked for our backing. How any encore would properly bring such a quest to a close I had no idea, but after the apparent seeking nature of the wonderful performance of the last seventy minutes this eight minute bonus somehow brought the mood to a different place.

We left the theatre thinking we had found something, as had Snarky Puppy. I had, at last and in reality, been taken round the sidetracks & detours of my music and had been shown where it was formed, where it ran parallel and where it reached those eerie crossroads where Robert Johnson once stood, where it diverted, and where it all tumbled into the enormous treasure chest available to us all these days, in all sorts of formats.

None of this should be taken to suggest that Snarky Puppy are anything less that gifted, unique creative musicians. Their music was of absolutely everything I´d ever heard, and yet sounded like nothing I´d ever heard. This had been a shades falling from my eyes concert.

I was, you´ll be pleased to know, lost for words !