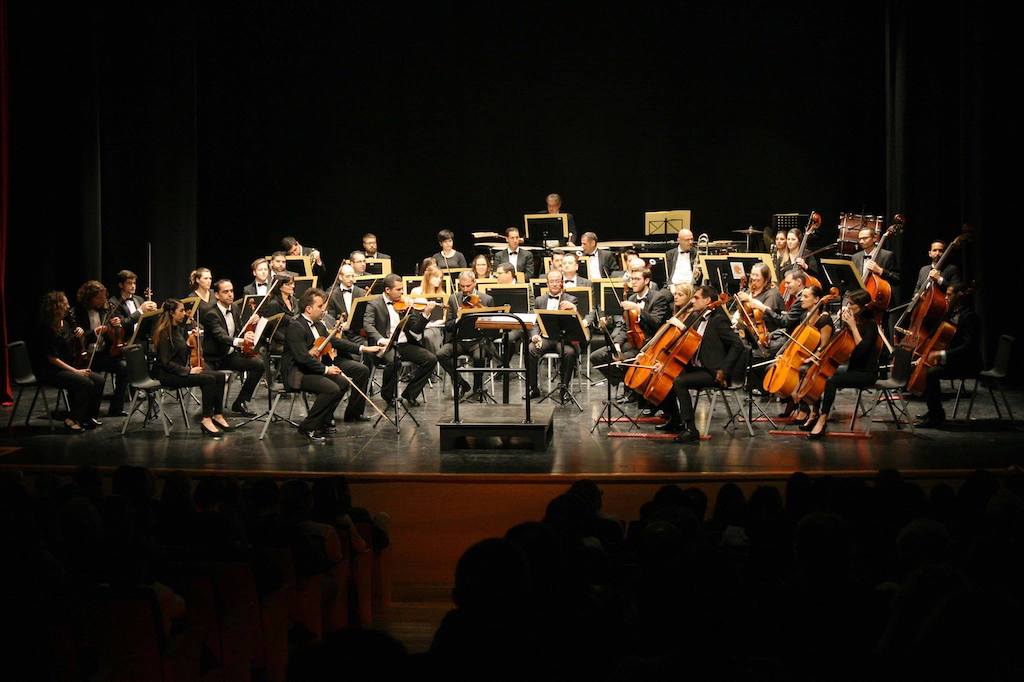 Almudena Hernandez, Moneiba Hidalgo, Marieme Abdouyale and Dunia Santana are the owners of the four powerful voices to chosen to represent the Canarian music scene, by joining the The Las Palmas Symphony Orchestra in a great music stage show, much enjoyed by members of the general public in a packed house at Teatro San Bartolme on Lanzarote on Saturday May 14th 2022.

SinfonicAs, the new show created by the Las Palmas Symphony Orchestra, arrived on the island following the great successes of four great performances on Gran Canarias. This original musical stage show offered styles as disparate as the soul sounds of Aretha Franklin and Nina Simone and the fiery Salsa sounds made famous by Celia Cruz.

The four leading ladies certainly served as the soul of the orchestra when performing as either a soloist, or one of the duet permutations (as on a wonderful delivery of The First Time Ever I Saw His Face, the gorgeous folk song by the late British writer Ewan McColl)  or as a quartet. Throughout the evening they took us on an exciting journey through the legacy of the great female icons of the last century.

The four singers represented women who were not only part of recent female music history but who also remain in the collective memory.

The orchestra had been specially selected for this event and they accompanied and carried the four singers through a masterpiece accomplished by the stage direction of Nacho Cabrera and by musical director Luis Montesdeaco, and by the arrangements of the composers, Eduardo Perrinos, Manuel Estupinnon, Carlos Vega and Josea Santana.

This performance saw the four female vocalists sharing a stage for the first time, and they did so with aplomb and panache and, it seemed a massive mutual admiration and generosity. For each of them it was also the first time they had performed with a live orchestra.

´Singing with a live orchestra is a unique experience of many good things. I feel most blessed to be part of a project as wonderful as this one,¨ the audience was told by Mariem Abdouyale, the Mauritainan artist now living in The Canary Islands, Her ethnic origin certainly contributed much to the Latin American section, in which she grrrrowled in a way that had me in mind of Eartha Kitt. In the past couple of years Mariem has starred as a soloist in the musical of the life of Cesar Manrique, A year later, in 2019, she performed at the opening ceremony of the Carnival of Las Palmas de Gran Canaria.

For her part, Almudena Hernandez, from Lanzarote, closely identified with her own Sinfonica repetoire.

´My songs are of artists I have always admired,´ she said from the stage. ´Singers like Pastara Soler, Roccia Durcal and Roccia and Roccia Jurrado´.

Almudena is still very young but her awareness of the lineage of music, and her own incredible performance on this stage, augers well for her future. She launched her professional career in 2004 after taking music studies with soprano Mercedes Aleman and later with Felipe Forrestiere in Madrid. She has participated in several musical festivals and competitions and in 2017 she won the second edition of tv talent show A cappella. She is currently a member of the Elysian Musical Group, continuing, in parallel, her career as a soloist. Here, tonight, she certainly displayed her great versatility.

The soul element of tonight´s show was most delivered by Monieba Hidalgo from The Canary Iislands. Though we could also detect jazz jives, blues mood, rock and reggae they never detracted from the soulful understanding of the music that poured out of her. No wonder she is currently collaborating on various musical projects, including Big Band Music looking at major female jazz artists and a didactic project with the female band B Jazz, Tonight she named her main influences as Aretha Franklin, Lauryn Hill (that earned her a big tick from me), Nina Simone, Witney Houston,  and Dee Dee Bridgewater (big tick number 2).

Here’s a video of them performing:

The last, but never the least, of the four females starring in tonight´s show was Dunia Sanata who is an eloquent defender of the female presence in the music industry.

´I especially value this show,´ she told us, ´because I firmly believe we need female references in music¨.

She began her own professional career at the tender age of fifteen and since then has played across mainland Spain and its diaspora, taking the lead in several shows.

All four singers, with already successful careers, enhanced their reputations here with a collaborative success filled with highlights, (and I can really only point out the songs performed in English). My lack of Spanish language leaves me floundering to hum along with a tune I know I know but I cannot title even as I fumble with what the Spanish lines I am hearing might mean. I´m pretty sure I knew and recognised every song here tonight, but I will just point out a few of the best of the English.

We have friends here from the UK at the moment in radio jazz presenter Steve Bewick and his wife Marlene. Mrs. Bewick particularly enjoyed a duet performance of The First Time Ever I Saw Your Face. In a show that had four female singers who were sexy and sassy and an orchestra that was swinging there was a great deal to enjoy but I found myself sing along (far too loudly) to Man, I Feel Like A Woman Tonight, the hit by country star Shania Twain. That my wife was next to me, and then sang along just as loudly to Gloria Gaynor´s anthemic I Will Survive must surely only have been a coincidence !

Steve opted for the Latin American section, where perhaps just a few hints of jazz, could be detected.

We discussed all this over late night meal half a mile from the theatre, who serve an excellent array of thin and crispy pizza, good house wine and cold beer. Other titles came up like I Say Little Prayer For You and I´m Feeling Good by Nina Simone. Simply The Best and a cover of Halo by Beyonce, and a segue tribute to the great Gloria Estefan were also regularly mentioned.

Marlene and Steve had been surprised at the energy and involvement of the audience who offered hand-clapped rhythmic csupport throughout and rose as one at the end to bring orchestra and vocalists back for a well deserved deserved encore.

On the way back down to the south of the island, Steve made some professional comments about the fact that the orchestra was accomplished rather than adventurous and that whoever was operating a major spotlight from the stage seemed to have focussed it on the four seats we were occupying, almost blinding us on several occasions,……..but the talk through the darkness of the drive was about the large, comfy seating, the cleanliness of the theatre and professionalism of the staff, We spoke of the song selection, of how the girls worked so well together and apart, and of the fun of the whole event. And almost every sentence was ended with the suffix of ´and it was only ten euros !!!´