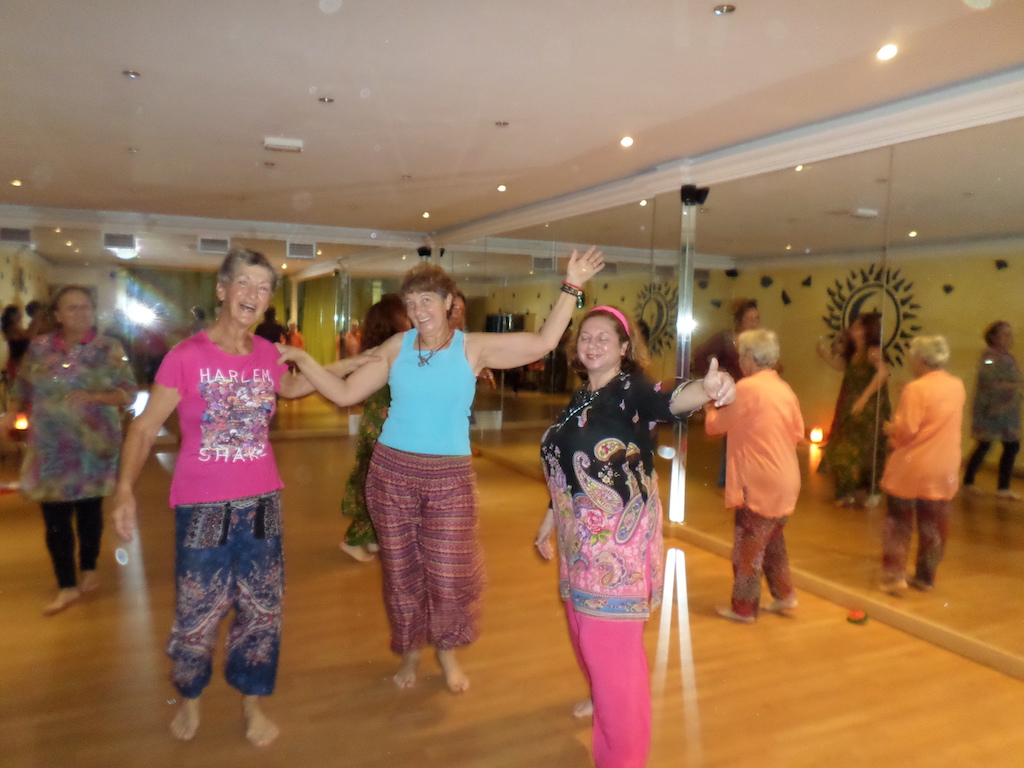 The best decision we ever made when we came to live on Lanzarote was to integrate as quickly as possible into the way of life over here. My wife, Dee, joined a yoga group in Playa Blanca. For two mornings a week she enjoys two hours of the peace and tranquillity of yoga, although not nearly as much as I enjoy the peace and tranquillity of two mornings a week to myself.

Having dropped her at the door of the studios I suddenly find myself, twice a week, with the freedom, peace and tranquillity to buy a newspaper, set up my chair anywhere with a panoramic view and read, and gaze, and snooze and read in absolutely undisturbed bliss. Without her yoga group, I have no doubt one of us would be living back in the UK by now.

Her yoga classes were delivered until recently by Daniella Scimonelli who is now concentrating on delivering sessions dedicated to Shakti Dance.

She is of Italian descent and, with her bright smile and sparkling eyes, looks the epitome of good health. This, says Daniela Scimonelli, is because she incorporates the mantra of Yoga and Shakti Dance into her life-style. In fact, for several years she has practiced what she teaches. She now delivers two Shakti sessions per week at Calle Ek Varedero 11, Shopping Centre Yaiza, Playa Blanca.

I first met Daniela, a couple of years ago, on a day when her students, a multi-national combination of ladies, of whom my wife is one, have been making a video, (since made available on You Tube) to espouse the virtues of Shakti Dance and to attract new members.

Shakti is a dance, developed since 1990 by kundalini yoga trainer Sara Avtar Olivier, that unfolds spontaneously. Daniela believes the landscape and lifestyle of Lanzarote perfectly complement a following of what she says is “the yoga of dance”.
By adopting the aims of both yoga and Shakti, Daniela is enabling her students to enjoy the intuitive flow of dance with the ancient wisdom of yoga.

Typically a class is woven around a compilation of mantric music of different styles and tempos. The body is gently stretched and deeply relaxed before a session of free dance leads into a seated or standing meditation.

Shakti is actually a Sanskrit word describing the force that animates all life, though Daniela speaks more plainly of how “Shakti takes you out of your head and gets you into your body.”

As we discuss this ancient Eastern culture Daniela is speaking in Italian and I in English with a student who described herself as Spanish / Irish, serving as interpreter. Whilst many words may still have been lost in translation Daniela’s enthusiasm for the disciplines and freedoms of yoga and Shakti came through loud and clear.

She has seen so many of her students enjoy physical and mental health through following the philosophy of Yoga and Shakti that she feels the teaching of this unique combined approach to well-being could even be started in schools. In fact, so strong is her faith in it all that she has adapted the Indian name of Japjeet Kaur, which means Victory Over Adversity, a description of her life she says, and perhaps, of how Lanzarote has re-built itself since the volcanic eruptions of the eighteenth century.

The yoga classes Daniela has presided over for several years have recently moved to a new venue and are being tun by her colleague by Mercedes Rodrigez, who currently runs workshops in Tahiche, and at C/El Corrreillo, 50 local 7, Playa Blanca.

Dee and I can in fact enjoy peace and tranquillity together, of course, and we love to visit the scores of art quiet, but often exciting art galleries we have on the island.

I have been reminded, by one or two recent events I have reviewed on these pages, of Touchstones Arts And Heritage Centre in Rochdale in the UK. A conversion of a former library, this building, on the spot where thirteen men first envisaged a co-operative movement that swept the world, became a gallery that collected some of the world’s great visual arts and at the same time heralded the town’s own painters, potters, drummers, dancers, poets and playwrites.

Whenever a new exhibition was opened, and its curators presented some wonderful displays, the staff would utilise the talents of local circus acts, dance troupes and choirs to deliver ad hoc performances to complement the event. I was once very privileged to curate an exhibition there and was given access to the town’s huge treasure chest of arts and archives to do so. My partner Pam McKee and I, (we called ourselves Just Poets) employed portraits and invited school children to invent poetic conversation between their subjects. Thus we had Gracie Fields talking to Paul Robeson and had Lord Byron and Mike Harding exchanging disparate brands of Romantic poetry.

It has become very apparent in our time here that Lanzarote similarly celebrates both elevated art and local and community arts as being equally important and so we have brought you recent articles on mermaids performing outside a theatre whilst a rock band played inside, and choirs performing whilst a local historian of some renown was being officially recognised for his contribution in creating written documentation of 20th and 21st century Yaiza.

The island of Lanzarote and my hometown of Rochdale are not dis-similar in area and capita and it is interesting that, like the Lancashire town, Lanzarote is not afraid to present challenging art that comes slightly from left field.

The Cin El Alemacon in Arrecife recently housed a very small exhibition, Conjuciones, by Carlos Matallana. He creates hues, rather than mere colours, and the subject matter of his work is never quite as it first appears. He bends and re-shapes the rules of painting as he uses his work to explore cultural conventions and how they have been formed and how they are today employed.

Carlos is the nephew of the island’s most celebrated artist, Cesar Manrique, and remembers the vitality and modernity of his uncle at the time when Manrique, invariably in his checkered shorts and accompanied by his Siamese cat Gastruto, was completing the Jameos del Agua project. Matallana admits to being influenced personally and artistically by the great man, and shares his late uncle’s love for life and art.

He has made a name for himself, though, in his own style. His work might have something of Salvador Dali, though he does more than re-shape to simply shock. Matallana’s work actually slightly reminds me of a famous and successful twentieth century American artist called Robert Ives Hunter who also employed triptychs and apparent disconnects when refiguring The Hounds Of Heaven, a poem of the seventeen hundreds, by English poet Francis Thompson, into several visual artworks.

When we look at Matallana’s work we are almost forced to reconsider what we believe to be realistic, or what we view as realism. He paints from photographs, so two layers of mediation have already been undergone before we view a subject through his eyes.

There was a superb phrase in the accompanying pamphlet to the exhibition. It is possible to take out of context a few words from a piece written by Ramino Carillo, …’realism ultimately lies,’ we are told.

You don’t have to look that deeply, nor take your art that seriously, but if you are a holiday visitor or a new resident to the island from the UK or Europe you can pretty much trust that any local gallery space you pop in to, whether it be in the major arenas or one of the side street galleries in Arrecife, will reward your interest. So, too, will towns like Yaiza, Tinajo and even the works on the walls of some of the restaurants away from the resort areas bear a second examination.

Lanzarote is a way of life full of colour and thanksgiving for our lot, and its art work tends to reflect this.