Sailing Ahead, Looking Back 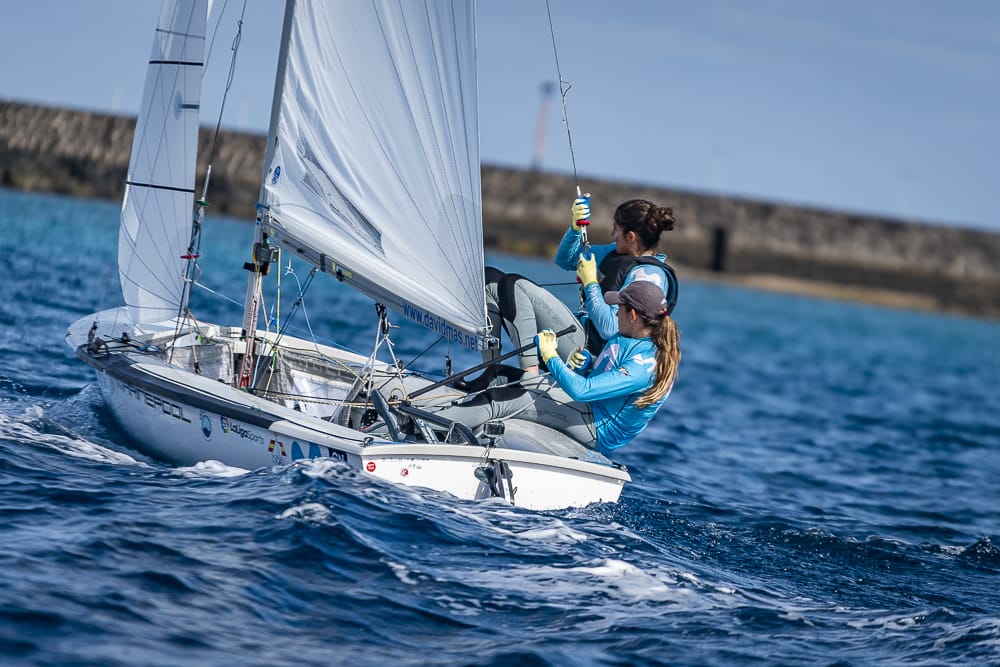 Despite the current dreaded-lurgi lockdowns, six o´clock shutdowns and bored-out-of-our-minds breakdowns, we have spent the last few weeks watching glorious red sails in the sunset as catamarans have been cutting through the waves out at sea, just off Playa Blanca. The young guys and girls spend as long preparing and maintaining these boats as they do sailing them, but its all very competitive. So, come follow your art between the sails and the mainbrace or whatever the nautical terms are. You might find we are sailing not against time or fellow sailors but sailing back to a time only our older readers might remember.

When Asunción González Verduras turned one hundred recently it seemed all of Lanzarote commemorated the centenary of her birth. Local papers and glossy monthlies were all talking about her, and rightly so.

Doña Asunción, a natural of León, is the youngest of four siblings. Her father was the clerk and her mother, the village teacher, instilled in her a love of teaching. From the tender age of ten, her mother allowed Ascuncion to ´help´ to teach her more than eighty students, on the Banks of Vegas County. Ascuncion studied high school in León.

She became a Teacher in 1945, and carried out internships near Riaño, in León, obtaining her first post in Portilla de la Reina, in the Picos de Europa, from which she subsequently move to live in Vigo, before finally arriving in Lanzarote to practice for many years in the educational center known as El Grupo, the Generalísimo Franco, the current La Destila, in Arrecife , where the palm tree you planted on arrival, on the corner of Goblin Street, can still be seen in the same place.

In addition, being a diligent teacher, she was also a close teacher, and the pioneer in Arrecife in making trips with students, inaugurating this initiative with a magnificent, and unexpected journey for many, to La Palma.

Not only did she travel around the islands, but also to what were at the times, distant destinations like Galicia or Ceuta, with many of the young peop`le making their first vistis to such places.

She was widowed in 1962, but was very well received by the Lanzaroteño society of which she considers herself an adopted daughter. Two of her three sons remain settled on the island.

In 1969 she was elected ´ideal teacher and woman´ represented in the Canary Islands. ´I went to the national phase in Madrid, there I met the then princes of Spain, Juan Carlos and Sofia, also the authorities of the time, the coordinators of the contest were Covadonga O’Shea and Manolo Martín Ferran. It was a recognition of the teachers, very organized, of high standig as it is said now,´ says the teacher

She was always a socially very active person, organizedsing basket and bridge championships and participating in them, and continuing this activity even now..

A lady who didn´t quite make the mafic century mark, though, was Dolores de Quintana Sáenz, better known on the island as Doña Lola, who died recently in own home at the age of 92. The funeral of Doña Lola took place at Arrecife Cemetery, when sadly, due to covid restrictions, only 25 people were allowed to to attend.

Doña Lola, widow of the well-known reef doctor Pancho Perdomo Spínola, had with her husband six children, five women and a male, the also known Pancho Perdomo de Quintana, for many years secretary of the Cabildo de Lanzarote.

Those who did so mourned her loss but celebrated her life as a great-great-grandmother who had ten great-grandchildren and 16 grandchildren, some of them as well known as opera singer Pancho Corujo, on whom we have reported many times in our arts reviews here on Lanzarote Information. We send our consolscences.

There is no doubt that that Dona Lola and Asunción González Verduras must have spent much of their time absolutely amazed by the changes to Lanzarote over the past half a century. Over the last five years, since coming to live here, we have often gasped aloud when we look around a bar or restaurant and see photogrpahs of seeareas and street that we have come to know as busy and bustinglin, show as desserted of not only people but also of any man-made constructions. It is difficutl for those of who know lanzarote as a place of busy towns and beautiful villages packed out with tourists enjoying a life-style that once must have been iompoosible for the two ladies to even dream of.

Now, of course with all of us in a tier four lockdown, the island might feel as émpty´as it was a hundred years ago, with most of the man-made buldings of the last fifty years such as hotels, gyms etc all standing empty.

And yet the modern phenomenon that is global competittive sport has provided a compensation of sorts so far in 2021.

Athletes from more than thirty countries are currently participating in the first edition of the ‘Lanzarote Olympic Winter Regatta.’ This involves more than 230 Olympic sailors, and they all seem to be staying here in Playa Blanca where they have facilities to store their craft. They are here from a total of 34 countries to take advantage of the weather conditions and the infrastructures that Lanzarote offers to train these days.

In the coming weeks those already training here will be joined by even more athletes choosing Lanzarote to prepare for the next Olympic Games in Tokyo. The Cabildo (island government) is making them very welcome seeing this as a sign of ´the consolidation of the island as one of the favourite destinations for nautical athletes to train in winter´.

The president of the Cabildo, María Dolores Corujo , has emphasized the importance of nautical tourism for the economy and image of the island, especially in the current moment of uncertainty.

´Although the tourism sector is suffering the serious consequences of the pandemic, sailors continue to opt for Lanzarote as a destination to train, valuing both the climate and the quality of the accommodation facilities offered by the island.

As a good example of this, there are more than 80 villas that this group is currently occupying, whilst also contributing to the reactivation of an area so important for Lanzarote ´.

Within the framework of the first edition of the Lanzarote Olympic Winter Regatta, lending time trials and competitive events and the recording of statistics etc and organized by the Real Club Náutico de Arrecife and Marina Rubicón, the athletes are staying in Lanzarote in order to maintain their preparation for the next Olympic Games in Tokyo.

The organisers of the competition point out that, despite the tragedy that the current global health crisis undoubtedly presentys, this eventt has nevertheless attracted, safely, all these athletes to the island, allowing the launch of this inaugural international championship for the first time.

The athletes themselves point to the state-of-the-art infrastructures for water sports here on the island and the short distances between different parts of the island and sea conditions as well as favourable weather during winter. That, and the ´safety´ of this destination, is the main reasons they have chosen Lanzarote for the development of their fitness.

The athletes have given a much needed lift to the island by their very presence. They store and maintain their crafts down at Marina Rubicon, a place my wife and I wander around every day. We hear cheerful chatter, and a determination in the young athletes to communicate with each other and break down language barriers.

There is much banter but they have all been impeccably behaved. When we have lunch at Lani´s Snack Bar we hear high spirited teasing about results, mistakes, the state of the water, the speed of the wind and the luck of the draw.

The staff at Lani´s, who are all good-fun people, engage with the athletes by asking about results, mishaps and life in their home countries.

The marina over the past months has seemed moribund with yachts, owned by rich people and worth many thousands of pounds, bobbing gently but forlornly in a beautiful harbour and wondering if or when they will ever be sea-going again.

Meanwhile the much smaller sailing vessels of these young athletes have raced at unbelievable speeds, and woven intricate, colourful patterns over the waves, striving for every tight turn, every gust of wind and every strong current. There has been a bustle on the harbour walk as boats return from their classes and are seemingly dismantled into small pieces, checked and cleaned and tucked away until tomorrow. Teenagers and twenty odd year olds from all over the world work together in co-operation even whilst in competition and all we see are smiling faces and all we hear is the sound of fun and laughter, …..

It is almost as if, with our arts under lockdown, life is imitating Art to keep the island colourful and entertaining.