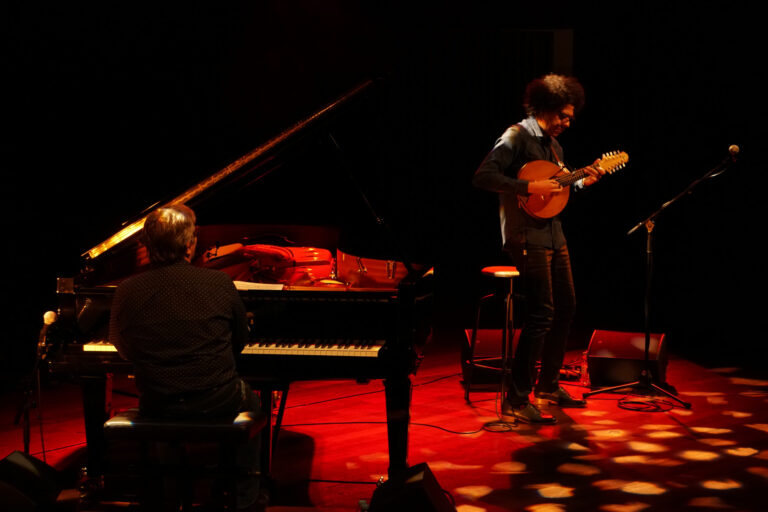 The Chano Dominguez and Hamilton project in the Netherlands is a fascinating and captivating encounter between different cultures, musical styles and artistic virtuosity. The great Spanish jazz pianist and the brilliant Brazilian mandolinist delivered a brilliant mix of jazz, flamenco and bossa nova during a recent concert at Teatro El Salinero in Arrecife, and we were privileged to have been there. So come follow your art down the sidetracks & detours of unusual integrations.

Pianist Chano Dominguez is one of the most celebrated jazz musicians “recruited” by flamenco who has achieved an unusual integration between rhythms and languages of jazz and flamenco. He is one of the most in-demand musicians of the Spanish music scene, in any of his musical genres. He has worked with a wide range of artists, including Enrique Morente, Estrella Morente, Martirio, Marta Valdés, Gonzalo Rubalcaba, Ana Belén, Jorge Pardo, Carles Benavent, Paco de Lucía, Joe Lovano, Herbie Hancock, Jack DeJohnette and Wynton Marsalis with the Lincoln Center Jazz Orchestra. In 2016 he was nominated for the Latin Grammys for the release of Bendito, where he appears as producer, composer and pianist for his usual “cantaor” Blas Córdoba AKA “El Kejio”.

Hamilton of the Netherlands is a transgressor of the instrument (a 10-string mandolin) and creator of a revolutionary technique. The American press has dubbed him the “Jimmy Hendrix of mandolin”, the French as “Prince of mandolin” and the Brazilian as the “king”. Virtuoso, brilliant and unique are some of the usual adjectives in the life of the musician who has built a career with several awards to his credit through music centered on beauty and spontaneity. Figures such as Hermeto Pascoal, Maria Bethania, Djavan, Ivan Lins and Joao Bosco consider him “one of the best musicians in the world”. In 2007 he was nominated for the Latin Grammy for Best Instrumental Album for Brazilians with his group Hamilton of Holland Quintet, and in 2016 he won the Latin Grammy in the Jazz section with his project Samba de Chico.

Teatro El Salinero may not yet be allowed to work to full capacity, but reflected increasing optimism by allowing the sales of 150 tickets for socially distanced seats, spread throughout what looks a huge and sprawling theatre when as sparsely populated as this.

What this sell-out audience lacked in numbers, however, it more than made up for in vibrant support of these two incredible artists.

The queue outside had observed the distance markers on the pavement and had co-operated well with the ever patient and courteous front of house staff and medical practitioners who are undertaking work that was surely never on their original job description. It was disappointing then that, after being so impressed by the entry system of id checks, sanitisers and temperature-taking, all quickly and discretely delivered, to find two women in front of us surreptitiously remove a not-to-be-used notice off two seats so they could sit together. I attach no blame to the staff for this, who were certainly paying due diligence, and I´m sure the two women did not realise the seriousness of the transgression, but if the arts are to continue their own return to full health then it is vital that we are all able to trust each other. These two ladies broke that trust and left my wife and I and others around them feel uncomfortable.

None of this distracted one iota from the incredible music we heard. The two instruments were ones I never thought I would see in the shaded area of a Venn diagram showing instruments that make beautiful sounds together, Here, tonight, the piano and the mandolin not only made beautiful sounds, but they did so by use of gorgeous musical harmonies by two artists in complete empathy. Their mutual respect was evident by the beatific smiles on their faces as they created subtle and often syncopated rhythms, exquisite melodies, and occasional counterpoints.

An audience of 150 people in a fairly provincial theatre in a relatively small city on a tiny island, devoid even of its usual tourist quota, witnessed a performance by two world-class musicians and rose to their feet at the end for a long-held standing ovation that brought the performers back for a fully deserved encore.

Chano Dominguez has all the softness and sophistication and the powerful playing of a great concert pianist, and once tonight he even vamped a few bars like Elton John telling us that Saturday Night´s Alright For Fighting. Even seen only with his back to us for most of the time, he radiated charisma of man and music in perfect synchronicity.

Hamilton´s style on his instrument reminded me of Jethro Burns, an American mandolinist who played and recorded with the late, great Steve Goodman (look up a You Tube of them performing, (with serendipity at work again), The Dutchman, written by Michael Smith).

Hamilton created percussive rhythm with some occasional foot-tapping, but for the most he picked and strummed his instrument as he pulled at the strings of our hearts. Twice he gently, almost shyly, took to vocalisations with a soft pleasant voice. One of these songs led to one of these spine-tingling, I was there moments that we occasionally get at the great concerts. He had lah lah lahed his way through a finger-clicking accompanied chorus of what was a clearly improvised song and teasingly invited an audience call and response. To his, and perhaps even our own, surprise, he got one ! The one hundred and fifty audience returned in kind, not only with the finger-picking but also with lulling vocals and created something akin to the muted tones of a Hoagy Carmichael song. He honestly almost staggered back in amazement that an audience had collectively improvised to his own improvisation.

At one point in what was effectively a wonderful jazz concert, Chano took his fingers off the ebony and ivory notes on the keyboard and instead reached under the hood of the piano to pluck at the strings. This reminded us of the avant garde work of Pablo and Humberto at other concerts we have reported on for these pages.

Sadly, covid rules don´t facilitate any album sales after concerts these days but we would surely have bought one had it been available.

This had been a musical journey that had taken us from tradition, through improvisation, to modernity. Chano Dominguez from Spain and Hamilton de Holand from Brazil led us through their home areas of Flamenco and Brazilian music into a bright new world of jazz fusion. They are each a master of their instruments and Chano´s piano embodied the electric flamenco passion whilst Hamilton´s ten string mandolin delivered Brazilian rhythms. They paid tribute, at one point, to Paco De Lucia which brought a massive round of applause and even shouts of gracias from the audience.
These two men sharing the stage tonight, had previously shared a stage with the likes of not only Paco de Lucia but also Wynton Marsalis, Chick Correa, Chuch Valdes and even Dave Mathews of the Blues Band fame.

It all gave us much to talk about as Dee and I settled down at the Mia bar in Playa Blanca on the way home. Over a beer and a white wine we looked out into the black holes of a dark night in a town that has been pretty depleted over the last year or so, but tonight, with news from the UK and having seen a Lanzarote concert, live, we had reason for optimism.

The lights will be on again soon.