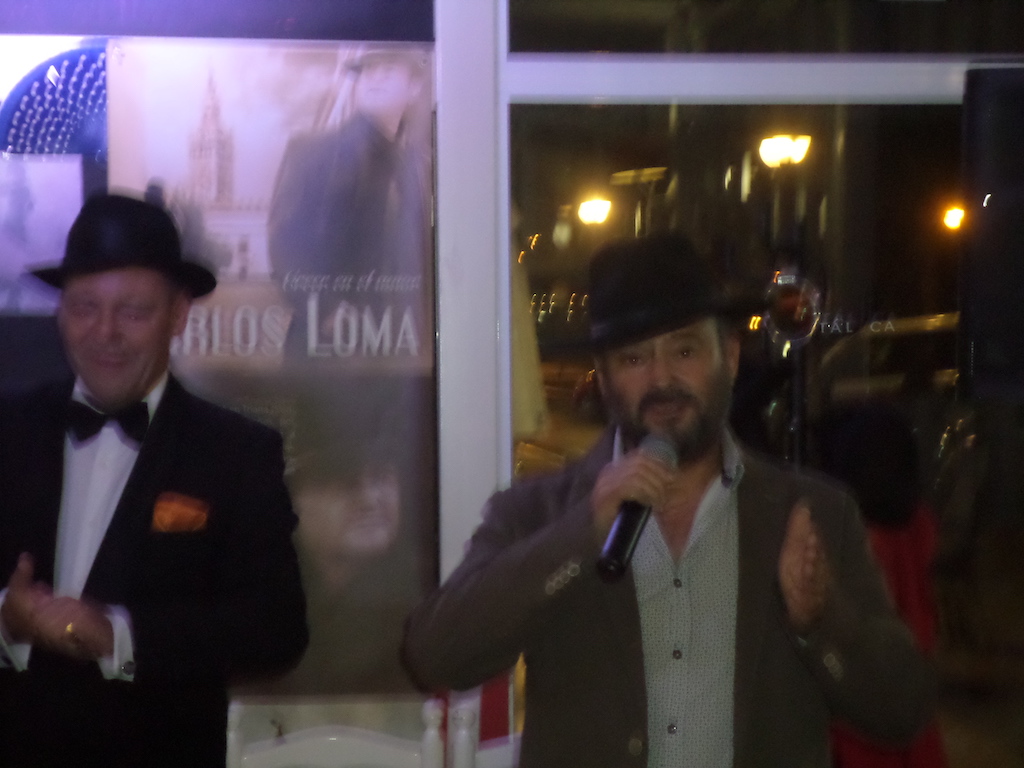 Their material is still loved by generations who never saw The Rat Pack perform either live or on tv, and here in this restaurant, by the beach at Matagorda, a brief moment in time is captured every Wednesday evening as audiences listen to ´Sinatra´ slurring Set Ém Up Joe, see ´Sammy´ singing for his supper and soft shoe shuffling and hear ´Deano´ declaring of a big pizza pie, ´That’s Amore.´

The venue itself has a distinct Italian flavour and an obvious musical identity with the walls adorned by photographs and paintings of musicians: some, famous international stars and some anonymous but all representative figures of Italian music. Tonight the front windows were closed against a night that was chilly by Lanzarote’s standards but when measured against news reports of snowy conditions in the UK, still seemed positively equatorial. Nevertheless, our friends politely requested that we move further indoors from the table that had been reserved for us and the staff immediately beckoned us to follow as they quickly pushed two tables for couples in to one table for four, and presented us with our menus.

This was wide ranging in all things Italian from pizza and pasta to pescado and carne. Because we normally eat here around mid-day on a Monday, as we go to shop at Lidl about a mile away from the Matagorda front, we have not previously studied the full menu. Being creatures of habit we have stuck for months now with my scrambled eggs on toast, followed by the most delicious apple cake and ice cream and Dee has a spinach and chickpea Tapa and we each have a bottle of water.

Tonight, with more time, I ordered the goat’s cheese, quince and walnut starter and a well-done solomillo. With a pint of beer and a couple of bottles of wine, this was living the dolce vita so whilst I always welcome readers to these pages, I hope my doctor is not a subscriber to Lanzarote Information. Our other starters included sardines and the main meals were another steak, grilled chicken, and a cherne fish meal. My steak was perfect for me and the potatoes and vegetables tasty and fresh.

Throughout the various courses the four of us chatted away to catch up on all the news we had of arts and culture on the island. We wondered what might come of The Cabildo of Lanzarote meeting with its local councils to agree on acts of commemoration of the centenary of the birth of César Manrique. I’d be very interested in working with local schools on creative writing workshops about the great man, in much way I used to visit schools in England to help them celebrate L.S. Lowry and Gracie Fields in the North West.

We know the owners and staff at this family run restaurant pretty well now and it was lovely that during the meal the young son Jorge and his good lady came over and said hello, as did both Jorge’s parents. Two other staff members serving the food were charming and polite and good fun and then, when the music began, they left us to enjoy our meals and enjoy the show.

Even with my love of Rat Pack music I wasn’t quite sure what to expect, and when Roy and Beth told us they had seen a fantastic Rat Pack revue in Las Vegas a few years ago I wondered whether tonight’s show could live up to any of our expectations.

The first surprise was that there were not three rat packers, nor even two, but instead there was one quick-change artist playing Frank and Deano making the odd reference to an absent Sammy. He very wisely sang pretty much the songs we would expect from the two artists and his Sinatra was excellent.

He didn’t try to recreate the voice, (who could?) but instead captured much of the wonderful phrasing of Old Blue Eyes on songs like Ain’t That A Kick In The Head, Fly Me To The Moon, and of course My Way. In his dinner suit he played the room, wandering round the tables as he sang, glad-handing many of our fellow diners.

Somehow he seemed to change outfits before our very eyes, instantly becoming Dean Martin in a red ´Butlins´ style jacket and here we had Little Old Wine Drinker Me and That’s Amore amongst plenty of others before he was joined by Carlos Lemo, the alter-ego of the restaurant owner who is pictured prominently, with an intriguing biography, on the ´wall of fame´ of the little stage area.

This charming, polite and seemingly reserved man who so often serves us with our food on a Monday becomes a suave and confident performer with a great voice on stage and he and Mr. Rat Pack’s one man band performed a number of duets, before Carlos took on a short solo set.

Some of the audience had even come in period dress and at this stage of the evening didn’t take too much persuasion to get up and dance. In fact even we got up to dance, with our friend Beth turning herself almost inside out in a lively performance of La Bamba.

At the end of the night, after our complimentary honey rum drink and lots of hugs and kisses and handshakes, we stepped back out into the real world, beneath a cloudy, moonless sky, and strolled along the front, looking out to sea and searching for the bioluminescent waves we used to see breaking on this shoreline that had so amazed us on previous holidays. Perhaps it, too, needed a moon-shadow to follow it home and show it in its true-blue colours, so we wandered along to the bend in the bay where we turned round and headed back to the car. On the way, we came across the remnants of a ´cabaret´ in another bar, and watched and listened from outside as Elvis, in a tight white suit with an Eric Cantona collar, belted out The Wonder of You.
I was reminded of a caustic and derisory song by the late, great Steve Goodman, all about Elvis Imitators, and was glad we had chosen a slightly less reverential performance by The King Rat who, even without his pack, had given a fair reflection of the men I consider to be the Holy Trinity of their era.

Before settling into its most familiar line-up, the cabaret phenomenon dubbed by the media as The Rat Pack was a quite volatile cocktail of leaders, members and associates. Although nobody in the group so titled by the press actually referred to the ´club´ in that way it was a group to which many aspired.

The Rat Pack first emerged in the nineteen fifties and was a name applied to those who regularly partied at the home of Hollywood stars Humphrey Bogart and Lauren Bacall. Indeed the term Rat Pack was reportedly first used by Bacall when seeing her husband and drinking buddies return home looking the worse for wear. Regular names on those early guest lists included Errol Flynn, Nat King Cole, Tony Curtis and Lena Horne, but the Rat Pack epithet became more firmly attached to an evolved clientele.

The next metamorphoses included the likes of Judy Garland, David Niven, Katharine Hepburn, Spencer Tracy and Rex Harrison. However, by the nineteen sixties the Rat Pack names most identifiable to the public had become Frank Sinatra, Dean Martin and Sammy Davis Junior, with the likes of Joey Bishop, Peter Lawford, Marilyn Monroe and Shirley MacLaine also often being in attendance at reportedly hedonistic ´pack parties.´. Allegations that Sinatra’s gambling had seen ties established with mafia members led to a distancing of himself by Peter Lawford who was, after all, brother in law of President JFK.

Cabaret appearances, whether ensemble or individual, in either nightclubs or casinos, would see a city being flooded by fans and ´high rollers´ and, to further encourage this, signs for an individual gig would be posted as, for example, ´Frank Sinatra and maybe Dean and maybe Sammy.´
Such advertising could be justified by the fact that members of the Rat Pack would often turn up to shows to support a solo spot by another member. Nevertheless there was only one closed circuit tv recording made of a Rat Pack performance on which the names of Sinatra, Martin and Davis were announced as performers.

It was only several years later, in 1981, that the three appeared in a film together, with Shirley Maclaine also appearing, in the instantly disposable Cannonball Run 2.

A subsequent series of later live dates saw Martin withdraw early into the itinerary, to be replaced by Liza Minelli, on a tour that was then re-named The Ultimate Event.

In August 1989, after Davis experienced throat pain, he was diagnosed with throat cancer which caused his death in May 1990 and he was buried with a gold watch that Sinatra had given him at the conclusion of The Ultimate Event Tour.

The Rat Pack and those who ran with them were always, and are so still today, referred to in the press as having a reputation for ´womanizing and heavy drinking´ but Joey Bishop later asserted in a media interview that he never saw Frank, Dean, Sammy (or Peter Lawford) drunk during a performance. ´That was only a gag!´ he stated, ´and do you really believe these guys ever had to chase broads? They had to chase them away.´

Public fascination with the seedier aspects of The Rat Pack reputation should not detract from the seemingly shambolic genius the pack members wore so lightly. Broadway and West End shows re-telling their story have enjoyed huge success in the twenty first century, and there are tribute acts playing in their name all over the world.

It might seem a long way from Los Angeles to Lanzarote, and a few steps from Sinatra, Martin and Davis to a tribute act playing them currently in cabaret style act at The Italica Restaurant in Matagorda, but as my old friend Hugh Moffatt said in a phrase I have used on these pages many times,…´we must intend what we write for light years of travel´. It is not only the performances by The Rat Pack that have somehow been mythologised and have become the stuff of legend, but also the great songs (and, too, many of the jokes and one liners) that have, too, endured.

Tonight a one-man act, presented a little tribute act in a small restaurant on this tiny island and had given his audience a fun evening of musicality and entertainment. He had dared To Dream The Impossible Dream that one man could play the parts of three genius entertainers, and his dream had come true.