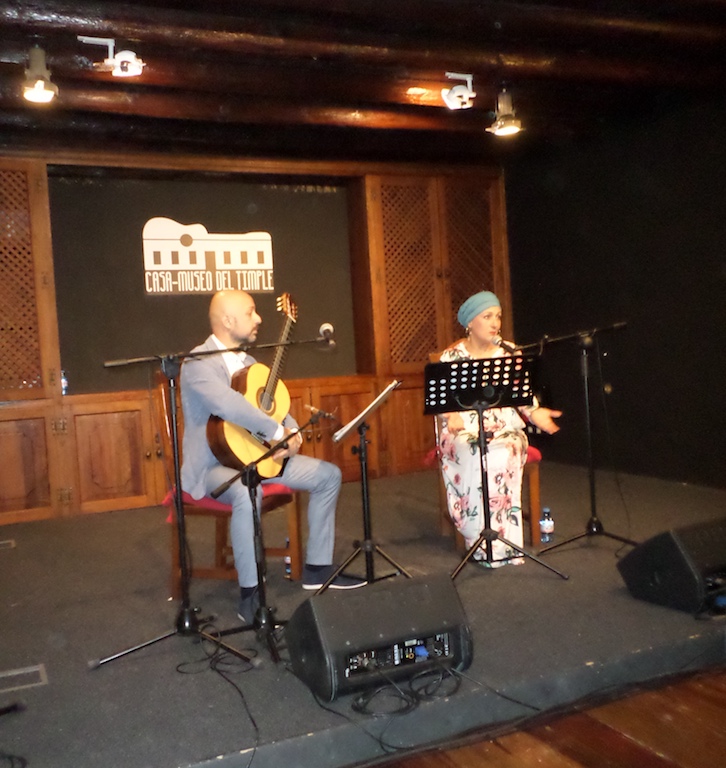 Music In The Museum

In all the arts and cultural events we have covered since arriving on the island very nearly three years ago now, we have not, until now, actually seen a male and female guitar and vocal twosome. So, we arrived early (regular readers will know we tend to do that) in Teguise for the concert to be performed by Alondra Duo. The advertising flier we had seen showed Francisco Yanes in troubadour attire and strumming his acoustic Spanish guitar, and his colleague Candelaria Gonzales, long hair down and casually dressed, resting her head on his shoulders. This photograph suggested to me a young, folksy duo, probably singing contemporary material and there was nothing in any accompanying text to dissuade me of that notion.

With the concert due to start at 9.00 pm we arrived at Casa museo del Timple, Palacia Spinola, Villa De Teguise at 7.00 pm., as we hadn’t been able to purchase tickets in advance. We have attended previous sell out gigs in this historic venue, and have been seated in extra rows hastily put at the back of the room, actually in the hall, as the audience kept pouring in, so we were determined to purchase tickets and take our seats as early as possible.

However, the town square on this lovely evening was totally deserted. The fountain was gurgling away, and the clock tower chimed sonorously from time to time, but movement was there none. Even the doors at the reception area of the venue were closed and locked. So we wandered around town for a while and came back to the square a little later. There were signs of activity in that two people, who from a distance resembled the musicians on the adverts, (with the guitar case being a bit of a give-away) were knocking at the door trying to get in. Obviously, it would be some time before tickets would be made available so we set off looking for a place to eat.

We came across El Patio, a wonderful, tucked away down a side street little venue that we can never find when we are looking for it, but that, like tonight, we often stumble over when we are lost.

The Author gatecrashing the poetry party.

We have seen some fantastic al fresco musical performances there, including, ten years or so ago when here on holiday, one of the most impressive gigs I have ever seen, by Un Poco Mas. I purchased their Mas Que Son funk-jazz album that night, and it has become one of the most played in my collection.

This, strange enchanting little venue sells crepes, salads and desserts to tables that spill out into the street, placed under huge and shading umbrellas. The façade of the building, part of a terrace, is surrounded by red bloom bougainvillea climbing all over its walls and canopies. And tonight, the twenty odd seats were just about full, mostly with ladies all dressed to the nines and with manuscripts or loose papers in their hands. There were two microphones set up near the venue door, with a man standing behind each. One was holding a beautiful guitar that looked to me to be hand-made, and the other, like the ladies, seemed to be holding a folio of some sort.

We managed to secure the last table for two and a friendly waiter came and took my wife’s order for one of the vast array of salads on offer and I requested the apple and cinnamon crepe, and a large beer for me and a glass of wine for Dee. When it all arrived, shortly after we had ordered, the food tasted so good that we thought there could surely be nothing better than dining here in this idyllic setting,…..but things got even better.

One of the gentlemen started speaking in Spanish into the microphone and introduced himself as Ricondo Flores and his colleague on guitar, Sergio Pardon. So, we were about to hear some songs, and obviously all these ladies were here to listen to this duo. However Ricondo then began to read poetry, and although I could not interpret the words, I could certainly empathise with the moods he was conveying. There was gratitude for the wonders of this world, celebration for the island lifestyle and a deep reverence about the profundity of it all.

What a duo these two were. The poems were spoken in a warm, friendly voice conveying a sense humour and the guitar sought only to complement not to compete and together they commanded complete silence out here in this narrow street only twenty yards from the town square.

Occasionally Ricardo would invite a lady up from the audience to read her favourite poems, and wonderfully, the guitarist perfectly accompanied them too. Each lady read with clarity and obvious love of and respect for the chosen work in this poets’ corner of Lanzarote.
Then suddenly Ricardo asked, (in Spanish, but I recognise an opportunity to perform in any language) if anyone in the audience would volu….

I was out of my seat before Dee could grab my arm and haul me down, and as I approached the performance area I ‘explained’ to the rest of the people there that I was so impressed by the event that I had left my carrot cake dessert half eaten ! Then I remembered that it was likely that nobody understood me, so I asked in English if it was ok that I read my poem in my own language. Taking their bemused silence as permission, I took to the stage.

I eschewed use of the microphone, as being stuck behind that might constrict the arm waving and gesticulations I would need to help me get the point of the poem across to the listeners. I had a quick chat with the guitarist Sergio, and despite the fact that neither of us understood the other he played a perfectly sympathetic riff as I performed my poem, So Have I, a piece that I wrote some thirty years ago now.

Whilst working as a poet in the UK I was privileged to perform at some iconic venues but none of those events gave me such a thrill as delivering this one poem to such a friendly, receptive audience of people. I would later learn that they represented the reading group from the local library, and had arranged this night themselves and had secured the support of the two male performers.

With thousands of red petals waving around me, a bevy of lovely ladies in front of me and a great guitarist behind me, on a balmy evening of a blue sky in late sunlight, I knew I could never beat this,…so this crowd was actually witnessing my ’farewell concert.’

I returned to my seat to a smattering of applause and a smack from my wife and a growled ‘I can’t take you anywhere.’

The free event wrapped up at 8.30pm after a few more recitals and I spoke with one of the lady readers, Paulette Peyronnet, who was able to explain in good English what had been going on. She thanked me for joining in but I was at pains to compliment everyone on what was a lovely and moving performance. When I said that Ricondo had a wonderful speaking voice she explained that he is a radio presenter.

On learning I live on Lanzarote she went in to full advertising mode for El Patio, telling me there are regular evening performances of Cuban music here and lunchtime gigs, too, at the Sunday morning market.

Far from letting us feel we had intruded on to a private function, these ladies, and Sergio and Ricondo, and the waiter and owner of the venue, had made us feel welcome and part of it all.

By now, though it was time to move on to the concert we had actually come to see. We paid our ten Euros each for a ticket at the door, (we couldn’t get car parking for that for Manchester gigs when we left the UK).

The itinerant folk group we thought we had seen at the door earlier had by now morphed into a neatly groomed, suited and booted young man, with a girl who had become a lady and was now adorned in an elegant, full length, long sleeved, floral dress with her hair tucked beneath some sort of exotic wrap-around turban, though, of course I am not the fashion correspondent for these pages!

The Alondra Duo placed themselves on two Regency chairs in the centre of the stage and were then introduced to us by a gentleman we felt we had seen at other events serving in a similar capacity. Perhaps he is a promoter, or more likely a representative of the Ayuntamiento or Cabildo. He then stepped aside and let the ‘folk’ group begin to play.

Ten seconds in and we knew this was no folk group, after all. Francisco Yanes could really play and suddenly when Candelaria began to sing we knew she was soprano vocalist with an operatic range. Together they took full advantage of the lovely acoustics at Casa Museo del Timple as Candelaria stripped away the melodrama of Opera and performed with a clarity and skittishness that brought the whole event to life.

Francisco has that rare gift of being able to play along with a vocalist, matching Candelaria’s timing, so that voice and guitar were actually duetting, note for note. Whilst playing, all but his hands remained absolutely still, and this gave those of us in the audience a chance to listen attentively to his partner’s singing and follow the narrative of her song by her flashing eyes and facial expressions.

I gathered, or imagined, from the introduction at the beginning that this was to be a performance of songs from the Canary Islands that, in the course of history, had travelled to become associated with other regions, and that we therefore might find ourselves familiar with certain musical phrases. If so, that was certainly true of one song as I found myself singing along to, in a sotto voce yee haw country and western Dixie Cups style,… ‘and the chapel bells were ringing for poor little Georgia Brown’.

Candelaria’s sweet voice never became strident and indeed she had the skill of sustaining and fading notes at the end of songs, leaving music hanging gently in the air as she brought it to a close. Francisco, who seemed to me to play in open tuning all evening, also lent a very quiet voice in support of one or two songs, such as Caramba.

There was a nice presentation at the end from the venue to the artists. In memory of their concert here, Alondra Duo were given an enlarged and framed copy of the ticket for tonight’s event, with its black and white photo of those two people we had seen at the front door earlier.

They had, in truth, been perfect guests for this old, historic and distinguished venue, which as always, had provided us with musicians of absolute top quality.

More from Norman – Joni Mitchell would love them.