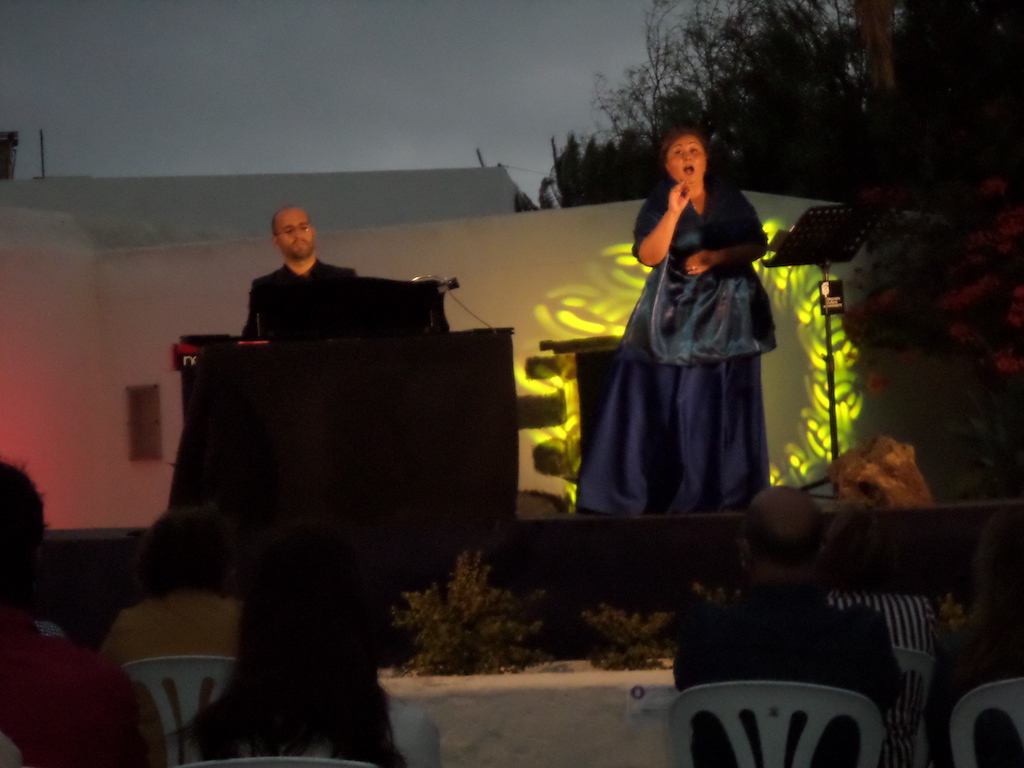 The best chance we have of beating the pandemic and returning to normality, perhaps even to a new and improved form, is surely to be best created by all of us working in concert. We saw that very clearly for ourselves at a lovely, new-to-us venue recently whilst enjoying a wonderful evening of excellent Soprano vocals and gorgeous piano music. On a surprisingly fresh evening, fifty fans, all with pre-booked free tickets, sat strategically distanced, on the building’s open patio. We were there to listen to beautiful music delivered from an open, raised platform-stage. This was enhanced by simple but effective lighting, against a live backdrop of wind-blown palm trees and a clear, not quite dark sky. This would not have been possible without the artists, the organisers, the police, and the public all working together respectfully, politely and sensibly to make it happen by adapting to new regulations with a minimum of fuss.

We were met by Civil Protection officers who politely welcomed us at the front entrance. They asked us to form a queue within a marked area, observing social distancing. A security guard was on duty to ensure the audience could cross into the courtyard area in single file only. Once on to the patio we were then met by a second security guard who asked us to stand in a particular position in order to have our temperatures taken remotely whilst we gazed at our own reflection on a small screen. We were then directed to a nearby reception desk.

A member of staff from Cultura St. Bartolome checked our i.d. against a pre-printed list and informed us of our seat numbers. These seats had been pre-booked via e mail to the above organisation as no live collection facilities had been possible. We noticed that the seats were strategically placed in an area that in kinder circumstances could have seated many more. Seats seemed to have been placed in groups according to the number of tickets allocated to each booking.

We had ordered four and had a row together. Those who had ordered in couples found themselves in two seats together, socially distanced from others, and we noticed what seemed to a mum and two young children in a row of seats for three.

Maria Garcia, the public’s point of contact at Cultura St. Bartolome, had a clipboard with all the information she needed to help us find our seats, as well as the information that could have been used to track and trace if needed. Once the performance was over the arrangements for egress were as smooth and well-managed as had been our entrance procedures.

By then we had enjoyed an hour and a quarter of sublime music. Judith Pezoa, who surely must have been very ´frio´ up there beneath the wildly thrashing palms, sang beautifully. I couldn’t see any signs of amplification yet her glorious voice soared out effortlessly into the arena. She sang in Spanish (or Canarian, perhaps) with Gonzalo Manzanares, her accompanying pianist, always enhancing her vocals, but never detracting from them,

From Las Palmas on the island of Gran Canaria, these two musicians proved very entertaining. Her songs obviously communicated to the rest of the audience that was, I’m sure, totally made up of Spanish music-lovers, though she also managed to convey emotions to we four on our isolated row of English speakers, I felt that the piano had a joyful, almost poppy tone, rather than the sometimes ponderous or bombastic classical style. Here we had riffs and trills and some gorgeous melodies. There were even a couple of times when I felt I had detected hey, yippee, i-o-I aye of Americana that could have as easily come from Copeland, Joplin or even Dvorak.

The first two songs were especially jaunty, though the third gave us a just-as-interesting, more melodramatic interlude. There were highlights everywhere throughout a set list that had been given a lengthy and explanatory introduction by the concert host.

The concert was well received by the audience who loudly demanded an encore, many rising to their feet to do so, and we were rewarded with a gorgeous, heartfelt rendition of Ave Maria.

As the audience filed out, several people lingered to catch a word with the artists, and Judith and Gonzales were patient and polite with all of us. We couldn’t mangle enough Spanglish between us to discuss those echoes of Americana but I hope to make contact with them again or with Cultura San Bartolome and so be able to bring you further news of other concerts at this venue and elsewhere by these excellent artists.

So ended our first concert since before lockdown, and how different it was from our previous occasion, almost six months ago on a night three or four hundred of us had strolled down into the deep underground caves for a small orchestral delivery. This tonight had been a tentative return to live performance, but had been strangely reassuring, and artistically as enjoyable as concerts on Lanzarote seem invariably to be. Of course, this was baby steps, at a safe, secure venue for a very small audience entertained by artists who played and sang their hearts out. We can only imagine what it must have been like for the singer and musician to look out into an all-masked audience. I can only hope our eyes were smiling brightly enough in the twilight to let them see how much we appreciated what they were delivering.

Take Glastonbury, for instance, which may not now be back even next year. Lydia Venn wrote on UK News on-line recently that Glastonbury festival organiser Michael Eavis has warned that Glasto may not be happening until 2022.

Although Lydia told him that she can’t wait that long, Michael said that due to the high numbers of people who go to the festival every year, 250,000 to be almost precise, it would be quite likely it won’t go ahead next year but that he is going to try and do everything to make it happen.

Michael said: “500 people is OK, isn’t it. But my job, 250,000 altogether, is too many people I suppose, isn’t it really? I’m still hoping I’m going to be running next year and I’m going to be moving heaven and earth to make sure that we do. But that doesn’t mean it will necessarily happen. That is just wishful thinking really.´

Michael has previously said they would go bankrupt if the festival didn’t happen in 2021 but has now said he thinks they will survive even if they do have to wait until 2022 for the festival to start.

“No, I do not worry at all,´ he said. I am so confident that it will survive. The only certainty I think is the year after, 2022. To be perfectly candid, so we might have to wait for two years maybe. However I am still hoping and we are fighting and working at it all the time to make sure it happens next year. You can’t kill it off just like that. It will come back. It will come back, probably stronger actually.´

Glastonbury was meant to be celebrating its 50th anniversary this year with a line-up including Sir Paul McCartney.

People might have to wait two years now to dancing in the mud with a tinny in hand, listening to artists like Taylor Swift, who had been scheduled to appear this year in support of a new album that has been critically acclaimed for its boldness in signalling new musical diversion for her.