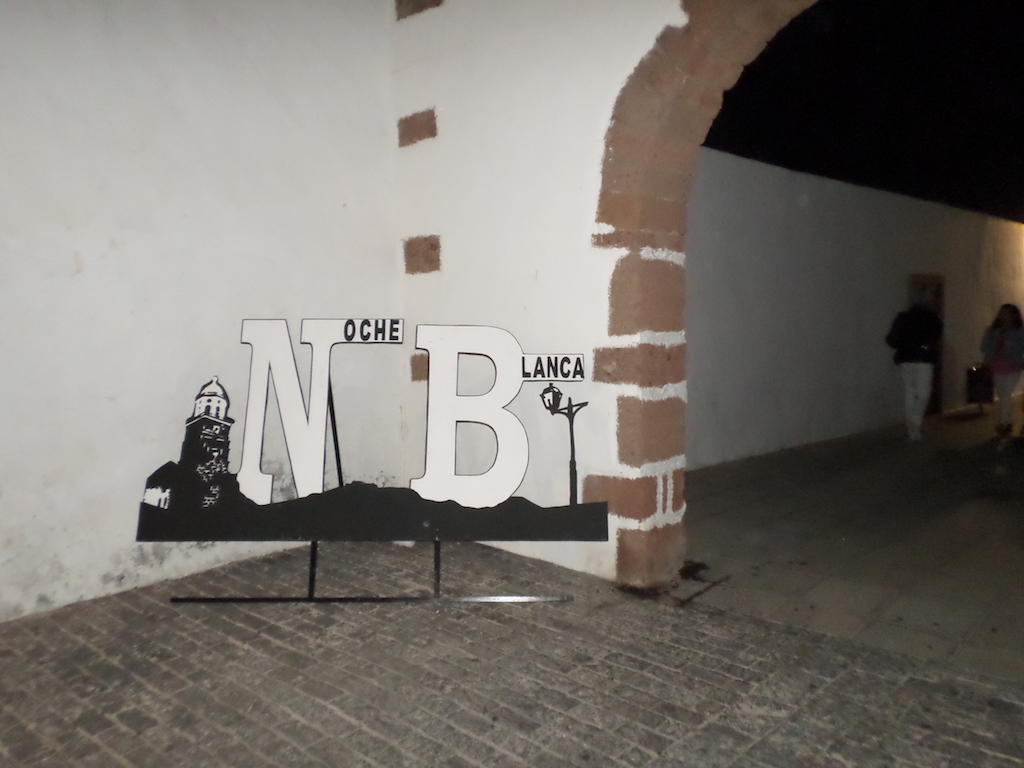 The first ‘Light Night’ event I heard of was held a few years ago in Huddersfield, in the UK. The following year my local town of Bury staged its own event and I was privileged to be invited to be one of the Rochdale writers to read at a complementary showcase held on the night.

Burry’s roads and pavements were festooned with bright, colourful lighting placed in the ground or hedgerows for maximum effect. Particularly eye catching was a display of umbrellas guarding hidden lights high, on a town- centre scaffolding. A professionally taken photograph of this installation now hangs in our home in Lanzarote.

There was music, comedy and dancing in fringe events and people strolled the streets and stepped into various performance venues.

Last week, here on the island, a ‘Noche Blanca’ event was staged in Teguise, when all those attending were requested to wear white, lending splendour and sophistication to the atmosphere.

This is evidence, perhaps, that ‘Light Nights’ are becoming (or, perhaps, have long-been) a global phenomenon. Rochdale ‘culture vultures’ turn out in force for the local ‘light nights’ but nothing can compare to seeing hundreds of families strolling the squares, streets and alley ways of Teguise, former capital of Lanzarote, described in every tourist brochure as a place with ‘600 Years Of History.’

By the time we had parked up for this year’s event, our second, there were few places left for a car of even our minuscule size, but thanks to the kind of parking I have become infamous for we were able to take the last available space, and grab an outside table at Cantina. This is a restaurant just down the cobbled street from The Timple Museum in Plaza De Los Leones, serving a range of burgers that are much more than mere burgers and desserts that make a man forget he has diabetes. They stock a good range of bottled beers too, and as we dined in fine style we watched local grandparents, parents and children amble around together, stopping at every nook and cranny to hear the bands playing or to watch junior theatre events for the younger ones.

After our meal we, too, meandered around town to where crowds thronged around the area designated for dance lessons and sessions, led by a professional, where scores of couples sashayed and swayed to infectious music.

My wife Dee reminds that last year Miguel reported in Lanzarote Information that he and his good lady took part in these sessions, but although I will do most things for our readers, dancing ain’t one of ‘em! Dancing should be an act of beauty but there is nothing at all graceful about me stepping out of time to the music after a huge meal and a couple of bottles of Kapitan beer.

Latino dance, ‘free dance,’ Cubana Salsa and even Salsa line-dancing, however, were being taught here in Plaza de La Mareta, with everyone invited to join in.

The bars and restaurants were all doing a roaring trade as were some of the clothes shops and arts and artisan stalls around the centre. As night fell and blackness descended the lighting and white clothing took on a startling effect and as we wandered around we realised just how many events were taking place simultaneously.

There had earlier been fashion parades, demonstrating the clothing styles of the town’s long history and a performance of Almigo, delivered for infants. A special sculpture by Rigoberto Camacho had been unveiled in Calle Rayo. In the same street, La Associacion “Amar y Criar”, disguised as a ‘flash mob’ performed an impromptu dance inviting members of the public to join them.

When I lived in Rochdale, working as a writer and serving on the board of Can’t Dance Can, a revenue funded arts organisation, we ran a flash mob event in which the girls ‘robbed me’ of my watch and danced away to escape. One of my most abiding memories is of a dear old lady in the crowd who saw this ‘theft take’ place and, waving her umbrella and swearing loudly, chased off my ‘assailant’!

In the Cada De La Cultura there were visual arts exhibitions, readings by local writers and poets and there were Henna arts delivered in Plaza Maciot De Bethencourt, and in this same venue there were relaxation, Zumba and yoga classes.

In the special zona joven there was dance and live music by ‘Distortion’ especially for youngsters, and unfortunately we just missed a Sample Of the Short, and Barbershop, which both sounded intriguing.

Most of the musical events for adult took place in Plaza De Los Leones and there we were able hear again the wonderful Lanzarote Gospel Choir. We reported on these pages their recent concert at Teatro Tias and this was the second time we had seen them for free. Last time they had been dressed all in black but their white attire lent even more joy here to their dynamic presentation of songs like Oh happy Day.

Following them was Dacil Santana, perfuming a set of songs called Desaprender in a really powerful voice for one so slight of frame. Calicanto delivered the sounds of the Canary Islands and other groups included Son Del Norte.

There were other music arenas dotted around town, and crowds of listeners and passersby were treated to group performances by the likes of Emisora Clandestina, Inerxia and Graduado Escolar and to Cuban music by Airis, Yoriell y La Band as well as Mayelin. Audiences enjoyed African music from Africa Yeah, and the sounds of Musica Ambiental Chillout encouraged listeners to do just what it said on the tin, whilst in Calle Neuva was the swashbuckling La Banda Radio Pirata.

In Calle Rayo there was a gorgeous performance by flautist Yadayo Tsuchiya whilst Bar El Chiringuito hosted three acts for the night, with Anonimum, Duo Caribe and Grupo Bourbon all giving we English a taste of their act in their name, even if in Spanish,

Solo acts included singer and mouth harpist Fran Baraja, and the wandering minstrel Vittoria Nicholas Zuliani who was playing, and encouraging members of the general public to play, an incredible sounding instrument called a Handpan.

The whole event had been an amazing spectacle, though better, (or any!) signage at each venue would have helped. I’m all for serendipity but there were too many times when we turned a corner to hear only the closing bars of the final song of an act who sounded so good that we were disappointed to have missed them. Understandably, I guess, the only programmes available were in Spanish.

I hope, though, that by referring to some specific venues and the qualities of so many acts that this review might encourage any readers who have not yet attended a Noche Blanca to open your new calendars in January 2019 and make a note of the third weekend of July.