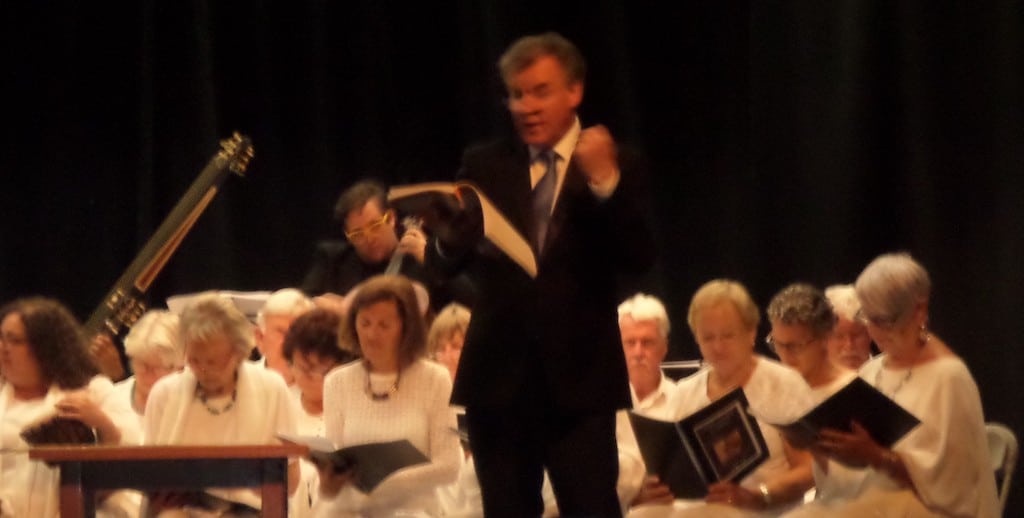 Dee and I already knew one or two pieces of Handel (although we were worried that what we thought was Handel might have been Haydn) and our friends Iain and Margaret also knew some Handel, so Iain had volunteered a couple of weeks ahead of this concert to set out on a scouting trip for tickets. Unwittingly he marched out on this mission not only with the wrong name of the promoter / organiser, but also with her wrong occupation and wrong location. However, we let Iain loose on these explorations because he never fails and usually comes back with even more information than we require.

On this occasion, he managed to correct all the details we’d had wrong, and managed to confirm the performance would be of G. F. Handel’s L´Allegro, Il Penseroso ed Il Moderato, and after confirming the date, time and venue (a reliable man of attention to detail is Iain) he also managed to purchase four tickets. Not only that, but he also arranged for me to interview the organiser of the event, Marianne Whelpdale, in a preview for these pages which Lanzarote Information kindly published a week prior to the event.

George Frideric Handel, considered one of the greatest composers of the baroque period, was born in Halle, Germany, in 1685 and died in London in 1759, where he was buried in Westminster Abbey. A prolific composer in many genres, Handel is well loved and remembered for his outstanding contributions to English church music, secular vocal music, and instrumental music of various types, particularly the concerto.

So on the afternoon of the concert we ventured up the highway from Playa Blanca to where we met Iain and Margaret at a point previously identified on our ordnance survey map, and then continued in their vehicle to the Teatro in Tias.

I couldn’t have driven as I needed to keep my fingers crossed that my tv catch-up would work when I got back home as, for the first time since Denis Law and David Herd (twice) scored to win the 1963 FA Cup final for Manchester United against Leicester City, I would not, because of this concert, be watching the cup final as it happened. I also had to keep my fingers crossed, of course, that Manchester City might not turn up and that Watford would be awarded a walk over. Of course, the reverse happened, and there can be no greater ignominy for a Man United and Bolton Wanderers fan than to watch a tv replay at 1.30 pm of Manchester City winning a Cup Final six nil !!!!!!

I’d had to miss the match ´as live´ because Dee and Margaret had suggested (read insisted) that we go early for a pre-concert meal in a nice place Margaret knew in Tias. La Ermita, of course, when we arrived there at six thirty, was closed for the owners´ annual three week holiday. We all trudged dejectedly up the newly restored ´dual carriageway´ through the town centre to a roadside café that, being honest, didn’t look too promising.

Oh me of little faith, though.

The beers were long and cold, the wines nicely chilled, the girls´ ensaladas were fresh, Iain’s fish was still flapping and the man behind the counter proved himself a true gourmet when I asked for the cheese platter and a plate of chips. He returned with a concoction that was a pile of hot chips sprinkled with a cheese I didn’t recognise. It didn’t exactly look appetising but it tasted wonderful, and we spent a lovely hour of the late afternoon there before strolling back down to the theatre. As we passed La Ermita on the way we turned the corner to find a brand new, well lit and beautiful looking restaurant that certainly had not been there the last time we were in town. Still, we’ve filed that information away for future occasions.

Any uncertainties event organiser Marianne Whelpdale might have had when I interviewed her must have been put to rest, I thought, when I saw the size of the crowd chatting animatedly in the foyer of the Teatro.

However when we spotted her in its midst and wandered over to say hello, I realised that like all event organisers she is determined to find something to worry about. No longer did she fear that the audience might not be big enough, but instead now feared that there might not be enough programmes to go round.

I quickly pinched one of the few remaining copies from her hand. Programme notes might prove invaluable, I thought, to a man who doesn’t really know his Handel from his Haydn.

Indeed, I learned from this sheet of paper the names of the soloists who would shortly give excellent performances. The three sopranoes were Susana Caligeris, Marita Noau and Romina Amoruso, the tenor who would deliver his interjections with actorly aplomb, was an Englishman called Philip Salmon, and the bass was Esteban Aranguiz.

There was to be an eight piece orchestra, coincidentally the same number of instruments as there were nationalities represented in the choir. First, second and third violin were being played by Maria Larumbe Martin, Sergio Garcia Caballero and Marcus Multhaupt respectively, a violonchelo by Miguel Angel Vilarino Martinez, a flauta dulce by Jorge Polack, a Tioba by Gustavo Navarro Torres and Cembalo by Guido Dangelo. Somewhere in the depths of this orchestra there was also to be, hopefully divested of all her programmes, the aforementioned Marianne Whelpdale on viola.

She it was who had recruited a return visit to the island from his native Argentina, of the musical director Sergio Siminovich, a man of gentle humour and musical mischief.

He would be leading the soloists, the eight musicians and the all-in-white gowned choir of voices from eight assorted nations whilst at the same time adding useful reference points about the narrative and the nature of the music, for those of us in the audience.

We first heard an instrumental overture before being introduced to each of the soloists, with Come Rather, Goddess, Sage And Holy being responded to by a delightful interplay between the tenor and the choir of Haste Thee Nymph, and Come And Trip It As you Go. In these two pieces the tenor introduced himself as a not to be denied rake revelling in his pursuit of hedonistic delights.

The work between choir and orchestra was intricate and precise and many instantly recognised melodies emerged, but it was the deliberately ´bumbling professor´ on the podium who kept things moving merrily along with sage information about where we were in the plot at any time and about the particular moods of those melodies we were so familiar with. Showing us huge hold-up coloured diagrams, he constantly reminded us that Charles Jennens, in writing this libretto, had created a dialogue between the contrasting ´moods´ of this music that was at once both dramatic and comedic.

This work by Handel contains extremes of both ´melancholy´ and ´merriment´ and Sergio Siminovich took great pleasure in explaining to us that Jennens had added his own third part to the libretto to settle ´moderation´ in between those two extremes. And a good thing too, according to Sergio, who recommended moderation in all things,… ´except politics.´

How wonderfully this concert justified the decision to invite him over from Argentina to add his humour and wit and obvious love of the music to this performance. His interplay with the soprano was a master-class of minimalist caricature, but it was, more than anything, the excellence of performance that he drew from his ´cast´ that made the concert so enjoyable.

The choir delivered of depth and richness, with the soloists all in good voice and performing with a smiling gravitas. There were, amongst them, performers we have seen with other choirs such as Christmas Voices, and it was good to see my writing group friend, Christine Want, taking part in yet another classical success.

The orchestra, too, was superb, although it was slightly unfortunate that the surface area of the stage meant they had to be mostly hidden behind the vocalists. There seemed to be an array of interestingly shaped instruments that looked as wonderful and intriguing as they sounded, and that reminds me that there was one particular section of the piece that was intended to resemble the call of church bells, and that so perfectly echoed that sound that we believed we were on some village green being beckoned to prayer and celebration.

As the audience tumbled out of the theatre we bumped into friends and acquaintances all of whom had been delighted by the concert. Mercedes, Carmen and Pilar from my wife´s yoga group were smiling and chattering and Beth was beaming and our friends Iain and Margaret had enjoyed it all as much as had Dee and I.

I’m sure I speak for everyone connected with this hugely entertaining performance in thanking Marianne Whelpdale for making it happen.

Only a couple of days later we managed to secure free tickets for another forthcoming event on the 29th May, the eve of Canaries Day, that will see The Lanzarote Ensemble, Acatife and our favourite timple player, Jose Perez, playing at ´the theatre in in the caves´ at Jameos. With this event and the Cuarteto De Cuerda Wolnosc, (which becomes a quintet with a clarinette ) in El Salinero at the start of June and then Sylvia Perez Cruz and Marco Mezquida performing later in the month at the same venue we look forward to bringing continued news, previews, interviews and reviews from all across the arts on Lanzarote.

Incidentally, whilst visiting The Department Of Culture Arts And Tourism in The Cabildo we undertook our usual re-enactment of the Hatton Garden Heist, not by swiping all the jewels in the art collection but by running off with a swag of leaflets and posters that had been left on their counters just begging to be picked up. Among them was a title we have seen before but have never had a copy to read. ´nu2´ (revista nudos – Arte y Salitre) is an A4 colour glossy that seems to be published on a quarterly basis.

The edition we collected covers the period of March, April and May and running across the top of its front cover are the names of featured and contributing artists including Pepe Betancort, Carlos Reyes, Miryam Ybotn and Racquel Plans, many of who we have featured here. Racquel is spotlighted in a fascinating interview that gives an insight into her artistic approach to life, and because the text is, quite rightly, in Spanish, it provided me with a weekend’s good reading to translate into something understandable to me.

´nu2´ is excellently presented on crisp, white pages full of some wonderful colour photography and legible fonts and, certainly for those of you lovers of the arts who can read Spanish, is well worth seeking out. We are fairly sure it will also be available from tourist information officers and some of the island’s service stations too.