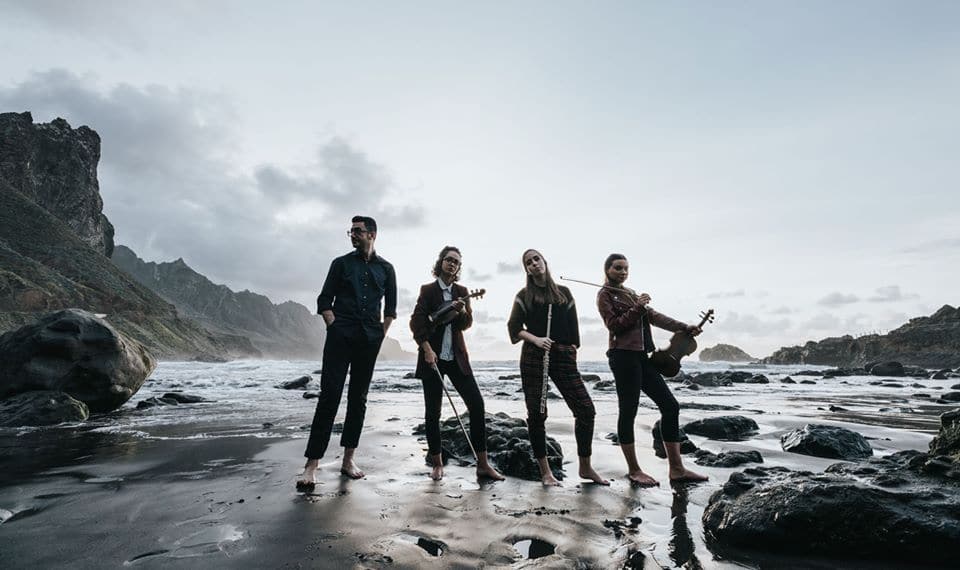 When we arrived to pay for our reserved tickets at the desk in in Salon Indieras in Tias for a Fundacion Nino Diaz presentation of Maximum Ensemble, who carry the somewhat grand sobriquet of ´maestros del minimalismo,´ we had no idea we were about to see our last gig before coronavirus would keep us indoors for so long.

The advertising posters had been showing four young people, carrying their musical instruments on a clouded but sunset-lit beach that might have been that at Orzola or Famera, that would soon seem like a reminder of days gone by.

We had enjoyed a pre-show evening meal, this time at the wonderfully Spanish L´Hermit where the whole meal was fantastic and served by a friendly young staff, and included a milk cake (who knew? Certainly not me) that was an explosion of the most amazing flavours. Meal and dessert for all four of us including a bottle of wine and two beers and two coffees was only sixty euros and with concert tickets at only 15 euros each our total spend for the evening would be 120 euros which, when broken down into paying for a meal and a concert, was for only 30e per person, which seemed pretty damned good. These must now be trying times for the management and staff here, as for all others working in the industry. We wish them well, and I´m sure we´re not the only ones who have pencilled their establishment´s name into our diary for the first time we can eat out when this is all over.

We were all looking forward to the concert, of course, but whilst we have learned to trust the concerts that are delivered on the island, we weren´t too sure what ´minimalist´ might mean in terms of classical music.

¨Might be a bit modern,´ said Iain whilst his wife, Maigret Marguerita, murmured that she was sure it would be lovely. My wife gave her best Mavis ´I don´t really know´ Riley impression, from Coronation Street. I kept my mouth firmly shut, hoping my friends might think I maybe did have an understanding of what minimalist means, whereas opening my mouth would have only confirmed that I didn´t !

Still nothing is too much trouble for my reader, so I looked it up as soon as I got home and am happy to share what I read on

´Minimal music (also called minimalism) is a form of art music or other compositional practice that employs limited or minimal musical materials. Prominent features of minimalist music include repetitive patterns or pulses, steady drones, consonant harmony, and reiteration of musical phrases or smaller units. It may include features such as phase shifting, resulting in what is termed phase music, or process techniques that follow strict rules, usually described as process music. The approach is marked by a non-narrative, non-teleological, and non-representational approach, and calls attention to the activity of listening by focusing on the internal processes of the music.´

I’m sure that clears up everything for you. It clarified things for me, but I had already heard the concert by the time I read it.

Whilst they occasionally played as a quartet, they actually performed in various configurations but, in whatever form they adopted, the instrumentalists would play with great empathy with their performing partner(s) to create gentle, searching and often seemingly introspective sounds of the kind that Ernesto explained as being regular film accompaniments.

The opening selection of Ode y Hammer by Nils Frahm even seemed to have the instruments playing mind games with each other. The music was, if not soothing, at least an aid to clarity of thought for an audience that at once seemed to engage with these young musicians.

Max Richter´s exploration of ´the nature of daylight´ had been employed in parts in films such as Arrival and The Queen Of Scotland, and the violins and flute ceded here to an eventual piano medley.

Philip Glass is a name many of us would have perhaps associated with minimalist music if only because nothing is much more minimal than the period of silence he once famously recorded. In fact, his Facades, played here, was a piece that sounded very familiar and was one of the highlights of the evening

There was a moody and spiritual delivery of Lalai, a composition by Barbara Heller, played here by violin with piano, and a gorgeous illustration of how tricks of serendipity occur and disappear whilst time passes on, oblivious to the adventure. With the piano representing the passing time and an emerging melody between the other instruments being such a serendipitous act this was perhaps one of the more accessible pieces in the recital.

The intriguingly titled Struggle For Pleasure by Wim Martens seemed at first to show each instrument struggling to reach for its own pleasure until, eventually, the musicians plainly achieved pleasure in ensemble music.

I was not familiar with the name of composer Yann Tierson but Sur le fil / Naomi / La Noyée on piano, flute and the two violins was seductive, moving from a tormented opening to a distressed drama and emerging at the other side with a beautifully languid close.

Neither had I heard the name of Arvo Part but the music of Spiegel im Speigel was instantly familiar, with the jaunty piano opening, followed by fine violin passages and then being joined by the flute. Ernesto informed us that Arvo Part is in fact ´the world´s most widely played living composer !´

So, the one composer involved in the playlist that I haven’t yet mentioned is Ernesto Mateo himself.

His piece, created to be played by four hands at the piano, saw him invite first violinist Laura Diaz to join him. Together they delivered a mind-boggling high speed ride across the entire keyboard as the two players appeared as if in competition at times and at others in complete synchronicity.

This was a passionate feature in a concert that, although delivered to a relatively small audience, drew a standing ovation that seemed to delight the players, who delivered an ensemble encore.

Excellent programme notes had been produced in Spanish, and I hope to put them into English translation and conduct an e-mail interview with Ernesto to bring you further information about the four highly skilled and passionate musicians who had brought us constantly changing moods in a ninety minute concert.

Since writing this review, a couple of weeks ago now, I have been thrilled to conduct an in-depth and exclusive e mail interview with each of the four players in Maximum Ensemble and we will bring that to the all across the arts pages of Lanzarote Information over the next week or two.