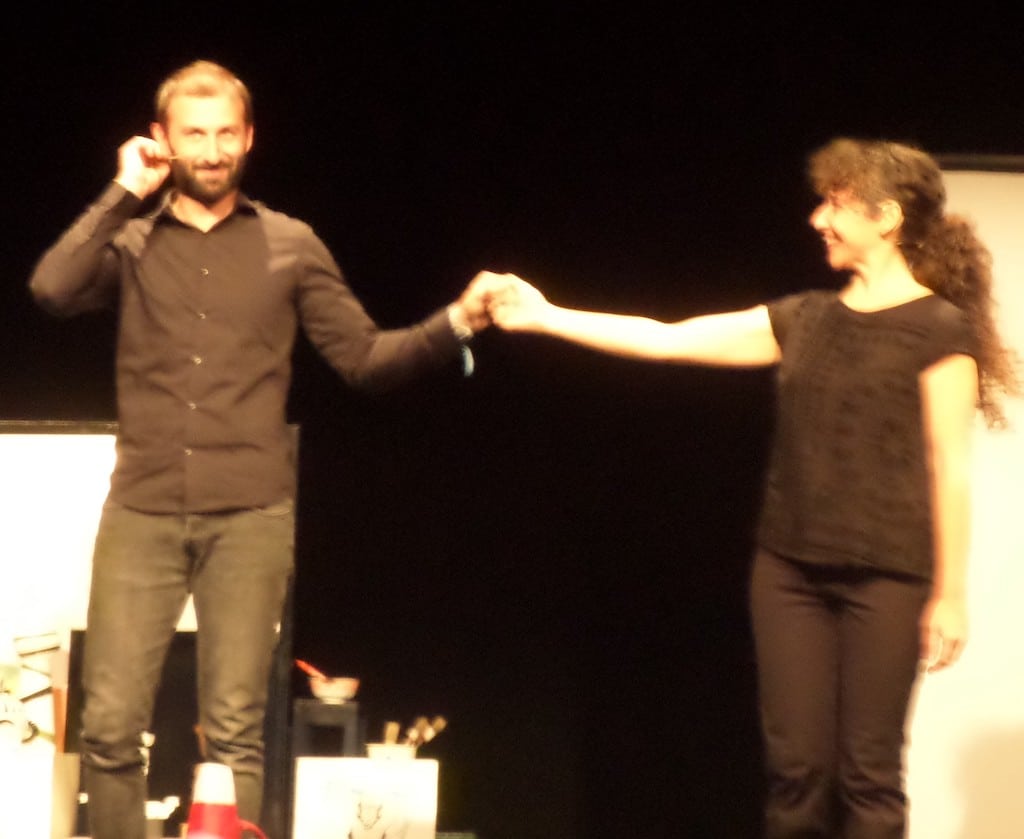 In blissful ignorance of what was to come we announced, only a couple of days before the lockdown was initiated, several performances in a short list of scheduled ´Treats In Tias.´ these would have been rolling out around now but only the first two events on that list were able to be performed. We learned quite a few things from them, though, including the fact that we were absolutely right to call them treats, and that we will lobby for them being re-installed if at all possible, when we’re all allowed out to play again.

When attending the two performances that survived we also learned that although several other good restaurants are available in Tias, there is one that particularly lends itself to a pre-show meal and another that might be more suited to a boisterous all chatty review of a show, and so is more appropriate for a later supper, swapping thoughts with other theatre goers.

According to the advertising poster for César Manrique; Rojo, Negro, Blanco, the show was scheduled to start at 8.00 pm and might run until around 10.00. We opted, then, for the modern design of The Kitchen, British owned by former UK residents and much catering to British tastes, for a meal before the show. The goats´ cheese with honey salad was a special starter for the day and was fantastic in its presentation and was amazingly moist and tasteful,… and filling. How I managed my Texas pizza, with its beautiful thin crust base overlapping the sides of my huge plate I’m not sure and it took some effort to force down what was not so much a portion as a week’s supply of fluffy bread and butter pudding and custard.

My wife Dee caught the cod and chips and, (there can be no greater praise) opined that these were even better than the fish and chips for which we used to make a weekly eighty mile round trip in the UK from Rochdale to Skipton. We would buy one of each twice at Bizzie Lizzie’s chippie by the canal, where I would devour mine, from the paper, beside the thrilling statue of Freddie Truman.

The guys and girls here at The Kitchen are a friendly bunch and the décor is as tasteful as the food. It’s on the right hand side of the main double drag as you drive down through the town towards Arrecife. We wish them well in the shutdown and assume they might be offering some kind of delivery of take-away service around the town.

Tickets were free on the theatre door for the production we then saw at Teatro Tias ..

Over a hundred people, mostly town residents it seemed, took advantage of the offer to see a performance that had already been delivered as two creative arts workshops earlier in the week.

César Manrique, Rojo, Negro, Blanco, featured Cristina Temprano and Ayoze Rodriguez. The play was a biographical performance of the artist’s life. Nothing could have prepared us for such a delightful, informative and thought-provoking presentation. This was a family audience in which adults chuckled at some wry artistic observations and even young children giggled out loud at the strange chemistry between the wonder-struck, optimistic and joyous girl and the somewhat more reserved and world-weary guy she falls into conversation with when she finds an object on the ground.

Triumphantly, she demonstrates all the things she could do with the bit of old wood she has picked up. In her imagination, and in her hands, it becomes a golf club, a loofah, a tennis racket, an eating implement, a paint brush, and of course, a guitar, amongst a dozen or so other uses that she mimes with great glee.

Given that I don’t understand the Spanish Language if anybody strings together sentences of more than two words, it speaks much of the skill of the two actors that I was nevertheless able to make some semblance of sense of the narrative that followed. The play is a vehicle for telling something of the biography of Cesar Manrique and celebrating his gifts to the island (and the gifts the island gave him!).

A sports journalist once wrote of footballer Wayne Rooney that ´he turned and shot with rehearsed spontaneity.´ That seemed so true of these two actors here, as well. They were word perfect in their delivery of what sounded more like every day shared conversation than the script of a play. Using another objet trouvé (that could have been a traffic cone) as a megaphone, Cristina jumped over rows of seats in the stalls to enthuse the audience to roar their support for the arts, and for the next forty five minutes these two musicians (he on the keyboards and she on piano accordion) used every trick in the artists´ skills set to deliver an oft told story in a new and exciting way.

There was shadow poetry to describe the relationship between Cesar Manrique and his father when the young artist decided to follow the arts as a career and to move to New York to become part of that city’s burgeoning arts scene. Cristina even delivered a little dance in her ´vagabond shoes´ to remind us how much Manrique wanted to be a part of it; of New York, New York. She had become, or turned herself into, or had adopted the ethos of, Manrique to such an extent that Ayoze was calling her Cesar.

There were sophisticated back-lit sandboxes that enabled her to illustrate how Manrique arranged his deceptively simple artistic logos of Lanzarote when he returned to the island, and we even learned how it was the very enormity of New York with its grey skyscraper shadows that made him so determined to create the sun-lit whiteness of the low buildings we now associate with Lanzarote.

We have witnessed many marvellous arts events in the five years we have lived on Lanzarote but rarely have we seen two actors take their subject and their script by the scruff of the neck and wring from it every drop of humour and emotion. Ayoze and Cristina demonstrated their mastery of a number of arts techniques in a way that drew a standing ovation that seemed to somewhat surprise them.

If these are artists, as I think they are, who deliver workshops to the next generation, then the arts offer on Lanzarote, and the positive attitudes to life it engenders is safe for a few more decades yet.

We spoke briefly with Cristina after the show and we are trying to arrange yet another exclusive all across the arts interview for Lanzarote Information and our Sidetracks and Detours blog, with an artist we are sure will have a fascinating life story to tell.

So, look out for that interview, too, as we strive to keep supplying light reading material all across the arts to help pass shutdown time.

Take care and stay safe folks until we can all party party together again !