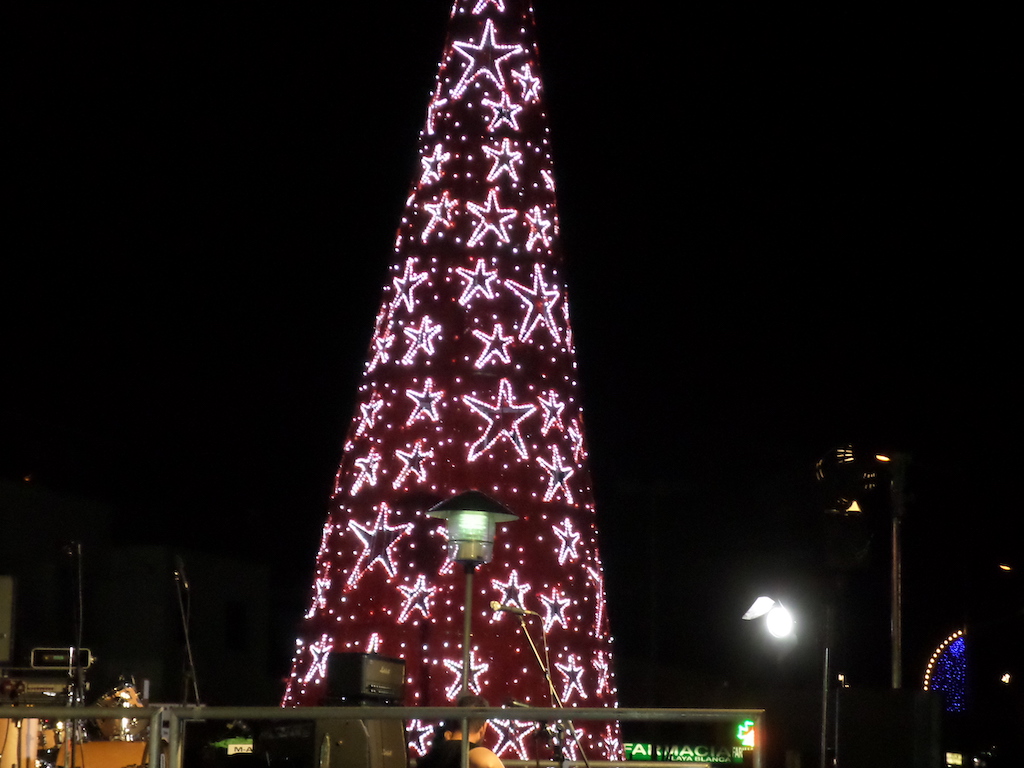 It seemed that to switch on the lights, they first had to turn off the lights. We drove from Shangri La Park into the centre of Playa Blanca in pitch darkness which added a quiet drama to the occasion, to witness the ceremonial switching on of the Christmas lights on the tall red tree that had been erected a few days earlier at the bottom of Calle Limones. It stood at a somewhat jaunty angle, it has to be said, seeming to lean at almost thirty degrees down towards the sea, wearing what appeared to be only a plain, red cape.

We parked on the harbour car park and by the time we wound our way down the street, there was already a crowd of a few hundred people waiting patiently for whatever was going to happen.
Diverting entertainment was being provided at this stage from a small stage beside the tree, by a young musical trio of a girl singer and two male guitarists. They were performing what sounded to be contemporary Spanish pop songs, and to have the confidence to deliver in front of a crowd of this size seemed astonishing in ones so young. They were right to trust their abilities, though, and were warmly applauded at the end of their set, which signalled the commencement of official proceedings.

The suspense was gripping and the friends we bumped into in the crowd seemed giddy with excitement. Mike suggested there would be a communal countdown from ten to one as the last few seconds ticked away. Maybe, he said, that countdown would be led by a celebrity. Perhaps he reckoned the Playa Blanca Christmas Light Switch On might have been the real reason for the Spice Girls re-union, but alas, Mel B and C and Sporty and Baby did not turn up to tell us what they really, really wanted, presumably having written it down instead in a letter to Santa, while Posh was at home designing expensive Christmas stockings.

It was, instead, a short speech by the Mayor Of Yaiza that was the formal opening, and there were appropriate gasps of appreciation, as the lights then came on. Suddenly the plain daylight apparel of the tree was seen to be festooned with lit depictions of gifts and baubles and other Christmas scenes. This seemed somehow to even increase its height and it towered down over us as we gazed up to the church of Nuestras Senora del Carmen, where blue and golden fixtures attached to the streetlights seemed to drift away to infinity. Turning around to look back up the street we saw lighting strung across overhead, and adornments affixed to the street lamps complementing the already colourful shop fronts.

Entertainment duties were now taken over by a powerful rock band who chose just the right sort of pounding, anthemic songs to keep the youngsters in the crowd involved without driving away the parents and grandparents.

Later, we wandered down to the beach and walked up the coastal path to our favourite Mama Rosa restaurant. We were greeted like royalty, as we and all their customers always are. The Tacos Buffalo Bill, (the staff just bring it to the table now, without even showing me a menu to pretend to ponder over) was surely an appropriate Christmas meal for such an occasion and we dined with the faint thunder of the rock band rolling in the distance.

As we ate, our conversation was one comparing tonight’s events with those we had seen in previous years when the lights had been switched on instead in the foyer of the Princess Yaiza Hotel. Those had been grand affairs with a much bigger congregation built of hotel guests, local residents and even visitors from surrounding towns, and had been preceded by stage presentations from the hotel’s entertainers, with elaborate Christmas settings to complement the performance.

Tonight’s town centre ceremony had been far less opulent, and far less elegant but its quietness was perhaps more thoughtful and reflective. Both kinds of events were effective in their own way, my wife and I concluded, with the kind of easy and rapid agreement that for so long was absent in the Brexit negotiations.

The next night, the Saturday, took us to another kind of extravaganza, that of the annual Food Fair in Teguise. Food, and a fair, what’s not to like?

We arrived in the town, currently celebrating the six hundredth year of history, just as dusk was falling and their own Christmas lights, strung around tree trunks, and hung over the squares and side-streets of the town centre were sparkling against the night sky. What a sight it was to behold as we walked down from the car park to the area where the Sunday morning market is usually installed to see rows and rows of tents and gazebos each holding stall after stall of depictions of Lanzarote and Canary foodstuffs.

Like most such events on the island there was a simple system in place that enabled us to buy a handful of tickets that we could exchange for taster samples valued at one or two tickets. With each ticket costing only a Euro, this allowed us to wander the stalls, dipping in to satisfy our taste buds with bite size samples wherever we wished.

All our other senses were catered for as well, with the colours of the food as vibrant and as muddled as an artist’s pallet, and the smells, when next to any particular stand being evocative of the food being prepared and delivered there but, when we were out in the middle of a crowd on the move those aromas combined to remind us of the enticing smells waft by us as waiters take different orders around their restaurants.

The sounds were of the buzz of conversations, the sharp intakes of breath at the spiciness of some of the foods, the shouts of stall vendors to attract attention or to describe their recipes or preparation procedures, and of Canarian music playing around the bodega stands.

There was beer and wine and sangria available, and being partaken of, but the behaviour of everyone even in such a crowded arena, was impeccable. There was no pushing and shoving or kicking or cursing, and as I feel compelled to point that out I am left reflect on how sad it is that such actions had become the norm at carnival, fairs and similar events back home.

There were stands hosted by big, and smaller, hotels many of which we had seen on our drives around the island and a few of which we even used to stay at when visiting for holidays. These included The Princess Yaiza Hotel in Playa Blanca and The Los Jameos Playa in Puerto del Carmen.
There were drink bars, being run for charity fund raising purposes by The Rotary Clubs on the island, and Grupo Hurricano was a huge presence with an incredible selection of bread and biscuits. There were sausages and spare ribs being cooked at some stalls, and there was prawn skewered on local cheeses. We also found a lovely little display of jams at Rufina, where we purchased a jar of red pepper jam and green pepper jam.

Our tickets bought us the jams, and tasters of tuna on a bed of mashed potato decorated with a marigold, a generous piece of gluten free pizza and a tuna tomato mixture on what my wife called a ´giant crisp.´ I tried beautiful goat cheese with marmalade (it sounds a lot more sophisticated in Spanish, to be fair), a cheese and marmalade concoction in a chocolate covered crepe, crispy, fried local potatoes, and a gluten free apple bun.

I might not, at first, have been particularly interested when my wife pointed out the Nao Brewery stall until she reminded me that they brew Kapitan, a bottled beer I have come to love since ´discovering´ it on sale here in Teguise, at La Cantina, a year or so ago. I thought it was good of her to point that out to me, and then realised she had also spotted with her eagle eye the Lo Conoces bar promoting a vast array of different flavoured gin.

There were glossy brochures and business cards by the handful at each table and we left with enough reading to see us through until Christmas morning. These even included a book on Ëxperiencas Gastonomical En El Mediterraneo.´ There were, too, fliers advertising the Cook In Lanzarote courses in Uga that we know Miguel has participated in. Many of the fish restaurants from El Golfo were represented, and restaurants from Puerto del Carmen were advising us of their pintxos and tapas.

There was meat and fish, savoury and sweet, fruit and vegetable, cous cous and cocktails, biscuits and buns and bread and beer. What more could a man want?

Perhaps only a few minutes of peace and quietness far from the madding crowd in the company of his wife to reflect on all we had seen and heard and smelled and tasted and touched. So as we sat outside for a beer and a glass of wine at La Palmera, whilst inside the bar was full of its usual bohemian hustle and bustle, we talked about what a sensory experience it had been. Even the sense of touch was addressed by the textures of the food when you handled it, or by the newspaper cones or reinforced card trays the tasters were supplied in.

We had heard that there were cookery workshops being delivered throughout the weekend by renowned chefs on the island such as Gemos Blanco, Luis Leon from the Toro steak bar, Pedro Santana, Juan Perebono, Tino Otero, Alvaro Gartas, Ira Espinosa and Adrian Felipez.
We also heard from a friend that she was going to be attending several of these and that she would be delighted to meet up for a chat, or what I call a live interview, so that next week we might be able to let you know how such workshops are delivered.

So, it was a busy weekend, and I haven’t even had space to tell you about why the football match at UD Lanzarote was brought to halt for thirty five minutes by what appeared to be an illness of the referee !