Late Night Fireworks On The Beach 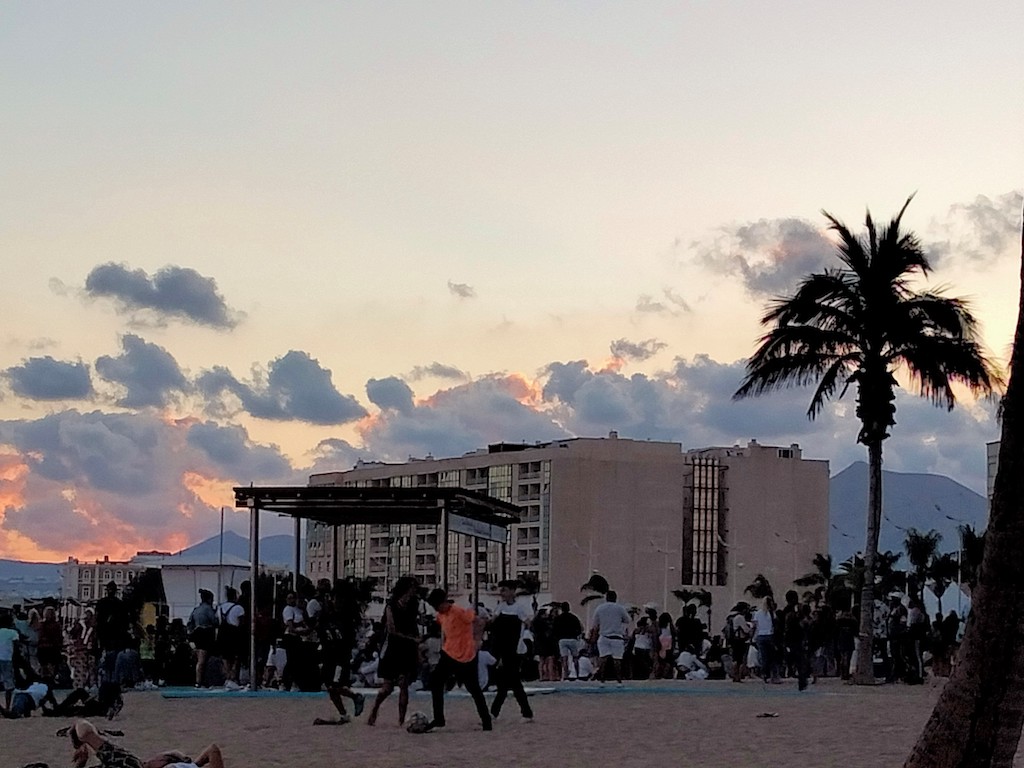 Arrecife city council put together a programme of recreational and sporting events on the occasion of San Juan, which delivered its main course on June 23rd at El Reducto beach- The event took place from 7.00 to midnight with a concert y GI Nandy, Tio Matt and Kardomillo as well as ´a public barbecue in the heat of a large bonfire. The lighting of the bonfire was at 9.30 and it all culminated at midnight with a firework display.

The mayor, Astrid Perez, expressed her ´joy´ that ´after many years without such events being organised by the city council, probably for covid reasons, when she announced that her government group had drawn up such an attractive programme for the festival of San Juan, that she was confident would help us all fully enjoy a night full of tradition and symbolism.

San Juan is an important mid-summer fiesta across Spain. It takes place around the summer solstice on 23rd June and dates back to medieval times when fires were lit to protect everyone from the evil spirits which tit was believed were released when the sun turned southward.

I am aware that Miguel has told the customs of the San Juan Festival many times on these pages, but I was intrigued by a piece on-line by Alejandro Delgado, , a ´Remote Worker´ (and local) who lives here on the beautiful island of Lanzarote. The main reason he created his blog For Digital Nomads And Remote Workers is to share some of Lanzarote´s most exclusive places to visit and experiences to live. Alejandro regularly posts about people, places or objects. He writes with vivid description and also offers honest recommendations. One of his most recent posts was about The Festival of San Juan.

He tells us that every year, the Fiesta or Noche de San Juan in Lanzarote welcomes summer. A mythical celebration in which the beaches of Lanzarote are filled with bonfires, popular barbecue pits, fireworks, concerts, and events for all ages.

We have attended several Eve of San Juan festivals over the years we have lived here and had missed them when lockdown curtailed the activities for covid reasons. So reminded, and encouraged, by Alejandro´s post we headed up to Arrecife. We took a slow ´red velvet steering wheel car with driver´ kind of ride over La Geria´s vineyards and the world seemed to stretch out before us. We congratulated ourselves many times during the saunter that we were in plenty of time and would be sure to quickly find a spot to settle before the crowds got there. Sadly we arrived at the very second the police car in front of us pulled up to block the road through Arrecife, so we had to turn round and go back up the motorway to park at San Gines a couple of kms away. We parked on the stony car park there guided by the attendants you wouldn´t like to argue you with as they stand in front of you with hand outstretched from their high vis jackets asking for a euro to mind you car, senor.

They are actually decent guys and girls who do their job properly, even later guiding us back to our car when we returned to the car par around midnight. They do look they would take no nonsense, though, and so serve, I´m sure, as a deterrent to anyone who might step too near my vehicle in the course of the evening.

We still had time on our hands so a couple of pizzas and pints at The Davina Restaurarnt killed another hour or so. Then we killed another hour over coffee and ice cream just three doors away. This is a wonderful walk way, around the San Gines lagoon with its under the bridges tidal system, hundreds of small boats moored on the water, and the backdrop of a row of thirty to forty restaurants, coffee shops, gift shops and a cinema. Local families, dad just home from work, mum all dressed up as Spanish ladies always seem to be, and young kids running ahead of them and waiting for their parents to catch them up at every ice cream place along the route. Teenage boys and girls walk hand in hand, oblivious to all this, their eyes only for each other. There are busy secretary types clicking their heels and their fingers on their phones as they text important messages, and then there are gaggles of young girls in giggling groups.

The food and service at both our venues had been superb but it was time now, eight o´clock, to collect our fold up chairs from the car and head two kms back on foot to find a good vantage point somewhere along the closed off roads.

We settled for placing our seats a cricket wicket behind ´the throng of blowtown´, the thousands who were gathered round the stage on which a dj was playing the sounds of Queen to the obvious pleasure of the ´loyal friends and front row dancers´ who were all obviously radio gaga and were roaring back, ´No, we are the champions of the world !

The dj and his crew were obviously under pressure to maintain the attention of the crowds until the ceremonial lighting of the beach-bonfire at about ten o´clock Spanish time, (so that´s give or take a manana or two).
Actually it happened right on cue to the dj´s ´final countdown´ . and although we were two or three hundred metres away we had a perfect view, as a spark accelerated into a huge billowing flame, the heat from which carried right across to out chairs beneath the palm trees on the beach. The formal firework display would not be until midnight, we thought, so we packed up our seats and agreed to take a slow drive home and look at the various bonfires on the landscape as we passed by and probably arrive back in Playa Blanca for their firework display.

Just as we turned the bend away from the festival, there was a loud bang, and we whizzed round to see we had a perfecr view all the way down to the beach below us, all the way to the bonfire from where the firework display had just been launched. We were perfectly placed, just outside the island´s only sky-scraper hotel with no other persons or buildings in our eye.line. The whole thing lasted about fifteen minutes and made magic in the sky. Colourful cascades followed every loud dull roar of the fireworks. I can remember the word for the people who design such shows, but for whoever he or she was on duty the word artist is no exaggeration. There was a sequenece in whch the high in the sky explosions took place simultaneously with over-flowing roman candle waterfall effects, set at a lower leve,l that created a mesmerising minute or so.

So now we could head back to our car knowing we had seen everything we had wanted to see, and that we had enjoyed it all in a harmonious and safe environment. Lanzarote does this sort of thing so well.

On the way back to the car park, however, we were distracted by, nay entranced by, nay, nay, lured by, nay, nay and thrice nay,..we were seduced by a solitary empty table at the open air Parada Cafe on the main drag (literally) back to San Gines car park. One small beer and one small beer sin alcohol in one our favourite buzzing little bars brought the evening to a perfect end.

The car park attendant saw us coming and lit by torch our way to the car and stopped traffic for us as we exited the car park, and, of course, leaned into my open widow, arm outstretched through his high vis jacket to smilingly aceept another euro. Euro in, euro out and cheap at half the price., as Boris must once have said.
We arrived at home to find our five cats and one of their friends waiting for us on the patio greeting our arrival with miows that sounded a lot to me like, ´you rotten stop outs !.