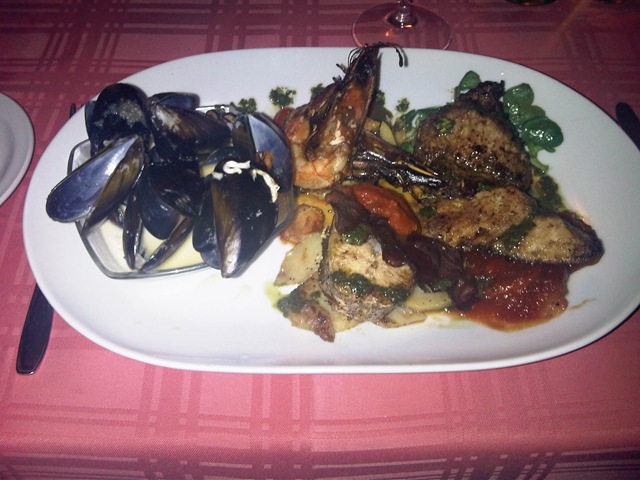 We met Debbie Jones, the owner of Restaurante Verde Mar at the Camel Media Group Seminars in Puerto del Carmen. I had seen the sign for the Verde Mar off the main road in La Santa but had not visited the restaurant before. When Debbie contacted me to say she had taken on two chefs we knew, called Dave and Andre, we were keen to head over and taste the new menu.

Verde Mar is situated right in the centre of La Santa, in the second row to the sea just behind the Pro Bike shop, with easy parking in the street. We found the entrance to the restaurant very welcoming with plant pots and candles leading up the steps. The place was buzzing, it was a good job we had reserved a table, as there was only one vacant.

Debbie brought over the daily specials board and menus and I found it really difficult to decide as there were lots of dishes taking my fancy. Having struck a deal with Miguel that I could taste his food we opted for Verde Mar fishcakes from the menu and crunchy calamares from the specials for starters. The main courses we selected were both off the specials board, mixed fresh local fish platter and fillet steak with peppercorn sauce. I loved the personal touch of children’s drawings in the front of each menu.

Both starters were delicious, the calamares were served in a crispy polenta coating on a bed of leaves dressed with a mint and mustard dressing and two huge crispy fishcakes were served on a bed of spinach with a peppery dressing.

Our mains arrived and boy are the portions big here! The fish plate couldn’t be any fresher, Debbie explained that the local fishermen call to her when they arrive back with their catch at the harbour which is a moment from the restaurant. Today’s offering was hake, shark, marlin, mussels and langostinos. Each fish piece was accompanied by its own dressing, I loved the meaty texture of the marlin, but my favourite was the delicate flavour of shark! The fillet steak was superb, charred on the outside and rosy pink in the middle, the peppercorn sauce was glossy and rich with sauted potatoes and a selection of vegetables.

I decided that there was no way I could actually fit in a dessert but I shouldn’t have looked to see what was available……….I can’t resist a sticky toffee pudding! Miguel not wanting to be left out, had to accompany me with the sunken chocolate pudding which simply oozed with chocolate.

Restaurante Verde Mar is definitely worth a visit, the portions are hearty, the food incredibly fresh, the specials change daily and the staff are amazing. The menu also stated that they cater for coeliac gluten free food, just ask if you have any special dietary requirements.

Casa Rosu is well equipped and furnished to a high standard, the villa is situated in an elevated position in an exclusive area of Las Coloradas.