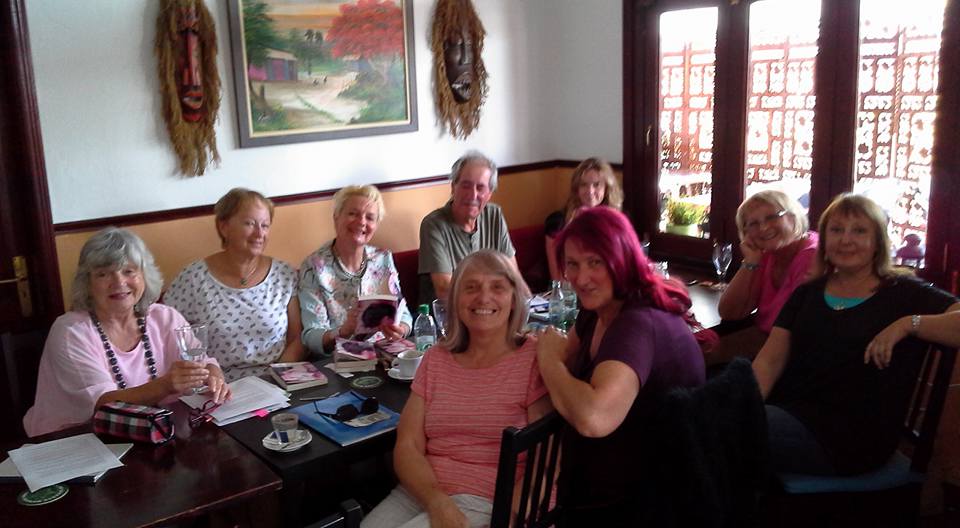 When settling here in Lanzarote five years ago the first thing I did was look for a creative writing group I might be able to join. Having facilitated and ´taught´ creative writing groups for the previous twenty years in the UK I knew it would be strange becoming a ´pupil´ again but I need not have worried. Within two weeks of moving into our new home here, I had been made welcome as a member of The Lanzarote Writing Group by Sue Almond, who had formed the group ten years previously in 2005. By the time I arrived the group was holding its weekly meetings in Costa Teguise, though they had previously convened for a long time at The Crafty Cow in Puerto Del Carmen. When Sue returned to the UK a couple of years back a number of her members decided to continue meeting and working in a lightly less formal manner.

Author Jim Loughrill, radio presenter Aileen Hendry, Jenny Graham and Rebecca all regularly meet to continue discussing and supporting each other´s writing projects, and have even been joined by new members.

When Sue left, Rebecca and her friends felt it would be a shame to let the group close as they would all miss the social aspect as well as the writing. They still meet and were together most recently at The Ohana Café in Costa Teguise.

Ohana Cafe Bar was launched last year in a busy space, adjacent to Hotel Coronas Playa, Av. del Mar, 35508 Costa Teguise, Las Palmas, Spain. The venue currently offers a very successful, authentic tapas-based menu, popular with both tourists and residents of all nationalities. Unusual for a new business, the cafe has already attracted a near perfect catalogue of reviews including more than 50 on Google and TripAdvisor, driven by fabulous feedback. The building consists of a large zone for tables both inside and out, making good use of a sheltered terrace, plus bar, kitchen and modern bathrooms. The cafe is established within the most exclusive area of Costa Teguise, Playa Bastian. The current business owners have created a space that has grown in popularity incredibility quickly, supported by a professional brand, clever advertising and absolute attention to detail. An international consultant was used for social media success, resulting in 5 star, 100% positive feedback on Facebook, so important to all new businesses in our tourist resorts. The website and digital resources are included in the package. Unfortunately, with everything going so well Ohana Cafe Bar has had to be placed onm the property market due to family reasons, but Lanzarote Writing Group has already proved its durability, and I am sure it will survive if it has to move on.

The group, meanwhile, continues to fulfil exercises in genres such as flash fiction and generally create pieces of 500 to 1,500 words. I remember from my time with the group, too, that there was nothing to frighten the horses. Prospective members can be frightened off by technical literary terms but the remit of the group is to, first and foremost, simply enjoy putting pen to paper.

Long-time member Aileen Hendry confirms that and often says that ´putting pen to paper is what is important. Once you start, you trigger and release memories.´

Aileen´s colleague Jenny Graham concurs with her, by revealing recently to Gazette Lanzarote Life that, ´as a motivation to writing, the group are planning to publish something in May 2021.´

I remember Jenny Graham as a fine writer, creating characters each with their own recognisable voices, and I loved how Jenny created subtle tensions that would creep up on her reader. She enjoys the meetings still because members pass constructive comment on the work of their colleagues and that has helped in her creating a new horror story recently. Jenny´s writing was always clearly distinctive but when I was attending each member certainly had their own particular forte.

Now, I hear from friends, newcomer Fiona Kershaw is an accomplished poet who actually wrote a poem about Lanzarote Writing Group, under the friendly title of Our Bunch, that was published to accompany their recent press coverage.

Another new name to me, Ann, I´m told works in the classic mystery genre.

I have also met Jimmy Dobro, a great musician who enjoyed a successful stage and recording career and is now writing a children´s book.

I was delighted to make friends with those Lanzarote Writing Group members I worked alongside, such as Aileen Hendry, who continues to create hilarious pieces. She is a well-travelled lady with a keen eye for incident and, from Scotland to South Africa to Spain, she remembers them all with a clarity that brings them to vivid life for her readers. She is also a well-loved presenter on Monster fm radio where she sometimes gives verbal tellings of these tales.

Jim Loughrill has published a book, My Silent Voices, in the last couple of years, which would reward your search engine´s exploration. Jim is sure to produce more work, I feel, perhaps in audio formats, in the years to come.

Sue Almond has contacted the group from her boat house in the UK to say that she is ´really happy to know that a version of my writing group continues to exist on the island. The fact that it has continued to thrive for so long, already fifteen years by the time I left, suggests that people enjoy being members and get something worthwhile out of it, which is very gratifying.´

Sue referred to ´the swallows who regularly joined us when they landed on the island who will be delighted to know the group is still there when travel restrictions end and they are able to flock back.´

´With a bit of luck,´ she hinted intriguingly, ´I might be one of them´

Sadly I can no longer commit to a regular attendance at the group because writing for Lanzarote information and publishing my own daily Sidetracks & Detours blog takes up all my spare time, but I was thrilled to hear this positive news and will certainly make time to attend a meeting when their promised work is published, and see if we can secure an interview with those who are writing of these times we´re living in.