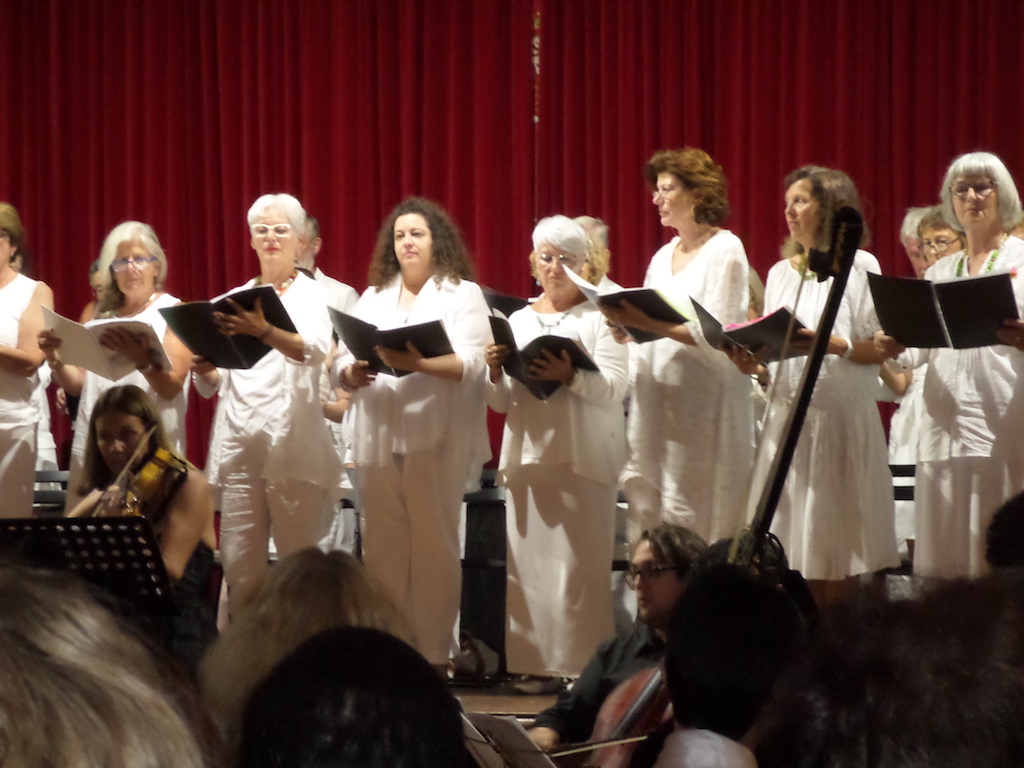 If, initially, only to lend support to a couple of friends and acquaintances involved in the production, we recently drove the few miles from Playa Blanca up to Yaiza to see a performance of King Arthur, written by Henry Purcell. Based on work by Thomas Dryden the piece was first performed at The Queen’s Theatre in London in 1691. The music was certainly in the style of what I would have called traditional English music when I was working in the folk clubs of the nineteen sixties in the North Of England, when such clubs were re-staging the English civil war between armies representing ‘traditional folk music’ and ‘contemporary folk music.’

To be honest, Purcell is far more of an acquaintance than friend. I am on far more familiar terms with the music of Twentieth century songwriters from Texas and Mexico than the music of this man, who had termed this piece as ‘postcards from Great Britain.’

Furthermore, King Arthur was being staged in Casa de La Cultura Augustin de la Hoz, Yaiza an unlikely setting here on Lanzarote for such a quintessentially English music. However, under the musical direction of the engaging and charismatic Sergio Siminovich, the choir and orchestra that here carried his name included representatives from ten nationalities including Spain, Italy, Netherlands and the United Kingdom. In fact, a couple of the soloists who had performed the previous night at the Fondadero in Peurto Del Carmen, had already returned home to Argentina, as this add on concert had not yet been arranged when they had booked their passage.

The predominantly female were dressed in all white, very maidenly, very Camelot, and some male singers also wore white. The male soloist wore a casual jacket and open neck shirt and the female soloists scarlet dresses, like wild roses in the English hedge row.

Based on what we consider to be the mythological days of Camelot the music in the piece is referred to as being played by ‘gods, shepherds and soldiers’ and accompanies a plot that describes the battles between the Britons of King Arthur and the invading Saxons, who, under the leadership of King Oswald of Kent had kidnapped Arthur’s blind fiancé, Princess Emmeline of Cornwall. At an allegorical level, though, the piece is about the battle to retain a lifestyle against modernity.

The string introduction was stately and sedate but the deeper sounds of the cello seemed starkly foreboding. The tenor soloist and one of the two female soloists carried the narrative with full choral and orchestral support, with that harpsichord sound becoming prevalent.

Director Siminovich, who seemed almost to be ‘throwing shapes’ as he directed both choir and orchestra then spoke of how ‘war is the spoiler of all nature, and yet somehow creates beautiful music.’ Nymphs, and elves and rivers and flowers were being ravaged by the war, and we were told to listen for their words used to repel invaders and the harsh, nasal voice in which they were delivered. We were reminded, also, by the music, of the beauty of nature in that England, as the tenor and the choir reminded us How Blest Are Shepherds.

A brief interval allowed us time to step into another room and explore a small exhibition of paintings by Pablo Ravelo Guitierrey, a collection of the landscapes and seascapes this unique volcanic island has created. There were interesting interpretations, too, of lava running through rock. The exhibition will, I am sure, reward a return and we will be back to study it more carefully over the next few days

For now, King Arthur’s fight continued, even if this second half of Purcell’s work focussed on what Siminivoch called ‘affairs of the heart.’ Again the musical prelude was, as in the first half, very courtly and once more carried a sense of danger.

Later in this section he joked with the audience about the jingo-ism of war and how that was reflected in the ‘sublime music about capitalistc attitudes.’ It was at this stage in the proceedings that the musical director briefly played a flute-like instrument, bent at the waist and peering to his side like Ian Anderson, who some English readers might remember to have been the eccentric leader of a band called Jethro Tull, all of which seems to run strangely parallel to the story of King Arthur.

Somehow Dryden and Purcell seemed to suggest that this war was really taking place in the song and storytelling to be heard in the new social centres of England at this time, … the pubs ! A scene of drunken ribaldry then seemed to fit the opera, and bit parts by some of the men playing seasoned drinkers were cleverly delivered in an understated but convincing way.

The playing and singing had been of the highest order and we left with a greater understanding of both Purcell and this particular opera of his. I am even inspired to have a re-read of some of Dryden’s poetry that never made it on to my shelves of Blake, Wordsworth and Robert Frost.

Admission to this excellent evening had been only 12 euros and the hall, somehow dark and medieval in itself, was just about full.

When we first arrived to live on the island a couple of years ago we would have been surprised to enter a performance of King Arthur by H. Purcell into our diaries. However, checking our diaries for the following night, we found four words we would never have expected to see written in the same sentence, let alone in our diaries.

There, above, are the four words to which I refer. As we would certainly have said to ourselves when living in the North of England for all our lives,… “ ‘ood ‘o thunked it?”

It was on Miguel’s web site that we had seen an advertisement for this free concert, being staged at Tias Teatro on Monday 11th June.

We have come to learn that free concert means prospective audience members should arrive early and that free tickets will be allocated until the hall is full. When we stepped into the foyer, to join only maybe half a dozen people, it didn’t look likely that there would be a full house. However, by the time the doors opened twenty minutes later, there was quite a queue behind us, and by the time the lights went down half an hour after that, there were hardly any seats not taken.

Led by musical director Jesus Cabrero, fourteen or fifteen ladies, and one young man, walked on stage and formed a line. This choir, unlike last night’s, was dressed all in black, as was its director. His seat and keyboard were to the left of the line and from the moment he hit the opening note and the choir soared as one voice, we knew were in for a real treat.

However, after only a few opening bars, Jesus stopped playing, quieted the choir and spoke directly to the audience, reminding us of our obligations to join in with the choir with gusto and follow his directions for ‘call and response’ sections. He rehearsed this with us and the choir a few times and then started the performance of Freedom all over again. It was an amazing outburst of joyous energy, as choir and audience urged each other on. Soon we were all clapping along, swaying, waving our arms and hollering and whooping. The oft repeated line of ‘like a motherless child’ reverberated around the arena.

I have a problem when listening to Spanish artists talk. They speak Spanish ! And not only that, but they speak it very quickly. So I can’t always be sure of what I’ve heard but I thought I then heard Cabrero reference the Soweto Ladies Choir, whom we had seen perform in Manchester twenty odd years ago with Ladysmith Black Mamboza. The song that followed, about the resurrection, with a repeated refrain about how ‘Jesus died and rose again’ certainly had the sound of the kind of negro spiritual that would have been performed around the South African townships in the middle of the last century.

It was, however, a song written in the middle of the last century that set the night on fire. Once again Mr. Cabrero led complicated sung dialogue between choir and audience as the second solo singer of the evening led us through a gorgeous version of Lennon and McCartney’s let it be.

For the next offering the musical director who, in his black baseball cap and low hung jeans, looked more like a street rapper than a gospel singer, set his instrument to play some pre-recorded percussion whilst he leapt in to join the choir and lead them in their singing of Why I Love Him.

I have always loved gospel music but have also always taken note of songs that might not quite be characterised as such, but that strike that same chord. Let it Be had already been one example of that, and with the next number I was reminded of a John Stewart song called Friend Of Jesus. The Lanzarote Gospel Choir here sang I Am A Friend Of God.

Demonstrating all that gospel music should be, joyful and uplifting support came from the choir for a (third of the night) solo singer who was contemplative and plaintive in her delivery of Let Me Wait For You.

The place was rocking like a jazz house in Harlem as a fourth soloist led us through Thank You Jesus. Every member of this wonderful choir was singing and smiling as if the very performance of these songs was a celebration of life.

The musical director had fun with all his cast and all his audience on the final number of the night, as he initiated harmonies, call and response and rhythmic hand claps from the audience to support The Lanzarote Gospel Choir to a rhapsodic delivery of Oh Happy Day, once such a big commercial hit for The Edwin Hawkins Singers.

As shouts for an encore grew louder I looked back from our front row seats to note that the house had indeed filled up, and that nearly everyone was on their feet offering an ovation.

Mr. Cabrero, ever the showman, but also ever the shepherd of his musical flock, invited all his singers to sit on the front of the apron of the stage and invited the audience to take photographs and selfies with the singers. To see little girls rush to the stage to sit on their mums’ (or grannys’) knees was genuinely emotional. Some audience members seemed astonished at what their friends and relatives had achieved. We who didn’t know any choir members personally could only applaud them as the stars they were, in acknowledgment of an excellent performance.

Don’t take my word for this though. Find them on facebook by typing in Lanzarote Gospel Choir to see how well they delivered and how inspired they were by musical director, and obvious mentor, Jesus Cabrero.