Joni Mitchell Would Love Them 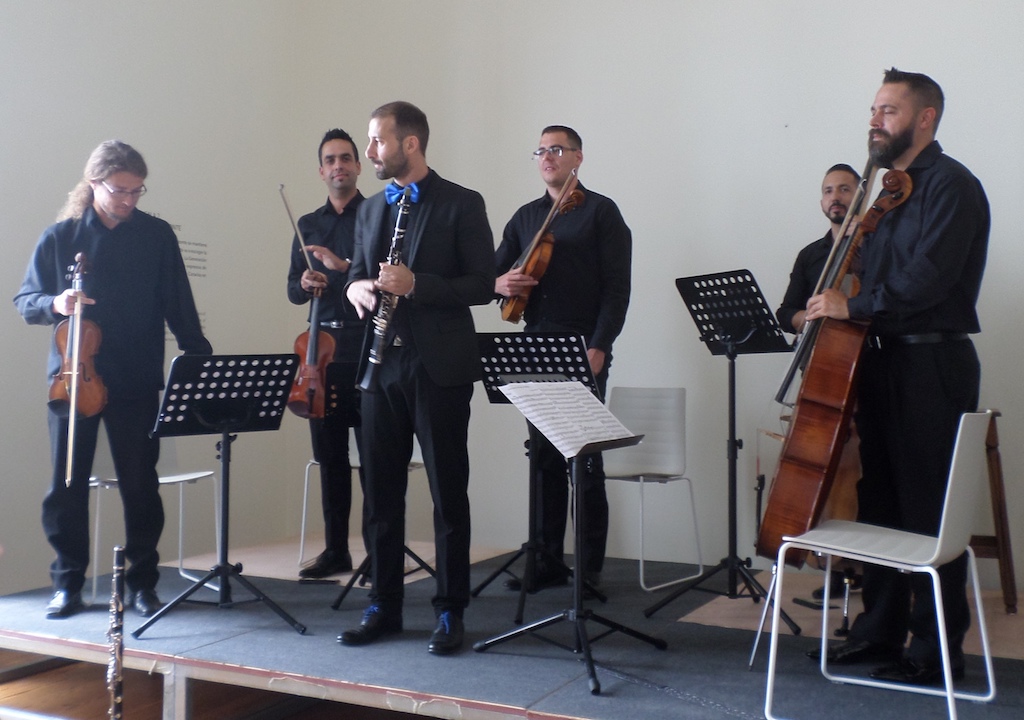 A desire to take classical music out on to the streets and to sites that make it accessible to a non traditional classical audience has long been the driving force behind this group that is a small extraction from The Orquesta Classica de Lanzarote. It is that determination to ‘take music to the people’ that saw them deliver this free concert at Casa de la Cultura Augustin de la Hoz in Arrecife as part of the Clasicos Populares series.

They must have been delighted to step out to an audience of more than a hundred people gathered in the upstairs room, with its wide windows offering superb views over the beach and out to sea.
This concert, though, offered a string quintet and clarinet to perform works by a range of diverse composers.

Mozart’s Pequena Serena Nocturne allowed the two violins, viola, violinchelo and contrabajo (double bass) to demonstrate a wonderful lightness of touch with some playful work on the contrabajo before it all reached a percussive climax.

Vals venezolano by Paquito de Rivera was delivered in a polite and seemly fashion by Luis Montesdeoca on first violin, Carlos Marrero on second and Ayoze Garcia on viola, standing on the sturdy platform provided by Ivanoff Rodriguez on contrabajo and Antonio Leon on violinchelo.

The second part of this piece, Contradanza, saw the quintet joined for the first time by their guest artist. He wasn’t quite Elvis Presley wearing Carl Perkins’ Blue Suede Shoes but Ayoze Rodriguez was a flamboyant figure of sartorial elegance.

The members of the string quintet behind him were all dressed in open necked black shirts, razor-creased black trousers and highly polished black slip on shoes. Ayoze, however, was even more resplendent, with a huge neon-blue bow tie, matching the neon-blue frames of his spectacles. His shoes were lace ups, with the neon-blue of those laces complementing his glasses and neckwear. It was fascinating to then hear how he soared and swooped his clarinet notes around the beautiful delivery of this piece from the quintet.

I was delighted to find an offering by Greig, one of my favourite classical composers. Opening without the contrabajo, the birds outside the building seemed instead to join in and complement the depth of the violinchelo. There were the usual sweeps and longeurs we find in Greig’s best works and here in this wonderful venue I found it somehow reminding me of day’s awakening. This mix of bird song and music hauntingly echoed a sound-scape concert of a few months ago by Nordic Sounds, as part of The Canary Islands’ 34th annual international classical music festival.

Por una cabeza is a twentieth century work by Carlos Gardel and was lent support by the assertive but playful contrabajo.

The centrepiece of the concert came next, with Oblivion by Astor Piazzola. The piece felt introspective, perhaps even regretful, but was lightened by a clarinet work that echoed to me of Stranger In Paradise, written by George Forrest and Robert Wright for the musical Kismet, first performed in 1953. This famous tango of Piazzola’s was not actually written until 1982, when he recorded an album of the same name.

El Oboe de Gabriel, was introduced as music that spoke to the masses, and was opened by a solitary violinchelo. The clarinet led the rest of the ensemble to join in on this gorgeous piece by Ennio Morricone. The composer and trumpet player might be best known for The Good, The Bad And The Ugly, but this was definitely ‘the good.’
Caballeria Rusticana, composed by Petro Mascagni, seemed to reflect a walk by a shoreline, or beside a river or through a mountain pass. As I wondered whether or not this was a landscape trail remembered, or imagined (by the composer, or me, the listener) or was simply a track waiting to be created, the music took me on the kind of fanciful walk I often follow when listening to such evocative pieces.

Luigi Boccherini composed Night Music Of The Streets Of Madrid and its title alone must have made this an obvious selection for these musicians who so want find a wider audience for classical music. There was more pizzicato playing here, as there had been on Caballeria Rusticana, but here the strings on the violins were not only plucked in the usual pizzicato style but also strummed gently in guitar manner.

Carl von Weber seems to feature in a few classical concerts we see over here but his is not a name I recall ever appearing on a playlist at the concerts we used to attend in the UK. I have remarked in previous reviews how much I love those pieces of his I have heard, and here, the first movement of Concierto number 2 en Mib para clarinete was an offering that will have me seeking out his cds on amazon, as I can’t find a cd shop on Lanzartote anywhere. If any reader out there knows of one, etc etc.

This gloriously elegant and reverential concert had been delivered with such a sense of fun, and Nube de Hielo by Benito Cabrero was similarly performed by all six musicians soaring to new heights and plumbing new depths, as if chasing disobedient daydreams, before closing on a high note of seeming celebration.

Apart from rapturous applause between the musical pieces the concert had been delivered to an attentive audience, most of whom seemed familiar with the range of music on offer, and absolutely everyone looked as if they had found this musical buffet to their taste.

I’m probably less familiar with classical music than anybody else in that audience but if it truly is the aim of the Quinteto Orquesta Clasica del Lanzarote to educate and enthuse people towards classical music then, with me at least, they have hugely succeeded. They, and other performers over the past couple of years, have turned me into a devout fan of Von Weber, for example, and this concert has also sent me back to my the Spaghetti Western music of my youth.

Ayoze, the clarinet player, had introduced most of the works here, and had done so with a passion and wit that was much enjoyed by the audience. He seemed to suggest that the choice of the (beseechingly demanded and massively deserved) encore number was that of the contrabajo player and the musicians had accepted Ivanoff’s suggestion.

As we listened to a piece that seemed to offer great scope for interpretation and exploration by the violin section I found myself suddenly humming along to,….it would come to me,…..was this Chopin,…..no,… it was Coldplay and Chris Martin,…… Viva La Vida.

And viva la vida we do indeed here in Lanzarote, where we move almost nightly from clasicos populares to a rock on the beach and Smoke On The Water, but more of that in our next review.

For now, suffice to say that this was some of the world’s best music played with real emotion by massively accomplished musicians. As Joni Mitchell would surely have said, while some people were out in the up market stores ‘shopping for jewels’ this wonderful collection of musicians were just round the corner, delivering their lunch time concert, and were ‘playing real good, for free.’