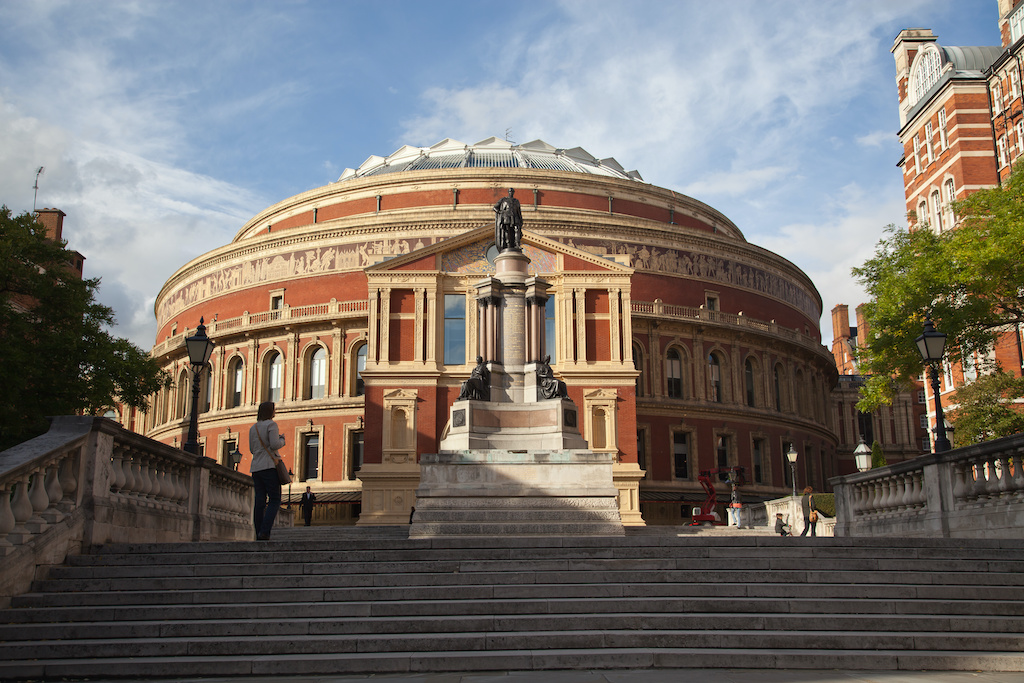 It seemed strange, notwithstanding social distancing behind closed doors and the omnipresence of covid19, to be watching The First Night Of The Proms knowing that the Last Night of the event, still some fourteen days away, was already being overshadowed by argument over what lyrical and musical content might or might not be acceptable in these days when we are all wrestling with our conscience. Nevertheless Katie Derham presented a ninety minute programme to celebrate the first night of ´the world’s greatest live classical musical festival ´with a feast of music that included Beethoven’s third symphony, Aaron Copland’s Quiet City and a new work by young British composer Hannah Kendall, all delivered by the BBC Symphony Orchestra (spread across the entire expanse of the stage) and the BBC Singers, who rose to perform from widely spaced seats in the stalls !

I was watching this on BBC 2 on a Saturday night because the live arts here on Lanzarote had just gone back into hibernation partly because Covid19 seemed to stalking more menacingly on Lanzarote at the moment and our tickets for the Tonin Corujo timple concert we had been so looking forward to at Teatro El Salinero will be better enjoyed, anyway, when this virus recedes.

However, whether live or on tv, the arts continue to provide comfort and solace throughout these troubled times. I think Katie and her guests, the composer Ayanna Witter-Johnson and Stephen Fry, struck just the right tone.

Ayanna Witter-Johnson is a British composer, singer, songwriter and cellist. Her notable performances include opening for the MOBO Awards “Pre-Show” in 2016, and playing the Royal Albert Hall, London, on 6 March 2018.

Stephen Fry, of course, is the English actor, comedian and writer. He and Hugh Laurie are the comic double act Fry and Laurie, who starred in A Bit of Fry & Laurie and Jeeves and Wooster. Now a writer and former presenter of QI, Stephen is now known also for his active support of the arts.

Clearly delighted to have any event to watch and to discuss at all, the presenter and guests spoke eloquently of the importance of such music to human-kind and yet managed to avoid being too reverential.
At one point Fry answered a question from the presenter about what a particular piece was trying to say.
´Music isn´t about anything,´ he responded, to her obvious surprise. After a delightfully timed comic pause for effect, however, he concluded, ¨music is about everything !´

He eloquently explained Beethoven’s Eroica as being composed by a man hero-worshipping Napoleon and his cause only to arrive at the conclusion he might have been hero-worshipping a subject with feet of clay, who on overcoming his enemy, then himself took advantage of a class system he seemed to so despise. Fry pointed out the rage and anger and disappointment we could detect in the final movement.

I was particularly enthralled by a piece, or should that be peace, called Sleep, by Eric Whitacre, an American composer and conductor. He is also a speaker known for his choral, orchestral, and wind ensemble music. In March 2016, he was appointed as Los Angeles Master Chorale’s first artist-in-residence at the Walt Disney Concert Hall.

Sleep was delivered beautifully by the BBC Choral Singers. Not only did the work remind me of some of the sonic landscapes I have heard performed live here on Lanzarotge by Nordic Voices but it also served as a neat juxtaposition to Quiet City by Aaron Copland.

I have been swept away by the better known and more grandiose compositions by Copland, of course, that take us through an America of his time of new frontiers and rapid gentrification.

This work, though, is from a completed city, enjoyed by residents for its busy day and Quiet Night, who perhaps recognise that quiet does not mean silent. This is a night in a city that falls asleep to the lullaby of Broadway, that even in the wee small hours will be home to a melancholy drunk asking the bartender to ´set ´em up Joe, ´cos I got a little story I want you to know.´

There was an element of listening to the sound of one hand clapping when the musicians and orchestra applauded each other at the end of segments, but thank goodness the beeb didn’t superimpose the recorded crowd effect noises that seem somehow superfluous even when added to sporting events.
The delight on the faces of composers, instrumentalists and vocalists at being able to play music together again, even under these strange circumstances, was sufficient reward for the dedication of so many people who had worked so hard to bring all this together.

Hannah Graham, the composer of the first piece to be played, “Tuxedo: Vasco de Gama”, being given its world premiere performance, was invited to explain her creative process on the work. She spoke of how she was inspired by the anarchic art of Jean-Michel Basquiat to create a five-minute hymn to multi-culturalism.
For me it was a gentle, allusive piece, creating an agreeable sound world with unexpected instrumental juxtapositions, and including a harmonica and a tiny cardboard musical box. The harmonica is perhaps not a traditional orchestral instrument but it certainly made an intriguing contribution to the work, adding what I can only describe as an antiquated modernity to the soundscape we were hearing.

We were then given a wonderful rendition by the BBC Singers dispersed round the auditorium of the Royal Albert Hall, of “Sleep”, Eric Whitacre’s a cappella setting of a Charles Anthony Silvestri poem, and it certainly proved soporific and quite extraordinary.

Fry told us, somewhat foppishly that he ´loves listening to this work while lying on a bed of grass´.
As for Copland’s Quiet City I agreed with Katie Derhem’s assertion that it was ´extremely moving,´ even if she told us, noted a subsequent reviewer, somewhat in the manner of a nineteen fifties primary school teacher.

The climax of the evening was the performance of Beethoven’s Eroica which I enjoyed not only for its playing but also for the sense of enlightenment (if indeed there is such a thing, but that’s another philosophical debate) that I gained from Fry´s understanding of the work.

The programme was brought to a close with Sakari Oramo conducting the BBC Symphony Orchestra in Beethoven’s Eroica Symphony. As the cameras flit dutifully from player to player, and from the interior of the hall to the streets outside, this Herculean work becomes tamed and marginalised, its last movement seeming, thanks to a very slow tempo, to be interminable. Each of these pieces has been diminished, rather than augmented, by the camera work imposed on it, and by the super-added chatter in the gilded box.´
´This concert has been like water in the desert,´ Fry concluded gratefully, while a scattering of applause by the musicians congratulating and encouraging each other ran round the auditorium, as if to remind us that even in the desert (or on a Lanzarotean beach) our footsteps in the sand must remain socially distanced for the foreseeable future.

There were critical reviews the following day of camera work that seemed too energetic, and, unfairly I felt, of Katie Derhem’s presentational manner.

There were broadsheet writers, too, who quibbled about the selection of guests and even the choice of music and it was hard not to think some writers were simply throwing at an easy target.

The BBC has made something of an ass of itself by its self- aggrandising, whilst at the same time mealy-mouthed, justifications of decisions that lyrics to Jerusalem and Rule Britannia will not be delivered on The Last Night Of The Proms next week. This has upset many Proms followers who think these songs are in some ways hallowed and traditional inclusions in the Proms. It might be argued though that the history of The Proms shows that often, what is considered traditional, became a regular feature far more recently than is assumed.

Most traditions, be they in the creation, performance and acceptance of classical music in the affections of the masses at events that are but glorified street parties, have become established only after long periods of evolution and revolution.

If the country of my birth still wishes to be known as a Land of Hope And Glory then it must become as resilient and receptive to change as had been the case with all the music and the musicians we saw on our screens at the First Night Of The Proms.