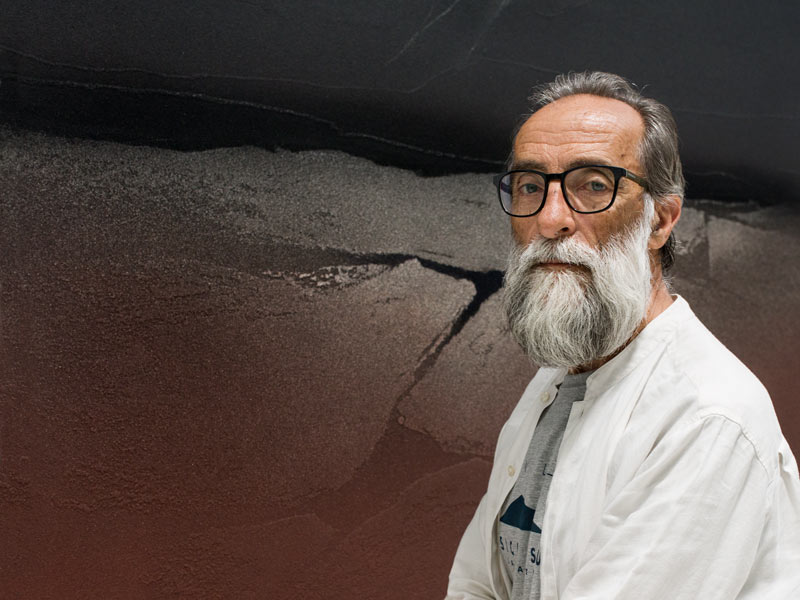 The artist, Ildefonso Aguiler de la Tua, who captures the natural essence of the island in his intuitive and fascinating creations, was made an honorary citizen of Lanzarote in 2017. As a painter, photographer, music-and-video-maker he speaks eloquently and proudly about, and sometimes on behalf of this island and I have featured him regularly in previous articles here in my weekly column at Lanzaorote Information on-line.

On the first of our many annual holidays on Lanzarote we became aware of the late artist, Cesar Manrique. We couldn´t help but notice the countless ´wind toys´ he created to adorn the roads and roundabouts and, like millions of tourists before and since we visited his former home, his studio and the caves he transformed into under-sea theatres. Since coming to live here in 2015, however we have realised that that there are generations of artists who follow in his footsteps sharing not only Manrique´s love and respect for Lanzarote and the arts but also his curiosity about its relationship with nature and how that balance can be sustained.

Ildefonso is among that new generation. He is a multi-disciplined artist, who works in the fields of painting and photography and is a maker of music and video formatted work.

Speaking recently to Lanzarote viva, a quarterly print-media glossy magazine and on line site, Ildefonso was asked which of these is his preferred medium.

´They are basically complementary,´ he responded. ´Although I must admit it has been painting that has been my main work process, whereas my painting and my music tend to revolve around that. In fact, for me, sound possesses an extraordinary beauty and its something I have spent a lot of time recording and working on. It has driven me to create compositions that border on the abstract but which capture the reality I want to express. That´s why it has always been there, as a means of heightening my expression, whenever painting has not been enough to exprhess whatever it is I hear the landscape saying to me.´

His interviewer then asked whether Ildefonso paints through observation or through an intuitive connection.

´I look for its essence and try to convey what is beyond. I´m interested in what is not seen in plain sight; The latent inner-landscape within. I want to what is projected on the surface. I find landscapes incredibly moving. Not all of them, of course, but there is often some sort of emotional reaction that takes place and that I don´t try to rationalise. This happens with the landscapes of Lanzarote, and over the past twenty years, has also happened during my studies of the landscapes of Iceland. These landscapes have managed to stir something deep inside me in a very powerful way. I search for sensations and I extract them but not always in a visual way.

Fragments and unreal representations of these landscape do appear in my work, too. Patches of realism also appear occasionally, but generally they occur in spaces that are completely imaginary and have nothing to with whatever is in front of my eyes but is the way I feel like capturing them, I feel they resonate more.´

This invited a further question about whether the artist talks to Lanzarote landscapes and, if so, whether he can capture what it whispers in reply and then relate that to his audiences.

´Obviously I communicate with landscape. I even communicate with the sea of black lave I can see from my studio. it is inexhaustible and constantly re-newing. There´s a kind of constant ecstacy to be had from the immense fascination and admiration I feel for the landscape in Lanzarote´.

Federico Castro Morales, in his work in Deserts And Malpaises writes that, ´these sands, torn from stone, are erratic particles that wander around the island´ and this prompts the interviewer from viva to wonder whether Ildefonso sees himself in a similar light, as ´an erratic particle wandering round the island.

At first Ildefonso laughs at the notion, but then gives it more thought.

¨Well, yes. I suppose I can identify with that description, because of the way I live, feel, enjoy and admire and interact with the landscape here´.

Larry Yaskiel, the honorary editor of Lancelot magazine, recently sent me a copy of a ´musical´ recording made by Ildefonso that, like much of his visual work, seemed to have come from somewhere before time began and yet somehow also sounded futuristic. My wife Dee and I have been taken on a guided walk of one of his exhibitions at Cic El Almacen by our favourite art connosieur, Estafania Comojo, who showed us a documentary full of the artist at work, on a broad ´canvas´, sifting and shifting, brushing and blowing and colouring sand and fragments into a landscape that, like Lanzarote itself, was fractured, fissured and somehow both fearsome and lightly fearful. Lanzarote has learned from the volcanic eruptions of almost three hundred years ago, just how fragile a landscape can be when subject to disturbance and how a rupture can change a landscape forever.

Even though we have previously featured Ildefonso here on Lanzarote Information I don´t think I can claim, (and perhaps neither can anyone else) to know him at all. His work is revelatory, though whether that is in reportage or fore-warning I do not know. His relationship with the land and nature seems almost sacred. He seems to find the landscape both admirable and awe-inspiring.

And actually that final phrase above perfectly captures the way I feel about his work and its haunting qualities.

In as article, Artists, Galleries, Curators And Guides posted in my daily blog at Sidetracks & Detours on 5th August 2020 (and still freely available in our visual arts archives) I said of Ildefonso´s work that ´it is dark and sombre and seemingly introspective. His works are often created on huge, frameless and imposing canvasses but Estefania´s eye for detail identified for us the uniqueness of technique and showed how minutely, and accurately, the works seem to interpret the landscape from which they grow´.